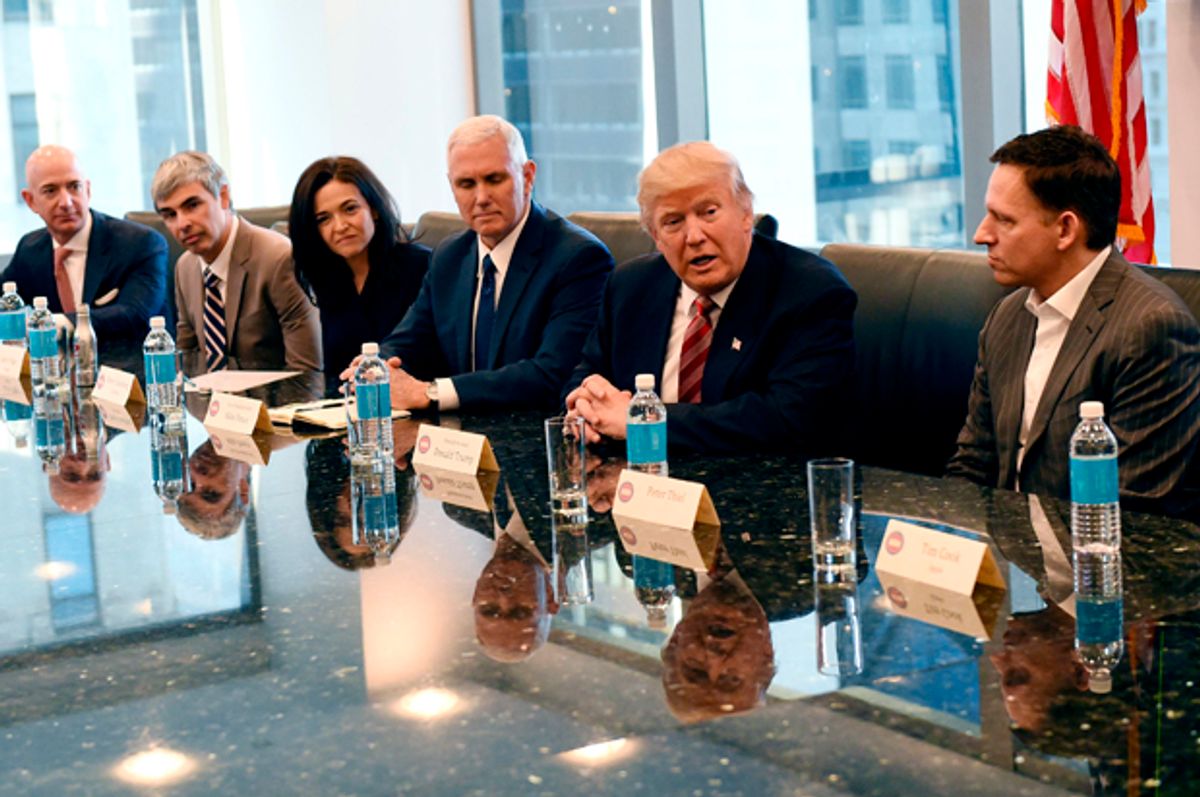 The centerpiece of the two tax cut bills that are wending their way through Congress is a large reduction in corporate tax rates. According to the White House and other conservative advocates of “supply-side” economics, lowering costs for businesses will encourage them to invest the savings they’ll get into their operations, hiring new workers and starting new projects.

It’s certainly possible under some scenarios that large tax cuts could stimulate such behavior but there are no real indicators that such a policy would set off a domestic economic boom. In fact, there are several that indicate that giant tax cuts wouldn’t have much of any effect.

White House economic policy adviser Gary Cohn saw one such indicator firsthand on Tuesday during a panel discussion at a conference for CEOs put on by the Wall Street Journal which featured he and a number of other prominent government and business leaders.

During a segment featuring Cohn and two other Journal editors, moderator John Bussey decided to take a poll of the business executives in the room about what they might do with extra money that would be freed up from the GOP’s tax cut plan.

“If the tax reform bill goes through, do you plan to increase investment?” Bussey said as he asked the assembled CEOs to raise their hands if they were considering doing so.

Almost none of them did so. The result clearly spooked Cohn. “Why aren’t the other hands up?” he asked with a nervous laugh. Rather than prolong the inconvenient moment, Bussey decided to move on to another question.

The Journal editor’s informal survey belied what Cohn himself had said just days earlier about what he claimed CEOs were telling him about tax cuts.

“The most excited group out there are big CEOs about our tax plan,” Cohn, a former Goldman Sachs executive, told CNBC last Thursday.

It’s possible that the executives weren’t interested in raising their hands after a long day of droning speeches but there are other indications that the informal survey was not just a fluke.

In 2004, former president George W. Bush and congress temporarily lowered corporate tax rates in an effort to encourage companies to bring back overseas profits and reinvest them in America. Instead, according to Bank of America estimates, companies spent around 80 percent of the money repurchasing their own stock.

More recently, a formal poll of CEOs conducted in the summer by Bank of America and Merrill Lynch about the idea of temporarily relaxing corporate tax rates in an effort to encourage companies bring back profits earned overseas found that 65 percent of executives wanted to use the money to pay down their corporate debt.

Next on the list were stock buybacks. Both strategies did little to boost America’s economy but were beneficial to booting share prices.

“Companies want to get their money back to buy stock and goose the stock price because their senior executives derive so much of their compensation from the stock prices,” Edward Kleinbard, a tax law professor who formerly headed up Congress’s nonpartisan Joint Committee on Taxation told the Washington Post. “Their motives are completely suspect.”

In third place was mergers and acquisitions, a process which frequently results in fewer jobs when companies decide to consolidate duplicative departments.

Beyond the fact that CEOs claim that they are less interested in investing their tax cut money, there is the other inconvenient fact that most companies themselves were not actually paying the official 35 percent corporate tax rate. It is widely conceded by people of all ideological stripes that the rate that most businesses pay out is about 24 percent, which is only slightly higher than the official rate of most developed countries — 21 percent.

But there's still a political motive. Congressional Republicans have repeatedly admitted they are facing pressure from their financial contributors to cut taxes.

“My donors are basically saying get it done or don’t ever call me again,” Rep. Chris Collins of New York said earlier this month.

South Carolina Sen. Lindsey Graham claimed the GOP will face a political apocalypse when asked what would happen if it doesn’t push through its tax cut plans.

"The party fractures, most incumbents in 2018 will get a severe primary challenge, a lot of them will probably lose, the base will fracture, the financial contributions will stop, other than that it'll be fine!" he told NBC last Thursday.