New twists in the trial of Kate Steinle's killer, which became a political football for Trump in 2015 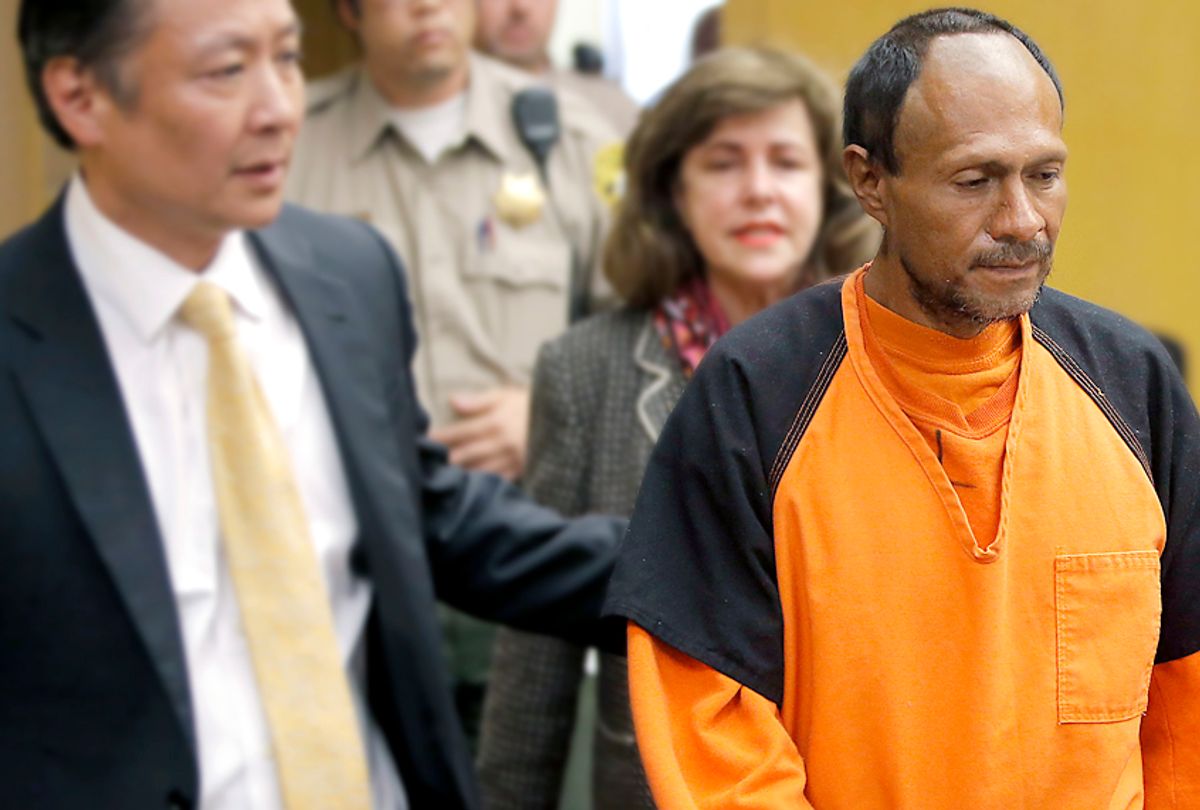 A first-degree murder charge is now a potential verdict jurors can rule on in the trial of a man who shot and killed Kate Steinle, which is set to begin closing arguments on Monday.

The case gained national notoriety in 2015, when then-candidate Donald Trump referenced it prominently in his speeches, in order to bolster support for his agenda of immigration crackdowns and the construction of a wall along the U.S.-Mexico border.

On July 1, 2015, Kate Steinle was walking on San Francisco's Pier 14 with her family when she was fatally shot, according to KPIX 5. The weapon used in the shooting was stolen from the car of a U.S. Bureau of Land Management ranger only days earlier and was later recovered in the Bay near the pier. Jose Ines Garcia Zarate, a homeless Mexican citizen, was arrested an hour after the incident occurred.

Garcia Zarate, 45, was charged by prosecutors with second-degree murder, which means that the murder was deliberate yet not premeditated.

"The jury will be instructed on multiple theories of homicide," Alex Bastian, as spokesman for the District Attorney’s Office told KPIX 5.

On Wednesday, Judge James Feng granted a request by prosecutor Diana Garcia to allow the jurors to be instructed regarding what a first-degree murder charge would mean. The charge is typically only levied for murders that are presumed to be likely premeditated and with a clear motive.

Garcia Zarate's defense attorneys, Matt Gonzalez and Francisco Ugarte, have attempted to argue that he found the stolen gun, and that it discharged and a single bullet ricocheted off the pier which then hit Steinle in the back. The attorneys "presented expert witnesses who testified that the shooting bore the hallmarks of an unintentional discharge and that the bullet did not travel in a straight line," KPIX 5 reported.

"We are not terribly concerned about it because nothing in the evidence supports first-degree murder," Tamara Aparton, a spokeswoman for the public defender's office said.

Garcia Zarate has a criminal history, and has been convicted of a drug charge and for reentering the country after he was deported, KPIX 5 reported.

The murder was repeatedly touted by disgraced former Fox News anchor, Bill O'Reilly, as the reason Trump's immigration agenda was what the country needed. Yet Kate Steinle's own brother, Brad Steinle, expressed dismay at how his sister's death had become a political football wielded by the right. "If you're going to use somebody's name and you're going to sensationalize the death of a beautiful young lady ... Maybe you should call and talk to the family first and see what their views are ... Sensationalizing it is not the route we would like to go," Brad Steinle said in July 2015.

During political rallies and debates Trump fueled support for his campaign by railing against undocumented immigrants and sanctuary cities like San Francisco, while painting Mexicans broadly as criminals.

In an Ohio rally this past July, Trump said in a speech:

And you've seen the stories about some of these animals. They don't want to use guns, because it's too fast and it's not painful enough. So they'll take a young, beautiful girl, 16, 15, and others and they slice them and dice them with a knife because they want them to go through excruciating pain before they die. And these are the animals that we've been protecting for so long.