A sheriff sparked a free-speech controversy on Facebook, the ACLU clapped back and now the driver is facing charges 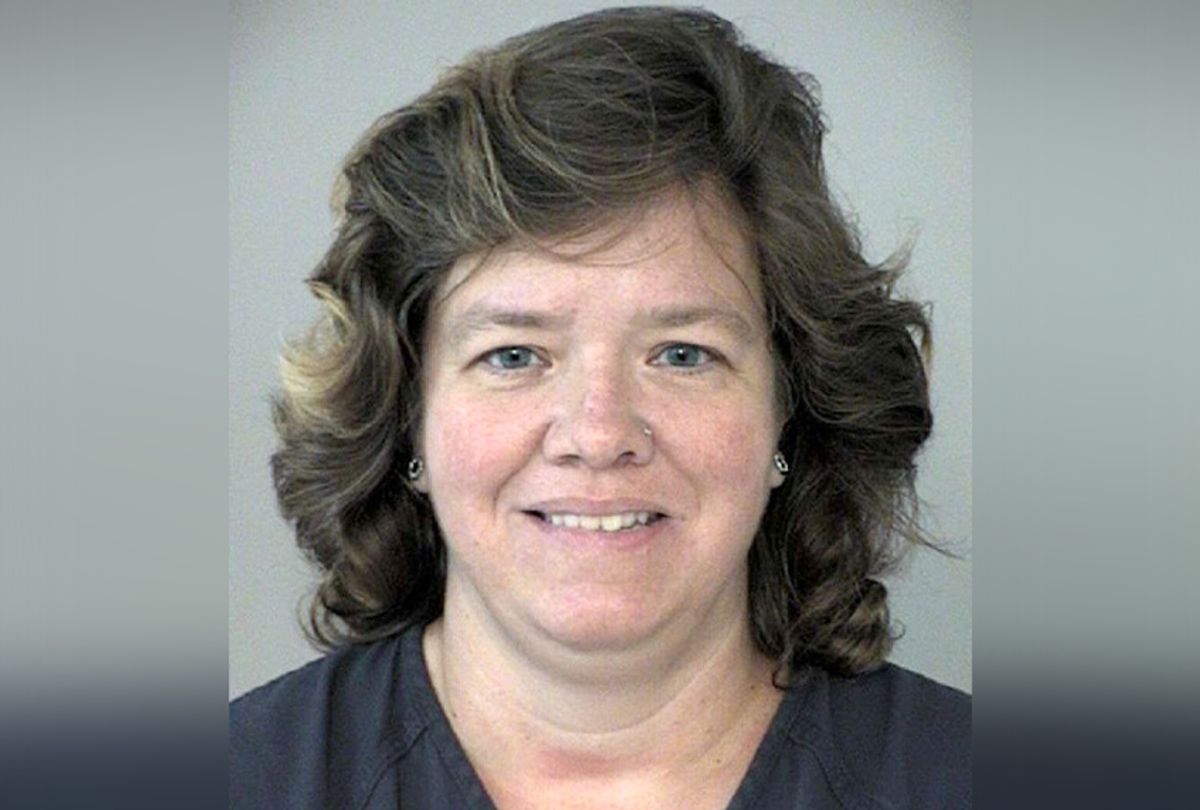 After the inauguration of President Donald Trump, a Texas couple decided to emblazon their GMC Sierra with a brusque message: “F**K TRUMP AND F**K YOU FOR VOTING FOR HIM,” complete with a depiction of a middle finger.

The driver, Karen Fonseca, has now been arrested on an outstanding warrant, issued in July 2017 in connection to a 2015 case of possession and use of a fake ID, according to the Houston Chronicle.

Fonseca told KHOU-TV that she believes the sticker played a role in her arrest, and told CNN that she and her husband, who owns the truck, just wanted to express how they feel. “We wanted our statement out there. That's our opinion on him.”

She also said that the sticker has made her a target for cops, who have pulled her over several times "but failed to find a reason for writing a ticket," wrote the Houston Chronicle.

The decal sparked controversy when Fort Bend County, Texas sheriff, Troy E. Nehls — whom Fonseca says she used to work for — posted an image of it on Facebook claiming that he was searching for the then-unknown owner of the truck.

“I have received numerous calls regarding the offensive display on this truck as it is often seen along FM 359,” he wrote. “If you know who owns this truck or it is yours, I would like to discuss it with you. Our Prosecutor has informed us she would accept Disorderly Conduct charges regarding it, but I feel we could come to an agreement regarding a modification to it.” 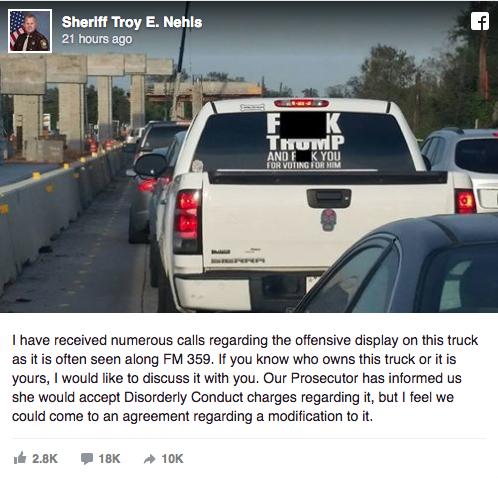 The post drew thousands of comments, some applauding Nehls and others criticizing him for impinging the driver’s First Amendment right to free speech.

BuzzFeed News quoted some Facebook commenters; one wrote: “I've seen this truck, and I would [be] pleased if the owner of this vehicle was prosecuted for disorderly conduct. My children saw this, and I was infuriated they were subjected to this offensive display”— another took the opposite approach: “I voted for Trump. F**k this sheriff. The first amendment applies to ALL Americans! I hope the truck owner sues the pants off of this clown.”

Nehls came to his own defense with a screenshot of Texas’s definition of disorderly conduct, which reads in part: “A person commits an offense if he intentionally or knowingly: (1) uses abusive, indecent, profane, or vulgar language in a public place, and the language by its very utterance tends to incite an immediate breach of the peace.”

But the American Civil Liberties Union of Texas was quick to shoot back in another post: “You can’t ban speech just because it has ‘f@ck’ in it,” they wrote, followed by a citation of the 1971 Supreme Court case, Cohen v. California, in which the court overturned a man’s conviction for wearing a jacket that read “F**k the Draft” in a courthouse.

Nehls, a Republican who plans to run for Congress, according to the Houston Chronicle, did not get any defense from local District Attorney John Healey, who is also a Republican.

"I did not believe it was a prosecutable case based on the definition of disorderly conduct," Healey said of the “F**k Trump” sticker.

Nehls deleted his Facebook post on Thursday because “the owner of the truck has been identified,” said the Fort Bend County sheriff’s office in a statement. He also claimed that he had been receiving hate messages toward his wife and children that stemmed from the Facebook controversy.

On Wednesday, Nehls held a press conference to address his actions, going back on his threat and recognizing free speech, but also voicing concern that the sticker could cause distracted driving, adding that “I think now it would be a good time to have meaningful dialogue with that person and express the concerns out there regarding the language on the truck,” according to the Associated Press.

Fonseca was held at $1,500 bail and released from jail after her husband paid on Thursday night, reported Time. She said she doesn't plan on taking the sticker down, telling CNN, “I'm not going to remove it because I know I'm not violating any laws or rules.”