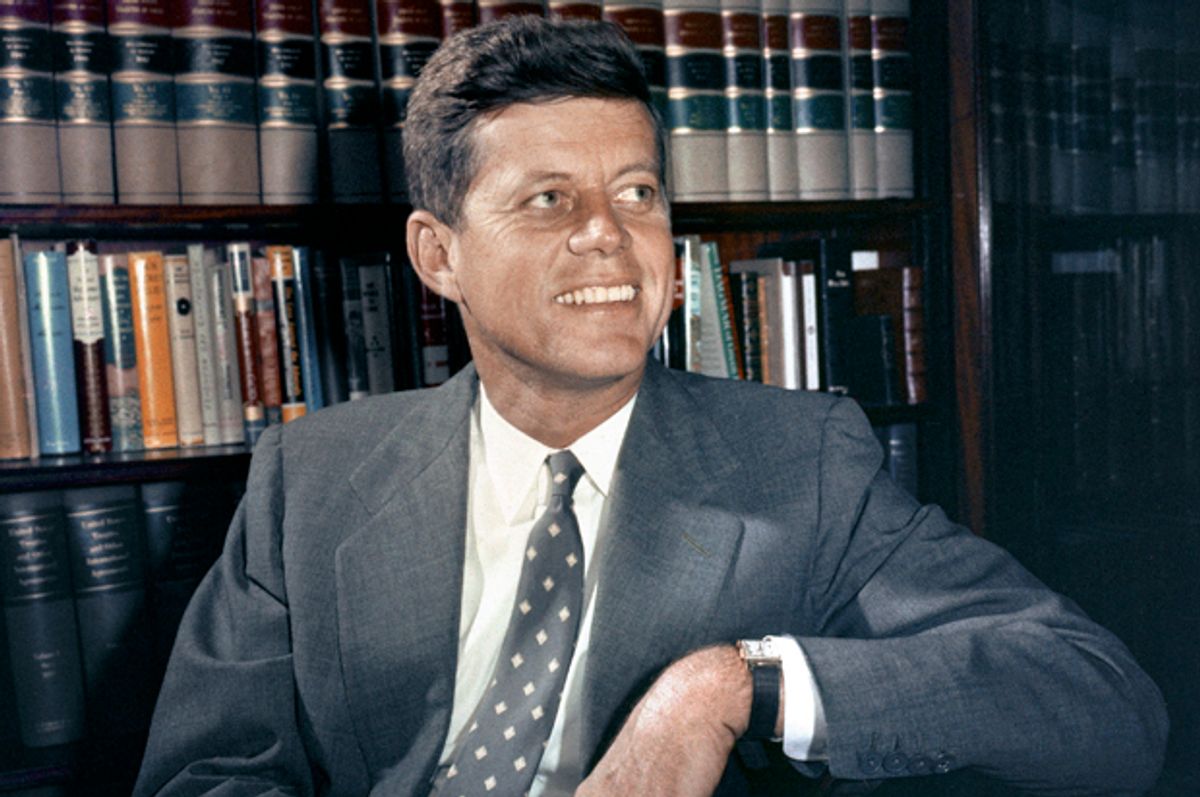 The government’s release of long-secret JFK assassination records is generating headlines and hype worldwide. But the truth is the majority of the JFK files that were supposed to be released last month remain secret — and may forever if the CIA has its way.

On October 24, President Trump tweeted that "JFK files are released long ahead of schedule," which was not true.

In fact, as Rex Bradford, president of the Mary Ferrell Foundation, pointed out in WhoWhatWhy, only about 10 percent of the JFK files were public by the statutory deadline of October 26. The foundation maintains an online collection of more than 1 million JFK records.

The hype continued November 3, when the National Archives posted more than 553 CIA documents never made public before, which CNN described as a “horde." On November 9, the CIA and NSA released another batch of files, which the Washington Post called a "huge trove."

But as Bradford told AlterNet this weekend, the impressive-sounding numbers lacked context. Even after the latest file dump on November 9, at least two-thirds of the never-seen JFK files that were supposed to be released — some 2,538 records — remain secret, according to the foundation's analysis.

At least one-third of the JFK files that were previously released with redactions — a total of about 12,000 files — have still not been made public in unexpurgated form, he said.

Unlike mainstream news organizations, the Mary Ferrell Foundation monitors the National Archives database for the latest information on what has and has not been released. Bradford called the releases so far "a big roiling mess."

What Are They Hiding?

The still-secret files document the careers of five top CIA officers implicated in the events that culminated in the murder of the popular liberal president in Dallas on Nov. 22, 1863.

The publicly available portions of these files do not contain “smoking gun” proof of conspiracy. But they do refute the official story that Lee Harvey Oswald acted alone and unaided. While incomplete, the new JFK files show that Oswald did not act alone in the years, months and weeks leading up to Kennedy's murder. The files confirm he acted while being monitored and surveilled by top undercover CIA officers.

Four of these five officers knew of Oswald’s personal history, foreign travels and contacts with a presumed KGB officer in Mexico City six weeks before Kennedy was shot and killed. They include:

1. James Angleton: The legendary chief of counterintelligence testified to Senate investigators behind closed doors in September 1975. The 155-page transcript of his comments is still secret in its entirety.

2. Birch O’Neal: Virtually unknown in the vast literature of JFK’s assassination, O’Neal played a key role in the CIA’s monitoring of Oswald. As an aide to Angleton, O’Neal ran a secretive office known as the Special Investigations Group, which opened the agency’s first file on Oswald in October 1959 (a story I tell in my new biography of Angleton, The Ghost).

Of the 224 pages in the O’Neal file released on November 3, 177 pages contain redactions, and three are wholly secret.

3. David Phillips: A decorated undercover officer, Phillips served as chief of Cuba operations in Mexico City in 1963. He supervised the surveillance of the Cuban Consulate in the Mexican capital, which Oswald visited six weeks before JFK was assassinated.

His personnel files containing 602 pages of material were released November 3, but 60 percent of those pages are fully or partially redacted. Only 227 pages are open to the public.

4. Ann Goodpasture: The senior woman in the Mexico City station in 1963, Goodpasture worked closely with Phillips and coordinated the station’s audio and photo surveillance operations during Oswald’s visit to Mexico City in September 1963.

Of 288 pages of material in the Goodpasture file, 95 pages (33 percent) contain some redactions, and 18 pages (6 percent) remain completely secret.

5. George Joannides: A psychological warfare operations officer who worked in Miami and New Orleans, Joannides handled the anti-Castro Cuban Student Directorate, which was funded by the CIA under the code name AMSPELL. Members of the group had a series of confrontations with Oswald in New Orleans in the summer of 1963.

The CIA has released 87 pages of AMSPELL documents, 72 of which are partly redacted. The only material made public was newspaper articles and brochures about the Cuban Student Directorate. None of the documents are dated before 1964.

The CIA told Trump that the JFK files could not be released because disclosure might endanger living CIA agents, an irrelevant objection in the case of these files. Angleton died in 1987, O'Neal died in 1995, Phillips died in 1988, Goodpasture died in 2011, and Joannides died in 1991.

What Have We Learned?

Judge John Tunheim, who oversaw the declassification of 4 million pages of JFK files in the 1990s, called the CIA withholding "disappointing."

"They knew this deadline long ago," Tunheim told Politico’s Bryan Bender. "It should have been done by Oct. 26, 2017."

Dan Hardway, a West Virginia attorney and former investigator for the House Select Committee on Assassinations, notes that the CIA is not in compliance with the JFK Records Act, which requires federal agencies to provide a written explanation for withholding any files past October 26.

On the website of the Assassination Archives and Research Center in Washington, D.C., Hardway writes:

"There has been no explanation, let alone a presidential certification, that the massive redactions in these 'released in full' documents meet any of the mandatory exemptions that allow withholding. No identifiable harm is specified. No rationale is given as to why the secrets protected outweigh the public interest in disclosure. These files are not in compliance with the law no matter what the mainstream media says.”

Like Tunheim and Hardway, I doubt the CIA hiding “smoking gun” proof of a JFK conspiracy in these files. But after studying the JFK assassination for 25 years and James Angleton’s career for three, I believe there is smoking gun proof in the still-secret files about one of the CIA’s most sensitive secrets: that Lee Harvey Oswald was a CIA asset, witting or unwitting, who was used by Angleton and possibly others, for undisclosed intelligence purposes in the years, months and weeks before President Kennedy was gunned down.

Was the CIA’s monitoring and use of Oswald part of a conspiracy to kill the liberal president? There’s no definitive proof of that, but given the extraordinary secrecy still surrounding these records 54 years after the fact, it would be willfully naïve to rule out the possibility. Until all of the JFK files are released, the conspiracy question will be unresolved because of CIA secrecy.