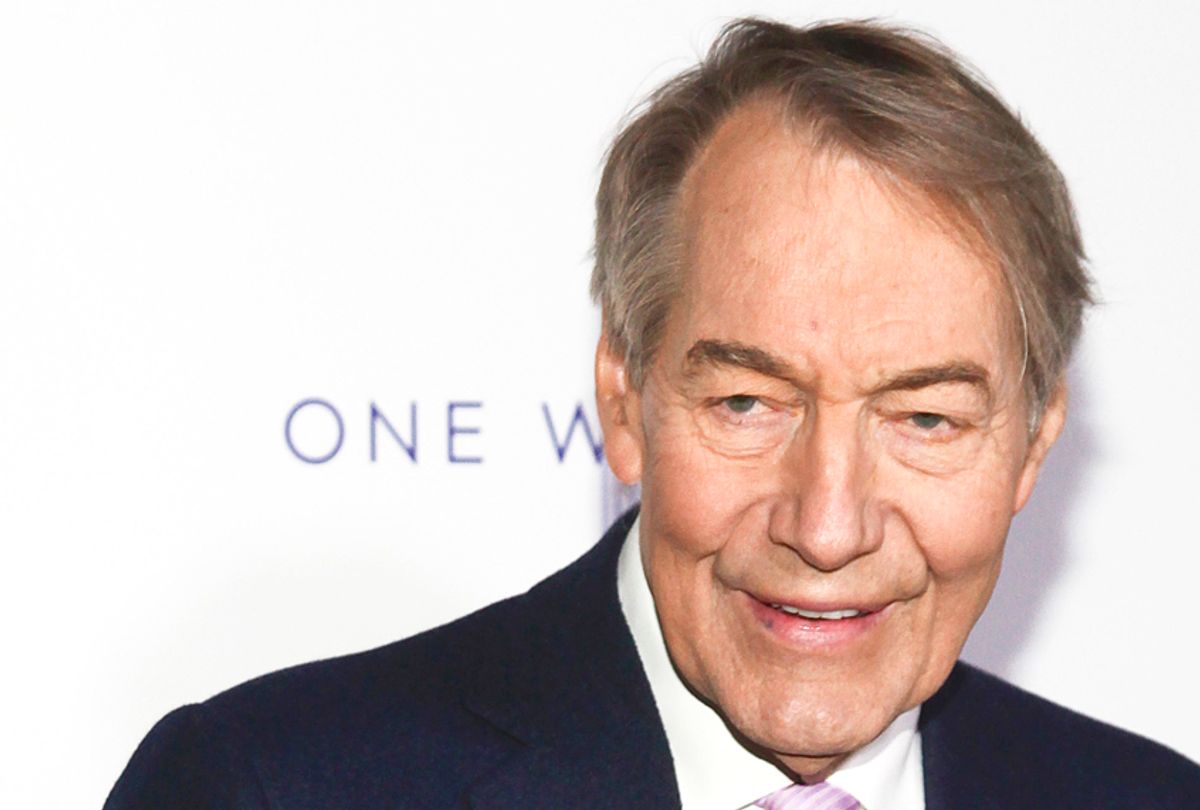 Charlie Rose, longtime PBS host and current co-anchor of CBS' "This Morning," has been accused of sexually harassing eight women, some of them his employees. Following a report published Monday in the Washington Post, CBS, PBS and Bloomberg, where Rose is a contributor, have all suspended the host pending reviews.

In their exposé, reporters Irin Carmon and Amy Brittain detail an alleged pattern of abuse of power and abuse of women going back to at least the 1990s, one that saw job applicants, show staff and personal assistants weather inappropriate propositions, language and touching. One alleged victim claims she was fired for sharing their stories of harassment with another co-worker. Another claims Rose sexually assaulted her at his home.

In all, Brittain and Carmon's report is as damning and disturbing as many others we have seen in recent months following the twined exposés on Harvey Weinstein's alleged history of abuse from the New York Times and The New Yorker. It also speaks to the unearned safety industries provide their leaders, even when their misconduct is an almost-open secret.

Most troublingly, Brittain and Carmon spoke to a woman who claimed that she reached out to Rose about a future in broadcast journalism in 2009. The anonymous woman, who was in her mid-30s at the time, says that she discussed careers with Rose, who would meet her over lunch or furniture shopping. He once put her hand on her knee but then said, "I hope you don’t mind, I’m from the South, we’re touchers,” according to her.

Later, he would hint at a job. “He talked about this position," the alleged victim said, "which he referred to as being his intellectual partner, that I would be the executive producer for global content.” Saying that Rose was offering a salary of $120,000, she claims he invited her to his Bellport, New York house to iron out details over the weekend, claiming she would have a wing of it to herself. After dinner, the victim alleges that she and Rose returned to his house where he changed into "a white bathrobe, which was open; he wore nothing underneath." As Carmon and Brittain report:

“I thought, I’m doomed,” she said. “I was completely panicked. In retrospect, I thought of a million things I could have done.”

She said she was not intoxicated — Rose had drunk his wine and then hers at the restaurant — but said he appeared to be. It was nearly 2 a.m. and she was exhausted, she said. She also said she felt alone and powerless. It was the middle of the night, they were on his secluded property, and she did not know how to drive.

She said he then tried to put a hand down her pants.

“By the time he touched me the first time, he was already very angry,” she said. “I was scared, and I was also kind of frozen.”

After that, her memory is “hazy,” she said. They ended up in his bedroom

The unnamed accuser then claims that she doesn't remember what happened next, except for the fact that she was, "crying the entire time," that he tried again to put her hand down her pants and she only made her escape when he fell asleep. When she would follow up on the job offer days later, "He replied with his regrets."

The woman would later, on a friend's suggestion, package what she says happened between her and Rose into a semi-fictional short story called "The Hunt" (“I was hunting for a job . . . and he was hunting for me,” she told the Post). Carmon and Brittain write that, "She said she submitted the story to several magazine editors in 2010 and 2011. Paris Review editor Lorin Stein declined to publish the story but wrote to her in March 2011, 'It has the ring of truth (alas).'"

This is only the most potentially criminal of the accusations against Rose. Others, some of whom gave their names to the reporters, offer stories of similar grooming, of bursts of outrage, of unwanted embraces and of the touching of the breasts, buttocks and thighs. All of their stories are worth reading fully in Carmon and Brittain's article.

Somewhat unsurprisingly, all the women the two talked to reported being completely intimated by Rose.

“Everybody is terrified of him,” said one of the women. "He creates this environment of constant fear. And then he’ll shine a spotlight on you and make you feel amazing.”

Supposedly, the behavior — which was an open secret in much of the industry — was worst within the small staff of Rose's self-titled talk show. Some of the women talking to the Post claim producer Yvette Vega shrugged off their complaints, something she does not deny. “I should have stood up for them,” she told the Post “I failed. It is crushing. I deeply regret not helping them.”

Rose himself did not deny the accusations in an extensive comment to the Post, though he seemed to blame for his alleged behavior. “In my 45 years in journalism, I have prided myself on being an advocate for the careers of the women with whom I have worked,” Rose said. “Nevertheless, in the past few days, claims have been made about my behavior toward some former female colleagues."

He continued, “It is essential that these women know I hear them and that I deeply apologize for my inappropriate behavior. I am greatly embarrassed. I have behaved insensitively at times, and I accept responsibility for that, though I do not believe that all of these allegations are accurate. I always felt that I was pursuing shared feelings, even though I now realize I was mistaken."

He ends saying, "I have learned a great deal as a result of these events, and I hope others will too. All of us, including me, are coming to a newer and deeper recognition of the pain caused by conduct in the past, and have come to a profound new respect for women and their lives."

It is a non-apology not far from the ones  Louis C.K. and Kevin Spacey offered in connection to their own patterns of alleged misconduct. It's a format we've already seen too often, and one that has saved neither of those mens' careers. The following days will see how it serves Rose.