Trump and sports promoter LaVar Ball are more alike than different, but their Twitter war has a long, ugly history 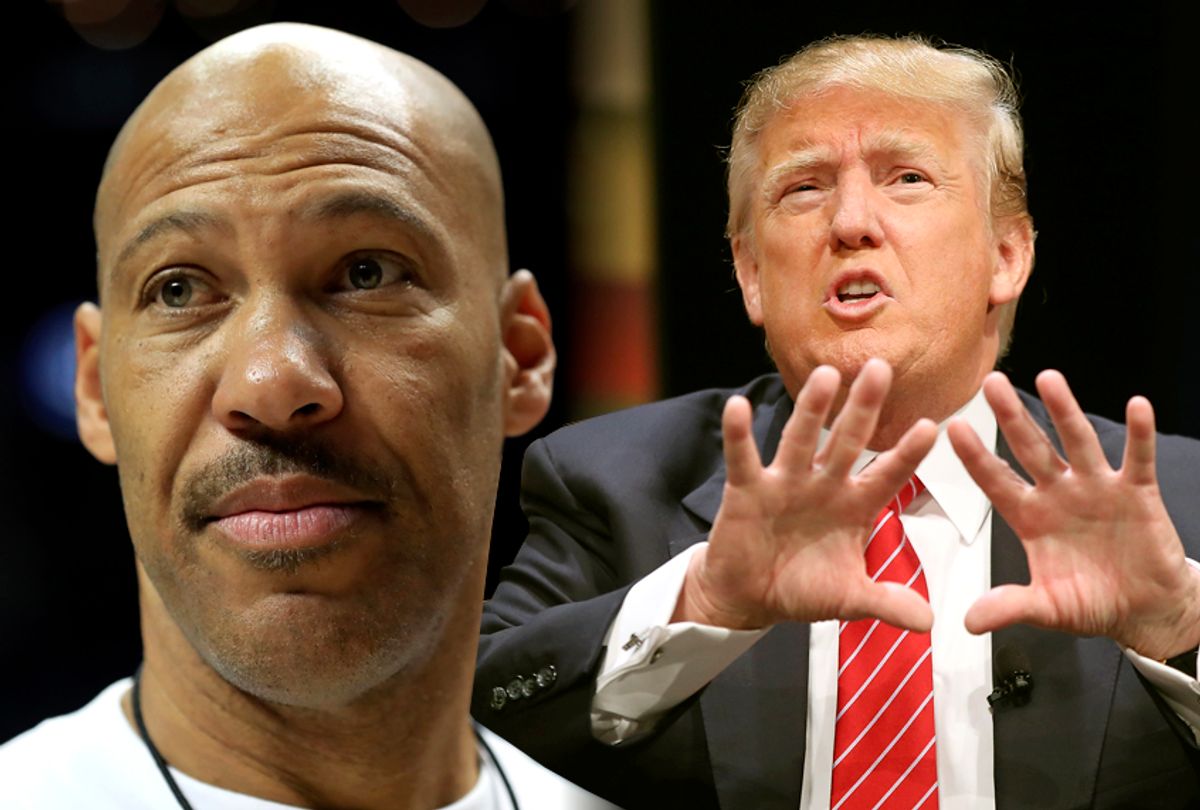 If Mike Judge writes a sequel to his great 2006 film "Idiocracy" (which now feels like a very prescient documentary and not a satire), he could easily cast president Donald Trump and sports promoter-manager LaVar Ball as the main characters. Both men are obnoxious, loud masters of self-promotion who play on the worst parts of American culture in order to make money. Trump is the champion of this debased culture; Ball is no more than a low-ranked challenger. Nevertheless, in many ways their public personas are more similar than different. Together, they are doppelgängers of crudeness. This fact is lost on Donald Trump, a person who lacks the capacity for critical self-reflection.

In his Sunday Twitter outburst, Trump went after Ball this way:

Now that the three basketball players are out of China and saved from years in jail, LaVar Ball, the father of LiAngelo, is unaccepting of what I did for his son and that shoplifting is no big deal. I should have left them in jail!

In another example of how Trump has soiled the White House, this idiotic temper tantrum came on the anniversary of Abraham Lincoln's Gettysburg Address. Alas, the American presidency has fallen from the heights and gravitas of Lincoln's oratory and leadership to the 280 characters of Twitter and a petit-fascist who demands constant praise and attention because his life is modeled on a reality TV show.

Trump's behavior, of course, is part of a much larger pattern.

Trump appears to view himself as a monarch who must be shown acts of loyalty and fealty at all times and by all people. In his mind, he is a Leviathan, the physical embodiment of the State, who must be treated accordingly.

Throughout his presidency Trump has repeatedly targeted black people for harassment when he deems their behavior "uppity" and "disrespectful." This is one more example of how the politics of white rage pay great political dividends in America. This fact was true at the time of the founding and it remains so in the age of Trump.

For many reasons, black American athletes are a special target for white rage. Professional athletes in football, baseball and basketball earn large sums of money. For sports fans -- especially those who are white and right-wing -- this is a source of admiration and idol worship, but also resentment and jealousy.

Professional athletes -- who are disproportionately black, especially in the NFL and the NBA -- are impressive physical specimens, in far better shape than the average fan. Black physicality and the black body have historically been objects of contempt, fear and disgust (as well as desire) for the white gaze.

Writing at the Guardian, Samuel Freedman explores the peculiar transactional nature of this relationship, observing that there is a "morally corrupt contract between white fans and black athletes" that provides some African-American stars with "provisional, symbolic whiteness – in the forms of adulation, affluence, product endorsements, social acceptance. As one notorious example said of himself, 'I’m not black, I’m OJ.' In return, however, the black athlete must surrender his or her political voice as a black person."

Some fans protest that sports should not be politicized, but sports have always been political. That black athletes -- along with some of their white teammates -- would dare to take a knee during the national anthem in protest against racism and social injustice is provocative precisely because it calls into question the false beliefs that too many (white) Americans have about the relationship between democracy and white supremacy.

Trump's attack on LaVar Ball will certainly play well with Trump's supporters in the right-wing media and on sports talk radio, two zones where toxic white masculinity is unrestrained, nurtured and coddled.

Public opinion polls demonstrate this: Trump's war on black athletes has helped to buoy him. One also cannot overlook how Trump's comments about LaVar Ball serve to distract attention, however briefly, from the Russia scandal that threatens his administration.

Even as we document Donald Trump's outrage of the day, we should always ask ourselves what it represents or reveals. Because he is a purveyor of lies in the service of malignant reality, Trump wants the American people -- especially journalists -- to focus on the particulars and not the bigger picture. The latter shows the true dimensions of American fascism and the country's calamity under his regime; the former shows only one minor aspect of how fascism has taken hold in America, thus normalizing it.

Donald Trump was elected in large part thanks to white racism and the deep sense of insecurity and obsolescence which lies at the heart of whiteness in today's America. These anxieties about losing social and political power are especially profound among white men. This drove tens of millions of white voters to support a candidate who was clearly incompetent, a racist, a sexist, a misogynist, a serial liar, a boor and an ignoramus. In effect, they idolize those values and felt on a visceral level that Trump would restore the status of total supremacy they once enjoyed over nonwhites.

When Trump attacks black and brown people on Twitter, he is doing it for the approval of his public. Of course, this makes America look foolish in the eyes of the world, as our prestige is diminished by Trump's behavior. Yet his public cheers him on. White racism and racial resentment are societal intoxicants. America is sick with this disease and too many white Americans do not want to get well. Trump is their drug dealer; they eagerly roll up their sleeves so he can inject poison directly into their collective bloodstream.