DeWanda Wise talks truth, trauma and what it’s like to play the sex-positive woman that made Spike Lee famous 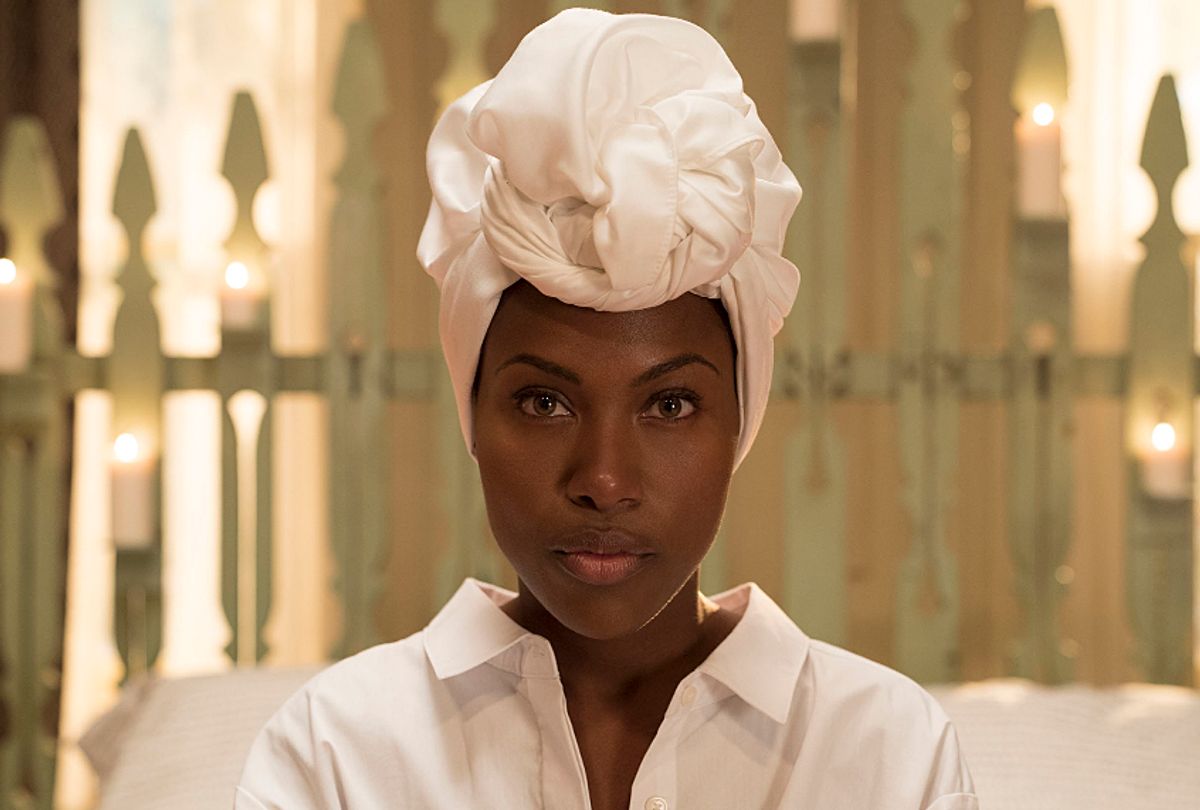 DeWanda Wise in "She's Gotta Have It" (Netflix/David Lee)
--

“She’s Gotta Have It,” Spike Lee’s revival of his 1986 film, premiering on Netflix on Thanksgiving, opens, aptly enough, with a shot of a bed. The covers stir and Nola Darling, played with both acuity and grace by the stunning DeWanda Wise, rises and speaks, confessional-style, to the camera. “I would like you to know the only reason I’m doing this is folks think they know me. They think they know what I’m about and the truth is they don’t know me.” In the wake of the Weinstein accusations and the #metoo movement that followed, there’s something about this statement that is at once relevant and liberating, especially emanating from the lips of an iconic character who not only expresses and pleasures herself on her own terms but also turns her gaze and her desires onto multiple male partners. Unlike other female characters who are punished for their sexuality — Alex Forest in “Fatal Attraction” or Violetta in “La Traviata” — Nola exists beyond classification.

A Baltimore native whose work in “Underground” and in “Shots Fired,” demonstrated both tremendous range and depth, Wise brings a quiet restraint to all her roles, yet that effect is more Pinter’s metaphorical “weasel under the cocktail cabinet” than simple detachment. On screen she seems both a free spirit and an old soul.

“I’ve always been very indie-spirited,” Wise tells me over the phone. Talking to her is like talking to your funny, on-point friend who is reminding you to be a better version of yourself. “That’s why my roles are more character-based. In 2010 I said I would like to be a cinematic Rihanna.” She pauses while we both let that statement sink in. She’s also the kind of person who can say she wants to be Rihanna. “I was working on an indie “How to Tell You’re a Douchebag.” I was playing Rochelle, a feminist, radical blogger living in Brooklyn. After “Douchebag” went to Sundance, I got the role in “Shots Fired.” Then “Underground,” which was a dream come true. All three of these phenomenal characters represent different facets of personhood. Then there’s Nola . . . ”

Of course, there’s no comparing any of these amazing characters. Yet as women gaze at long last into the terrarium of putrefying masculinity, there’s something so apt and fantastic about the timely arrival of 2017’s redux of Nola Darling, the “sex-positive, polyamorous pansexual” artist. The question is, are viewers ready for this reversal? As Louis C.K. slinks off into the nether distance never to wank again and Jeffrey Tambor and Kevin Spacey’s characters are written off the shows that revolved around their masculine blah-blah-blah, is it at long last time for a woman to own that space? Not to mention a woman of color? Only, why exhume a character bell hooks excoriated so long ago?

“The process was hugely collaborative,” Wise assures me. “Spike has really learned from his past. There needs to be a space for a black woman to be a full person and not just a fine, upstanding person in the community, that space is already on lock. We’re called strong, black women and then we romanticize it and it’s toxic. It’s also exhausting AF.”

On one level, Nola defies the stereotypes normally associated with a woman who has multiple partners — i.e. the man-eating ho who must die. In some sort of liberated Upside Down, Nola’s lovers cleave to type the way female characters usually do in similarly male-driven films: the hot model Greer (Cleo Anthony), the uptight investment banker Jamie (Lyriq Bent) and the comic sneakerhead Mars Blackmon (“Hamilton’s” Anthony Ramos). Intermittently, Nola communes with her female friends in gentrified Fort Greene Brooklyn, shot as though it too is yet a fourth lover.

Rather than seeking a dyad with the president (i.e. Olivia Pope) or running Grey Sloan Memorial Hospital, Nola instead yearns for artistic and sexual freedom even as she achieves what could be true connection with all three of her male counterparts, depending, that is, on how open-minded you are in your definition of true connection. When she has drinks with her friends for her birthday, they talk about work rather than guys. She lives alone and is self-supporting. Her life serves as inspiration for her art, even the difficult/harrowing situations.

That the men ultimately become objects in a Spike Lee joint may be a bit of a shocker, considering the original film version of “She’s Gotta Have It” starring Tracy Camilla Johns was criticized for its rape scene (Lee has been called out for his “woman problem”) but auteur, and his creation, have apparently evolved with age. We shall see. For this version, the writers room contained four women (including excellent playwright Lynn Nottage) plus the series has a female showrunner.

Indeed, if we have learned only one thing from social media, it is that to exist as a woman IRL is to bear the burden of the male gaze and the male gaze is pervier and grosser than we ever imagined which is saying something. In film and TV — by which I mean actual scripts rather than the big, bad, barfy business — this is a double burden. Of course “She’s Gotta Have It” was shot and edited before the Weinstein revelation, yet I would argue that said “revelation” wasn’t so much of a revelation as much as a puff of stinky breath that lifted the dystopian power curtain on an issue everyone knew about and knows about in every field and instance on earth. For the most part, the female and the female character is either an attractive object to be attained by marriage (or force) or a castrating bitch to be avoided at all costs or even a standup comic to be masturbated on in a hotel room. In the rare instances she also happens to be a person of color, this burden possibly triples. The question is how to reify the burden but also challenge preconceived notions of what black and white female bodies are allowed to do and say while still making entertaining television that both genders somehow want to binge-watch.

In the best of circumstances, the experience of watching most television shows and movies as a sentient female being, involves a certain amount of contortionism. For women of color, I’d imagine, this pretzeling increases exponentially. The idea is that as women watching white-guys-doing-stuff shows like “Breaking Bad,” or “Ray Donovan” or “Game of Thrones,” all shows I happen to love, is that we constantly have to contort ourselves to participate in the experience. When female-driven shows finally pop up — such as “Big Little Lies” or “Handmaids Tale” — we glom on to the characters and cling for dear life. Yet, save Zoë Kravitz or Samira Wiley, these are predominantly white shows with white casts for for white women.

“Hollywood was built on women,” Wise reminds me. “Of course we mostly see the stories of white women but this is changing. I’m not negating those stories either. I’m adding to them.  It’s just a lot of my work,he work I do as a black woman, deals with living in the aftermath of trauma. I’m invested in making sure we process how we deal with grief and what it means to be a hashtag or a headline or to have loved someone who’s a hashtag or a headline or in Nola’s case, how we retain joy in the midst of Life with a capital LIFE.” She sighs and then laughs and then says, “Ultimately it’s hard for me to gravitate towards characters who haven’t been through some shit.”

The question that the two versions of “She’s Gotta Have it” and the two Nolas (and even the two Brooklyns), ask in tandem is both rhetorical and disconcerting. Have things changed in 30 plus years? What is this “it” that Nola’s gotta have? Justice? Equality? Love? Or simply freedom to walk down the street un-harassed? At the end of the first episode, after a near assault gives rise to activism and art and art-as-activism, Nola sits in kundalini white, in front of an enormous self portrait. She speaks directly into the camera, pointing with her paintbrush as she spells out the hashtag printed across the screen: #blacklivesmatter. Only Nola isn’t talking to herself and Wise isn’t either. Both are talking, unapologetically, unwaveringly, to us.