Here's hoping the recent controversy over her victim shaming will make Dunham step back. Knowing her, it won't 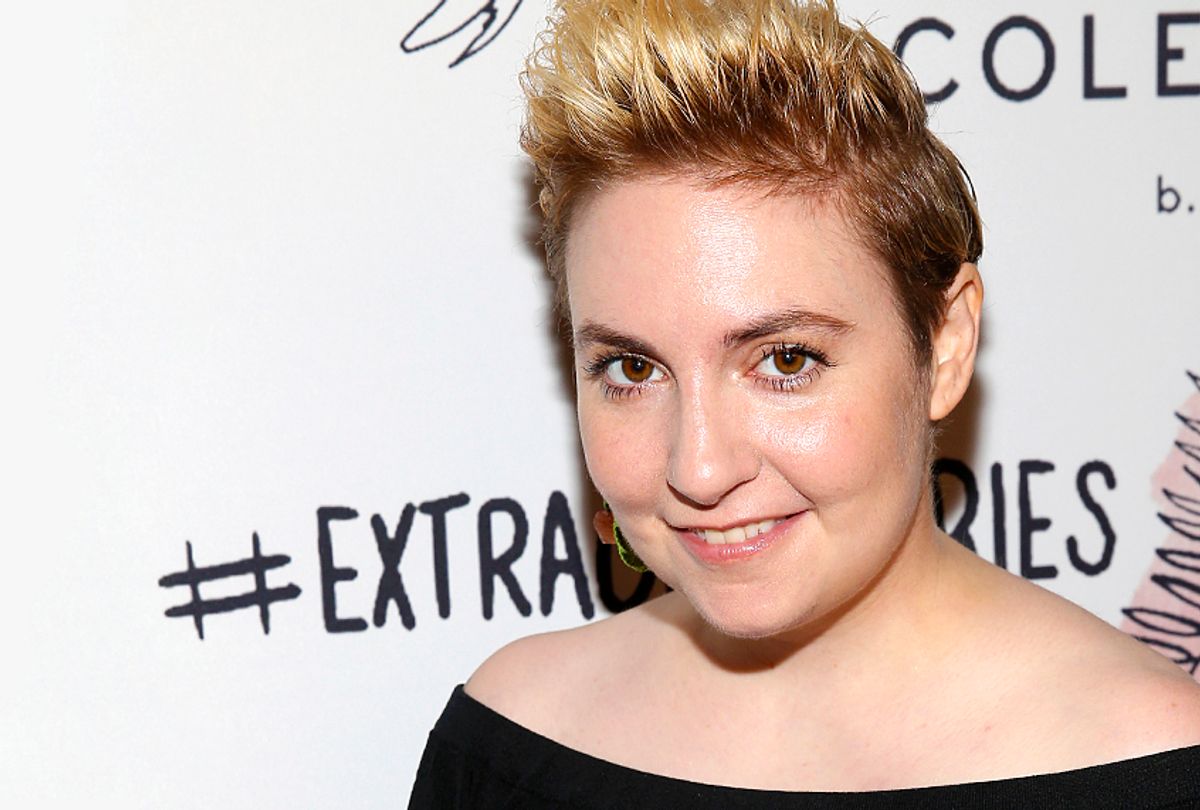 Clemmons decided to leave the publication after Dunham released a statement Friday saying that allegations by actor Aurora Perrineau, who claims that "Girls" writer Murray Miller sexually assaulted her when she was 17, belonged to "the 3 percent of assault cases that are misreported every year." Essentially, Dunham accused Perrineau of lying.

Dunham and "Girls" showrunner Jenni Konner said in their joint statement, "During every time of change there are also incidences of the culture, in its enthusiasm and zeal, taking down the wrong targets. We believe, having worked closely with him for more than half a decade, that this is the case with Murray Miller . . .  We stand by Murray."

It's a bizarre, so-far baseless assertion that contradicts other statements Dunham has made about sexual assault. This one, in particular, stands in stark contrast to the comments above.

Dunham has since apologized for her Friday statement, but did not apologize to Perrineau. "I now understand that it was absolutely the wrong time to come forward with such a statement and I am so sorry," she wrote on Twitter. To Dunham, the problem was timing, not calling a possible survivor coming forth with a potentially credible accusation a liar based on the good working relationship Dunham had with the accused.

For Clemmons, it was enough. "It is time for women of color--black women in particular--to divest from Lena Dunham," Clemmons declared on Twitter.

My statement on why I will no longer write for @lennyletter, and the behavior I witnessed firsthand from @lenadunham's friends. It is time for women of color--black women in particular--to divest from Lena Dunham. pic.twitter.com/dxOWCLhTpA — zinziclemmons (@zinziclemmons) November 19, 2017

"For all you writers who are outraged about what she did, I encourage you to do the same. Especially women of color. She cannot have our words if she cannot respect us," Clemmons wrote.

She then described having mutual acquaintances with Dunham, who were "like Lena--wealthy, with parents who are influential in the art world," she said. "They had a lot of power and seemed to get off on simultaneously wielding it and denying it."

Clemmons added that she "avoided those people like the plague because of their well-known racism. I'd call their strain 'hipster racism,' which typically uses sarcasm as a cover, and in the end, it looks like gaslighting."

She claims she recounted these experiences as a way of saying that she has long known who Dunham was, but Clemmons' relationship with her colleagues and her editors at Lenny Letter kept her there until now.

Clemmons is not alone in seeing Dunham's shaming of Perrineau as the last straw. After all, she has a long history of saying insensitive, offensive things and then half-heartedly apologizing for it.

i never want to see any publication hail lena dunham as a feminist icon ever again https://t.co/F89YvP7BHM

For the women — particularly the women of color — who have been holding Dunham accountable for years, this weekend's comments were just further confirmation of what they've already believed about her.

It is hard to imagine a better avatar for white liberal capitalist feminism than Dunham. Truly this is *kisses fingers* spot on for that brand. https://t.co/O8Z1hI18zn

Lena has been schooled SO many times-especially on what it means to stand w black women. And time and time again, she chooses not to.

why Lena Dunham has always been trash: an abbreviated list pic.twitter.com/PjD2B7a47k

Surely, they have reason.

Dunham's behavior this weekend is disappointing, but far from surprising. In comments made and actions taken over her first five years in the spotlight, Dunham has seemingly embraced a brand of feminism for women who look like her only. Hers is, quite often, a white feminism. Though she'd claim to the grave otherwise, she's left plenty of receipts along the way.

While missteps are a given for young women developing in the spotlight (particularly if you're wealthy and white), Dunham has made no effort to take up less space, to pass the microphone or to, at the very least, listen to and grow from any of the legitimate criticism she's received.

Over the years, she's offered support for the pro-choice movement by saying she wished she had experienced an abortion, something that is unnecessary and in fact undermines some of the very necessary arguments for reproductive rights. Elsewhere, she's compared Bill Cosby crimes to the Holocaust and attempted to shame Odell Beckham Jr. for being apparently uninterested in sleeping with her (yes, this really happened). Both of those cases had strong racial undercurrents.

Whenever she runs into a firestorm for such comments, Dunham usually offers an apology or retraction that's often as tone-deaf as the original remark. Despite her claims of being a liberal, of being genuinely concerned about the welfare of others, she can't even say "I'm sorry" without centering herself and her feelings, usually to the exclusion of the serious issues involved.

As she wrote in her non-apology apology for protecting a man accused of sexual assault by a woman of color, "I naively believed it was important to share my perspective." Indeed.

Shortly after the statement went live, Dunham tweeted, "I believe in a lot of things but the first tenet of my politics is to hold up the people who have held me up, who have filled my world with love." Again, it was an instance of conflating her own personal concerns with progressive causes and actions.

In truth, the "first tenet" of Dunham's politics is her fervent belief that her voice always needs to be heard, that her perspective always matters. It's a belief that only a person with enormous privilege would ever hold, let alone act on. And act on it she does, be it by not putting her money where her mouth is in cases of sexual assault or gaslighting her dog.

Really, Lena Dunham needs to just stop talking altogether. Though, knowing the invincibility of white womanhood and Dunham's penchant to center herself, that will never happen.