A Haitian disaster in the making: Donald Trump ends the era of American goodwill

Tens of thousands of Haitian refugees are being told to leave. Here's why that may be a problem in three years 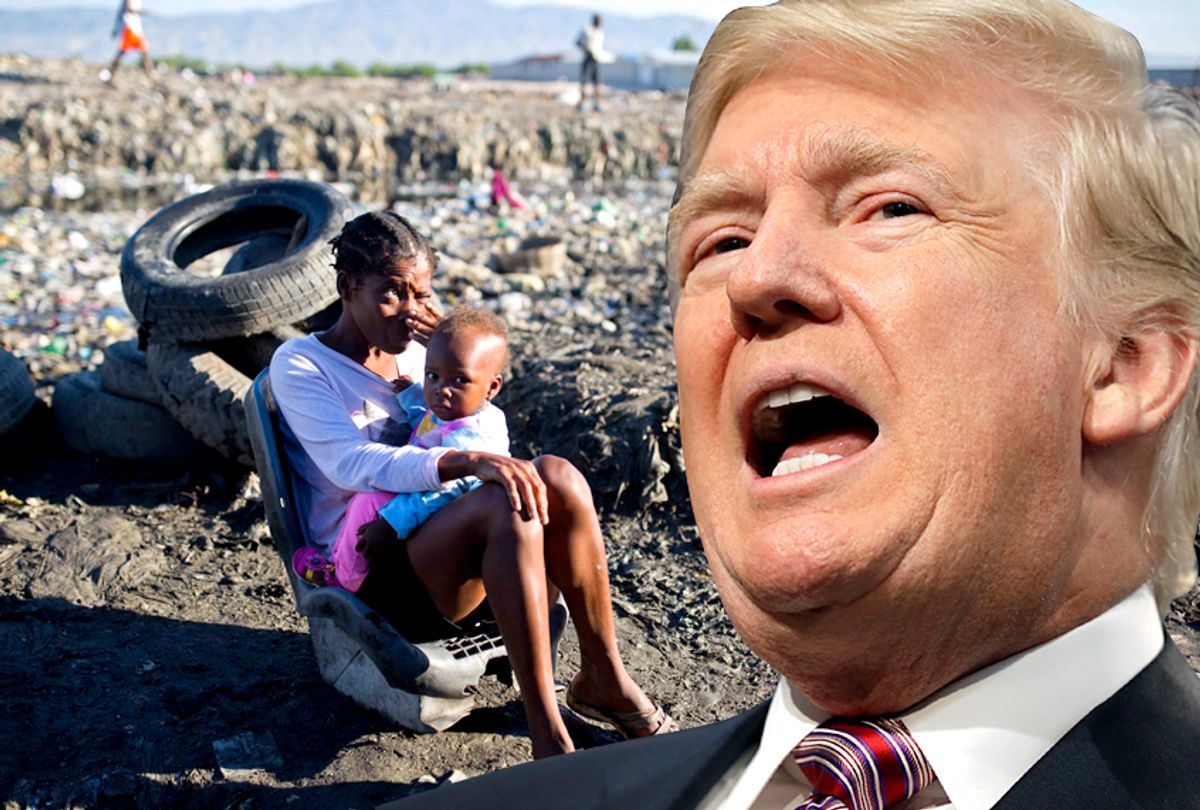 President Donald Trump issued two presidential pardons on Tuesday, and to the nation's great relief they didn't go to anyone named Manafort or Flynn. They were for a couple of other turkeys — named Drumstick and Wishbone — and in his usual classy fashion he joked that he loved to rescind his predecessor's orders and had looked into withdrawing the pardons for last year's turkeys but was told he couldn't do it. He seemed quite pleased with himself.

Unfortunately, there are millions of Americans not feeling quite so happy this Thanksgiving. The Trump administration dropped a lovely bombshell this week on the 58,000 Haitians who came to America after the catastrophic earthquake in 2010 as part of the temporary permit program and basically told them to leave.

Recall that these Haitians were displaced by a massive earthquake in 2010 that killed more than 100,000 people and destroyed an estimated 250,000 residences and 30,000 commercial buildings.There were so many bodies they had to be buried in mass graves. Nearly all infrastructure — including communications, airports, roads and power lines — were destroyed. Cholera broke out and killed more than 8,000 people. In other words, the country was decimated.

The disaster was so monumental that help and pledges came in from all over the world. But the task has been overwhelming and corruption has been rife, particularly in one egregious case involving the American Red Cross, which NPR and Pro Publica reported in 2015 had mismanaged $500 million dollars that had been donated for disaster relief and rebuilding of the country with very little to show for it. Seven years later, the country has barely begun to fully recover, at least partly due to the fact that much of the help they were promised never materialized.

Haiti is one of the most impoverished countries in the world and the poorest in the Americas. It has a population of 11 million and the average life expectancy is only 50 years. According to the World Bank, "more than 6 million out of 10.4 million (59 percent) Haitians live under the national poverty line of $2.41 per day and over 2.5 million (24 percent) live under the national extreme poverty line of $1.23 per day." It is not exactly the land of opportunity.

Nonetheless, the Trump administration has decided that, despite the fact that many of these people have American children and are working and contributing to the country, they have to go back. They are determined to deport as many people as possible, regardless of their circumstances, what they are facing in their home countries and how much they have enriched our communities. For now this seems to be the final word for these Haitians, but Democratic Sens. Ben Cardin, Chris Van Hollen and Dianne Feinstein have proposed legislation to protect undocumented immigrants living under temporary protected status in the future by allowing them to apply for permanent legal status after three years. It's unlikely this will ever pass with the immigrant-hating Trump in the White House, but it could happen if the Democrats take control in 2020.

And that could happen as a direct result of such harsh and cruel policies. Right now, Puerto Rico is still in the midst of a catastrophe not all that different from what happened in Haiti in 2010. It has not faced the massive loss of life because there was warning of the hurricane and people were able to prepare. But the broken infrastructure and loss of basic necessities in the disaster's wake is also devastating. And in this case, the island is an American territory which could have expected the kind of professional, efficient disaster relief that any American state would receive.

We know that didn't happen in the immediate aftermath. The response to Hurricane Maria was a disgrace, and if the administration wasn't plagued with scandals, gaffes, investigations, palace intrigue and non-stop misconduct and incompetence, the president's reaction to the disaster and his behavior when he went to visit would have been the low point. We've already seen one glaring example of corruption with the rewarding of a very expensive contract to restore power to an inexperienced friend of Trump's interior secretary Ryan Zinke. (The project is a mess.) That's just one of many shocking examples of Trump's malfeasance, almost forgotten now in the avalanche of news that's happened since.

However, Puerto Rico is still in serious crisis. The unofficial death toll, as gathered by CNN, is around 500 people. The LA Times reports that economist Tony Villamil, an expert on Puerto Rico, believes that it “going to take a decade at minimum for the island to recover and regain some sense of normalcy. The ports, the power grid, the highways all need to be rebuilt with significant improvements. There needs to be a strong public-private sector relationship that is developed to help in these efforts.”

To date, Congress has approved $5 billion in aid for Puerto Rico. Governor Ricardo Rossello has requested nearly $94 billion more. The chances of that happening with this GOP congress are remote, to say the least. Their priority is placating their wealthy benefactors with gigantic tax cuts.

The people of Puerto Rico are Americans, and like every other American, they can move wherever they want. And that is exactly what they are doing. The government's poor response has people leaving the island at a rate of 2,000 people a day. According to the New York Times, 168,000 Puerto Ricans have migrated to Florida since the hurricane, and many more are expected to migrate in the future. And since they know very well that the island is being neglected and it's presumed it will take years to repair, they are putting down roots on the mainland.

Unlike the Haitians and Nicaraguans who are in the U.S. on a temporary permit, they can stay. They can go to school, work and start businesses. They can also remember who it was that threw paper towels when he came to the island for a photo op and then never bothered to talk about the crisis again.

And they can do something else once they take up residency on the mainland: vote.

President Trump is in Florida for Thanksgiving. At some point during his sumptuous feast, perhaps the fact that he only won the state by 1.2 percent in the last election will come up in the conversation and maybe someone will mention that next time the state will be filled with new voters whose lives were upended by hurricane Maria. He will ask how long before they can be deported back to the island, and someone will tell him that they can stay as long as they like. It might just ruin his holiday.