"Planes, Trains and Automobiles" does for Thanksgiving movies what "Die Hard" did for Christmas 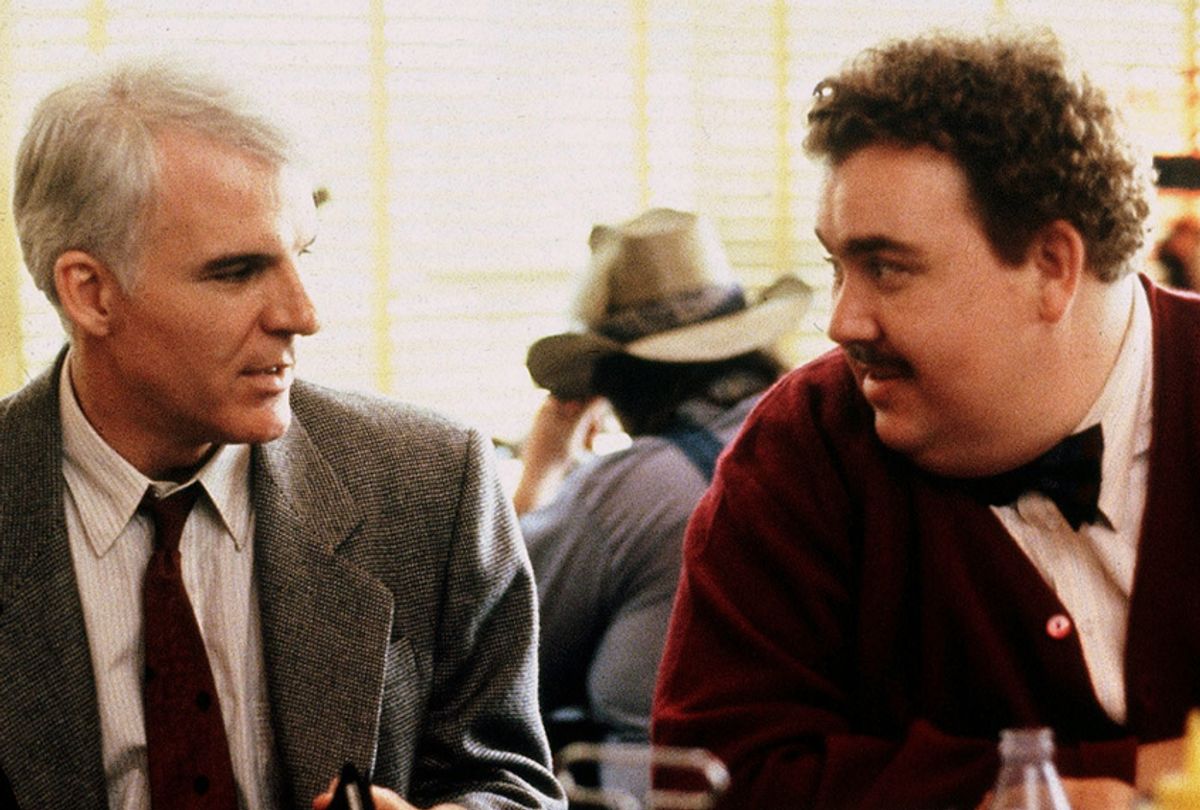 "Planes, Trains and Automobiles" is the best Thanksgiving movie of all time. That's a thigh bone rather than full bird of a statement, as the film, which turns 30 on Saturday, has been making "Best Thanksgiving Movies" lists pretty much its entire life. But in looking at its listmates and what we usually mean when a movie becomes part of an annual holiday celebration, "Planes" isn't sitting at the same table — it's rebuilding it in the garage. Instead of playing the holiday's rituals for drama or laughs or riffing on the spirit we think the occasion embodies, "Planes" tells a deceptively simple story that re-imagines the meaning of the holiday that surrounds it. "Planes, Trains and Automobiles" does for Thanksgiving movies what "Trading Places" and later, "Die Hard," would for Christmas movies, if "Trading Places" and "Die Hard" resulted in late December becoming the time of year to corner the market on frozen orange juice futures or rescue hostages from a seized office tower.

"Planes, Trains and Automobiles" departs with a story choice so obvious that it feels like a master class — two great comedians with great chemistry in a situation that plays to their inherent gifts — instead of a revelation. It stars Steve Martin and John Candy playing themselves trying to get home from New York City to Thanksgiving dinner in Chicago. Everything that can go wrong does. Neal Page (Martin) is an uptight advertising executive whose relentless business travel has become a way for him to interact mainly with strangers rather than live with any real intimacy. ("Spending time with him is like being alone," said Tom Smothers, an early comedic mentor of Martin in real life.) Del Griffith (Candy) is a salesmen who does the same, in part to turn strangers into friends, but as a way of running from a longstanding hurt at home. ("All he wanted to do was make people laugh, but sometimes he tried too hard, and he hated himself for doing that," wrote Roger Ebert of the real-life Candy.)

The two meet on Fifth Avenue, trying to get to the airport when Del steals Neal's cab by accident. They end up stuck together on a two-day odyssey of bad luck, learning from one another thanks to blizzards, faulty commuter rails, rental car mishaps and pretty much any travel misfortune and indignity you can imagine, circa the early winter of 1987. All praise due to the screenplay by John Hughes (who also directed) that "Planes" still largely holds up in present travel conditions of finding a last minute Airbnb when stranded or Uber-ing your way out of delays. When six feet of snow drops in as many hours, stuck feels like stuck no matter where or when you are.

The condition of being stuck far from the comforts of home is a perfect catalyst for the styles of both comedians. Martin is all loose-limbed exasperation as bad luck keeps shoving him into soggy beds and scalding motel showers he can't buy his way out of. Candy's oversized frame and mismatched multi-layered outfits betrays a man at home with the anonymity of airport gates and train depots but uneasy sitting still with real conversation. Like his sweaters, his jokes are loud and overly-friendly. Initially it makes "Planes" an effortless comedy with its most quotable moments — Martin giving a perky rental car agent (Edie McClurg) a monologue of f-bombs, Candy offering to make up for stealing Martin's car via a list of airport sundries — coming from its two stars slam dunking what they already do best.

Hughes's plainspoken, naturalistic dialogue helps without prodding them along. "Planes" feels different than his two biggest movies up to this point — "The Breakfast Club" and "Ferris Bueller's Day Off" — which seem written to produce at least one quotable zinger per scene. All three films are about ordinary people on extraordinary days of their lives and often, extraordinary times of year, favorite themes of the late filmmaker. This was a somewhat personal film — Hughes wrote "Planes" to celebrate his young family moving back to his beloved Chicagoland area after four years in Los Angeles. He had two of the greatest living humorists as his leads. Call it artistic maturation ("Planes" was the first film he directed about adults and family rather than teenagers) or simple good luck, but "Planes, Trains and Automobiles" is so front-loaded with fortunate circumstances  — two superstar comedians playing themselves trying to get home to the city that the director called both inspiration and home on the week all of America wants to go home to places they love — that Hughes could have steered right into what he had and called it day.

And we would have a nice Thanksgiving movie, maybe even a listmate of the "Planes" we ended up with, but not the best living example of the genre. Because wrapped around this perfectly workable Thanksgiving road trip comedy is its adversary: a setting cold and vast instead of cozy and intimate, centered on the personal drama of strangers instead of family members with each other, a road trip story with Thanksgiving dinner as the destination that never quite gets there. (I'm spoiling nothing by saying that the Thanksgiving dinner Martin and Candy ultimately come home to happens off screen after the movie is over).

If the road trip is among our most American movie format genres, "Planes, Trains and Automobiles" allows itself almost none of its gifts: the road here doesn't lead to freedom but vulnerability, Del and Neal don't chose the journey but it instead holds them captive. If Thanksgiving is among not only our most American holidays but also our most deliberate — the whole country travels to a designated place for a traditional meal at a designated time — "Planes, Trains and Automobiles" is rather a story about chance, about a friendship born when two people hiding inside their skin are brought out of it by being stranded with one another.

We see these two movies becoming one in its best known scene. Martin yells at Candy for being a slobby motormouth with the social skills of a talking Chatty Cathy Doll, then mimics pulling a string on his chest. It's vintage Steve Martin, hilarious except Hughes keeps his camera on Candy whose face goes from indignant to wounded to painfully real in seconds. And when he speaks to defend himself  — "You're right. I talk too much. I also listen too much. I could be a cold-hearted cynic like you. But I don't like to hurt people's feelings" — Hughes reverse shots to Martin's face in closeup, eyes closed, head tilted down in humiliation. He's been a jerk to the one person who actually cares about him getting home as much as he does and is in a position to actually do something about it.

If Thanksgiving is a celebration of family, bounty and gratitude for what we have, its shadow is a painful recognition of what we don't and how we have been complicit in keeping it away. In "Planes, Trains and Automobiles," the holiday of gratitude doesn't make Neal and Del thankful but humble and self-aware. Family in this movie is just not the finish line but a reminder of how the two men have fallen short and contributed to their own unhappiness. It's happy ending comes only after a terribly sad moment when Neal realizes what Del has actually been coming home to, Del admits why he wasn't truthful with Neal about it and Neal realized that this honesty and vulnerability is exactly what his own life lacks. Their joint homecoming is discovering what they've been missing is what the other is at his core.

What makes for a great holiday movies? Does it embody its rituals ("National Lampoon's Christmas Vacation"), its spirit ("It's a Wonderful Life," which was released in January of 1947 and became a yuletide classic a full 30 years after that) or strike the holiday against its theme like a tuning fork? (If there's a greatest ever Labor Day weekend movie, "Stand By Me," about the hard realities of growing up and losing childhood friends, is it.) In the case of "Planes, Trains and Automobiles," it's taking what Thanksgiving and therefore movies about it are — cinema, as a populist art, is rarely in a position to present a holiday as anything other than our conventional readings of it, which is why movies set on New Year's Eve will never lack champagne and countdowns and the characters saying "next year will be different" — and using it as a counter to tough, firm questions. What if warmth, home and togetherness are a reminder of the very things we have kept from ourselves?

Even though the majority of beloved Thanksgiving movies concern themselves with meal prep before ("Pieces of April"), family drama during ("Home for the Holidays," "House of Yes") or dealing with old hurts after ("The Big Chill," "Hannah and Her Sisters"), and even if a road trip with turkey dinner as destination instead of centerpiece isn't unique to "Planes" ("Scent of a Women" would go there in 1992) or even its director (the Hughes-scripted "Dutch" in 1991), all Thanksgiving movies are, in the end, about coming home. It's the least varied of the holiday genre categories, if we recognize that films now considered "Christmas Movies" can just happen to take place around Dec. 25 ("Die Hard"), Fourth of July movies are always about freedom and America, but that encompasses a whole lot (Imagine "Mr Smith Goes to Washington" and "Independence Day" on the same best-of list, because it happens all the time) and Garry Marshall's late-in-life holiday trilogy ("Valentine's Day," "Mother's Day" and "New Year's Eve") were a release-date gimmick more than anything else.

"Planes, Trains and Automobiles" is the modest, brilliant exception that proves the rule: In the story of Neil Page and Del Griffith, on its face a very funny, silly comedy about the mishaps of trying to get home to Thanksgiving dinner during a blizzard, we actually get a story that reframes the ritual of Thanksgiving itself as a homecoming, not to one's family but one's self, to the idea that in order to be thankful for what we have, we have to first be open to letting people be thankful for what they see in us.