Sadly, times have gotten so bad that even a movie that cast Peter Coyote as POTUS has lessons to teach us about war 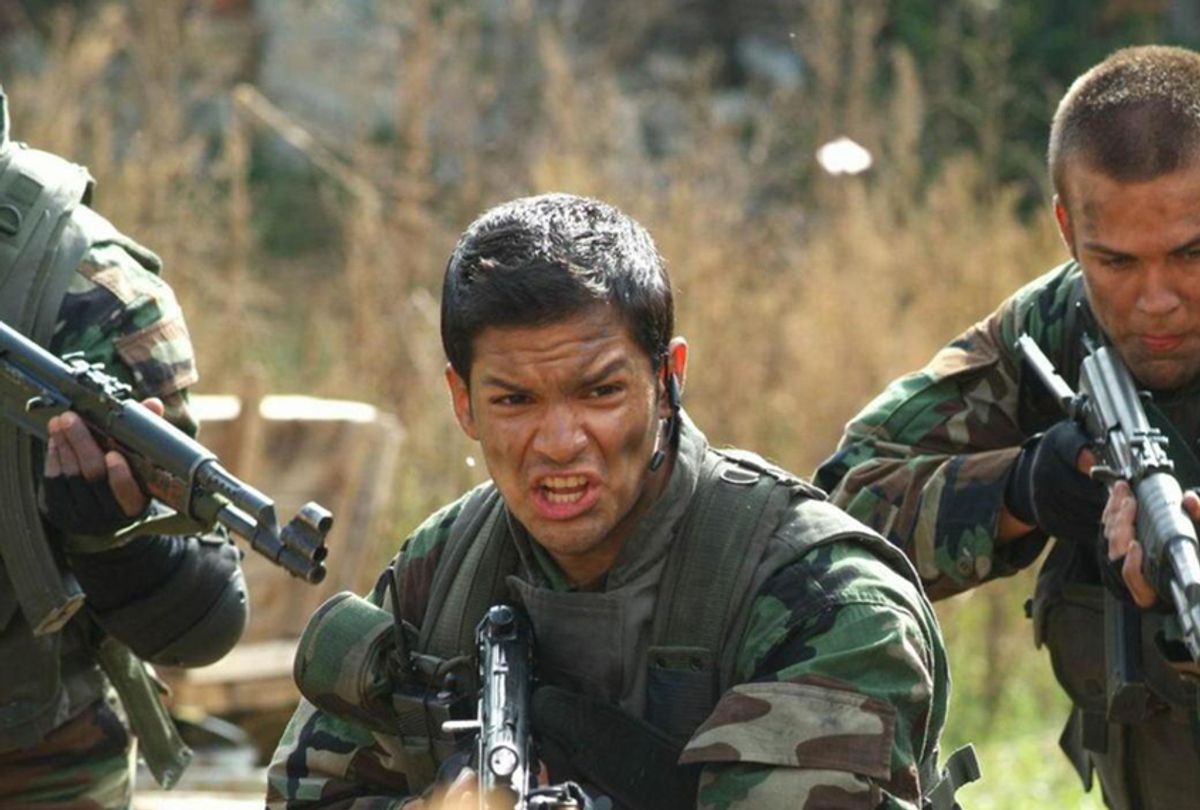 A lot of pretentious movies open with a solemn quote against a black screen. "Behind Enemy Lines 2: Axis of Evil" may not be any great shakes by action genre standards, but its quote is a doozy if you've been paying attention to world events in 2017.

"Wars can be prevented just as surely as they can be provoked . . . and we who fail to prevent them, must share the guilt for the dead."

Just to be clear: BEL2, as I'm going to refer to it, wasn't released as a commentary on President Donald Trump's policy toward North Korea. It was sent directly to DVD in 2006, a cheesy and overwrought follow up to the equally cheesy and overwrought (but higher budget) 2000 theatrical film starring Owen Wilson, although its plot has nothing to do with that one.

Yet while I can't quite recommend it as a so-bad-it's-good classic like "The Room" or "Leprechaun 4: In Space," I also wouldn't dismiss it quite as harshly as the film critic Mike Jeavons did in his review (which inspired this article). "Behind Enemy Lines 2" definitely has a place in any conversation about pop culture ephemera that remain eerily relevant years after they were made.

And yes, I watched a lot of North Korea-themed Hollywood films for this article.

The movie opens by reviewing the Korean War and the 1994 missile crisis, with just enough detail to catch up viewers on how the threat of nuclear war began to emerge between the United States and North Korea (it also, most likely unintentionally, makes former President Jimmy Carter look waaaay better than both Bill Clinton and Donald Trump). The premise is that North Korea begins developing missiles that could bring nuclear weapons to the continental United States, prompting a Cuban Missile Crisis-esque situation in the mid-2000s. This results in a geopolitical crisis that threatens to lead to World War III or even the end of civilization altogether.

So yeah, pretty close to where we are now.

BEL2's description of the Kim dynasty as a "surreal blend of Stalinism, communism and cult of personality dictatorship" was well taken. Less tasteful was the attempt to tie its plot into the mysterious Ryanggang mushroom cloud from 2004. Then again, a movie that drops a homophobic slur and includes dialogue and imagery that shamelessly strokes the fragile pride of American jingoists obviously isn't particularly concerned about political correctness. This makes it all the more remarkable that BEL2 managed to offer surprisingly insightful commentary about Trump.

The most striking takeaway is how BEL2's President Adair Manning, played by Peter Coyote, acts more like a real and responsible president than the cartoon in the White House. He doesn't insult the Kim dynasty — the inevitable chuckle about Kim Jong-il's height is done in the Oval Office, not in front of the whole world. When a South Korean ambassador chides him for abusing their diplomatic relationship, he accepts the criticism because it is valid. Manning also listens to a wide range of perspectives from ideologically diverse advisers and thoughtfully contemplates each of them before cautiously choosing the best option.

These are small things that we can no longer take for granted in the Age of Trump. What if Trump isn't getting involved in a war of words with the Kim dynasty as part of some "Madman Theory" of foreign policy, but does so because he is genuinely unfit for office? What if the real North Korean crisis in 2017 doesn't affirm our faith in democratic institutions, but exposes their weaknesses?

Think about how, in BEL2, the president's top military adviser works behind the scenes to make sure the president won't go soft on North Korea. He is a hawk whose overly-militant attitude is the chief threat to global security. In real life, however, the rumored undercutting of our president's power by Defense Secretary Jim "Mad Dog" Mattis — a man who embodies the military as much as anyone — has been to avoid an unnecessary war, not cause one. Sure, it's hard to argue against any development that prevents nuclear war (assuming the Mattis rumors are true), but what does it say about democracy that such a maneuver is necessary?

It means, if nothing else, that the fictional voters in a formulaic action movie had better common sense than the 63 million who voted for Trump only ten years after the movie was made.

None of the other recent North Korean movies are near as prescient as BEL2. The "Red Dawn" remake simply used that country as a substitute for the Soviet Union and "The Interview" (which I liked) was more about vacuous celebrity antics than the corridors of power. The only thing that comes close to BEL2 in prescience is the recent "South Park" episode "Put It Down," which of course is directly about Trump and Kim Jong-un. Its argument was that Trump needs to stop tweeting his foreign policy — what Derek Chollet of the German Marshall Fund aptly described to me as a "kind of name-calling, schoolyard insult style of diplomacy" — and ended with a song specifically directed at Trump himself.

BEL2 isn't as entertaining as that "South Park" episode, or as historically significant as "The Interview" (remember the Sony hacking). It's still reasonably entertaining if efficiently made action films are your bag, though, and it sports a decent bad movie pedigree, particularly being helmed by James Dodson of "Quest of the Delta Knights." If you enjoy finding pop culture artifacts that eerily predict the future, "Behind Enemy Lines 2" is worth a watch.