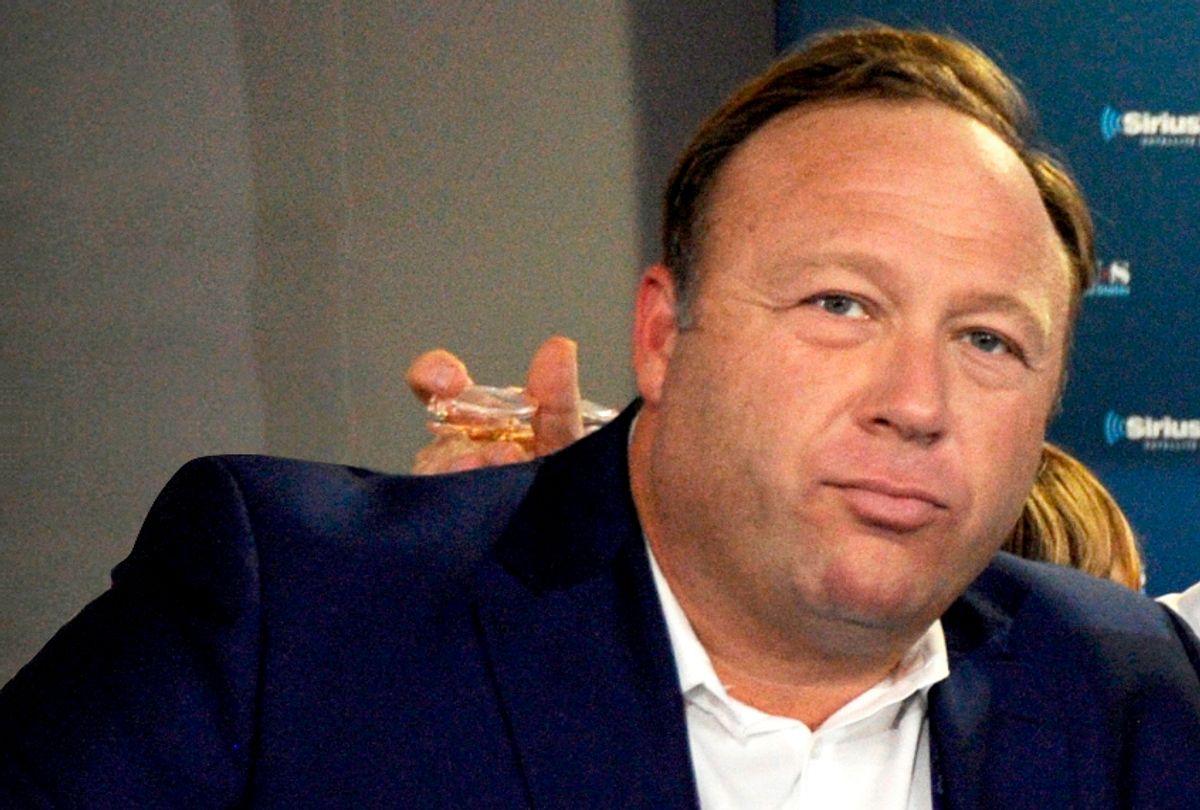 Who perpetrated the Oct. 1 mass shooting in Las Vegas that claimed 58 lives and injured up to 546 more? Was it ISIS? The CIA? The FBI? The Deep State? The Saudis? For Alex Jones, any and all of those players are suspect.

The pugnacious, potentially unhinged admiral of the Infowars media empire responded to a guest calling in to one of his recent broadcasts who was seeking clarity about what she saw as "snow" in the air, visible in footage of the aftermath of what was the largest mass shooting committed by a single person in American history (likely it was dust and debris whipped up by news and law-enforcement helicopters, but what of it?).

Jones, as he is wont to do, began to answer the question, then fired off one of his trademark, growling detours. As Media Matters for America reported, it was some classic stuff from the king of conspiracy.

"Well, I know the FBI went and picked up the caller you heard earlier when he talked about it being an Islamic attack and there being shootings all over town and helicopters being used," Jones said. "And the FBI showed up and drugged the guy and then declared national security. He’s had to leave the country just over that, so do you think they’d be having the FBI at his house in two hours after he called in about that if it was just a rumor? No, they don’t want that discussed." Okay.

Using this unconfirmed testimony, Jones reached back to one of his older conspiracy theories to truss up one of his most recent ones. "So," he said, "Vegas is as phony as a three-dollar bill, or as Obama’s birth certificate."

Jones is partly correct here. The U.S. Treasury Department has never issued a three-dollar denomination in its history, so any such bill one finds should not be considered legal tender. Former president Barack Obama's birth certificate, issued by the U.S. state of Hawaii, however, is real.

Jones continued his conversation with his caller. "They had the Saudi military was having a convention there that week," he said, in reference to a slate of running conspiracy theory connecting the government of Saudi Arabia to the mass shooting. Some theorists out there have forwarded the idea that the incident was actually the attempted assassination of a Saudi prince, some of them noting Saudi investments in local hotels and the fact that many members of the Saudi Air Force stayed in the city in late August as proof.

The caller then referred to Jones' previously spoken-of source. "Yeah, because I remember the most I’ve heard is what you’ve gone over and the other guy that had some so much research into all the planes that had changed where they were . . . " Jones then interrupted.

"Sure, well the FBI showed up and they told him, they said, 'You talk about that again, we’re going to put you in prison, because that’s classified information.' Even though he’d figured it out himself," he said. "The fact is the government, the military all knows. They’ve been ordered not talk about it because it’s all part of this deal that Trump’s got with the Saudis." He concluded, "We’ll see if that’s really the case, but that was an Islamic terror attack from all the evidence we have."

It's hard, perhaps impossible to parse any of this. And, besides, what good would that do?

What is interesting is that Jones, a fervent and fanatical supporter of President Donald Trump, seems to have made the commander in chief an inadvertent player in the conspiracy proposals. Will it be long before the man who Jones claims parrots his drivel "word-for-word" soon finds himself painted a villain in the host's imaginary wars? To be continued.

See the whole rant below.