Matt Lauer and the emails: How accused harassers conjured a fake Hillary scandal

Men accused of harassment and abuse shared a bizarre obsession with Clinton's emails. This is not a coincidence 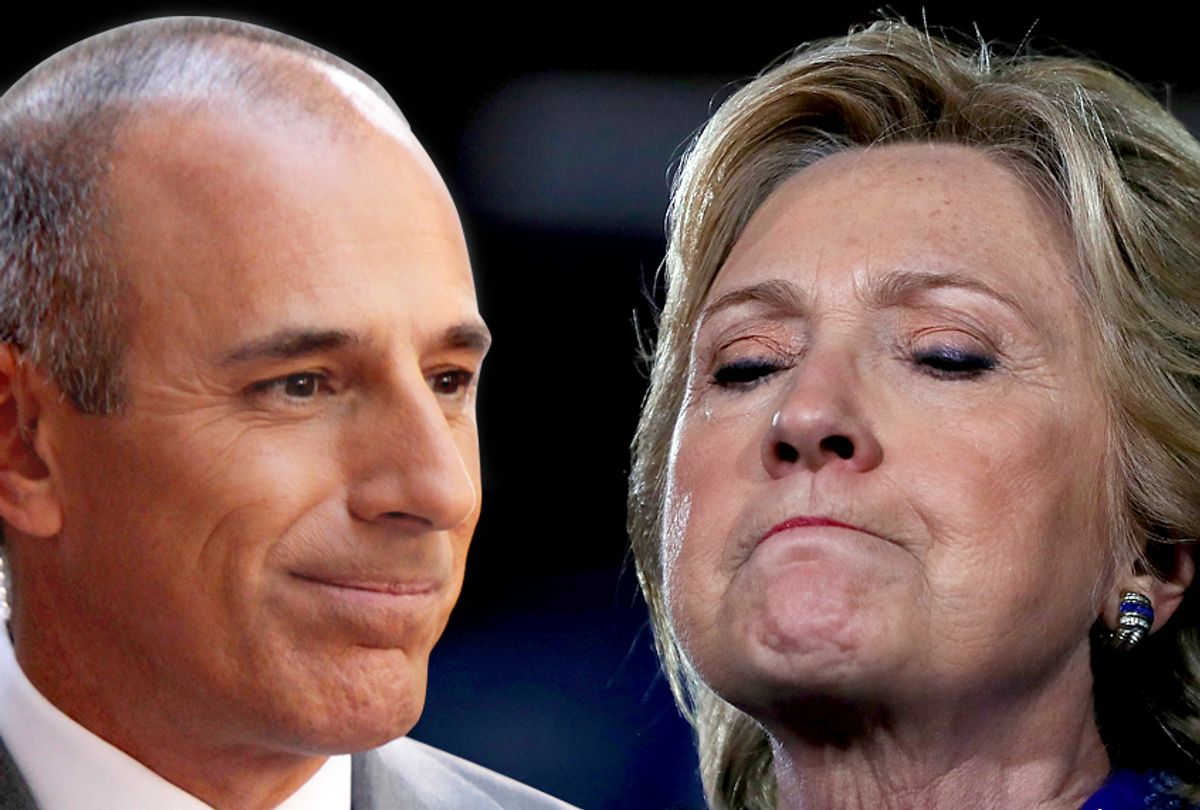 While the details continue to be maddeningly obscure, it appears that Matt Lauer of NBC News is the latest powerful, wealthy man to take a very public fall after what NBC News president Andy Lack called "inappropriate sexual behavior." In the wake of Lauer's firing, a public discussion has erupted about previous accusations against him for sexist behavior, such as his public shaming of Anne Hathaway after a predatory photographer took an upskirt photo of her, or when Katie Couric complained that he "pinches me on the ass a lot" or when rumors swirled that he had run Ann Curry off "Today."

Most of all, people are looking back to the way Lauer covered Hillary Clinton during the 2016 election. Even in a campaign season defined by unfair and sexist coverage of Clinton, Lauer's slanted reporting was noteworthy. In particular, he was one of the most prominent proponents of the notion that it was a major scandal that Clinton had used her private email account to do official work as secretary of state, even though Colin Powell had done the same thing without controversy and multiple, thorough and seemingly endless examinations of her email history revealed nothing scandalous or even mildly interesting.

Lauer's email obsession angered a lot of journalists, even journalists like Jonathan Chait of New York magazine, who isn't exactly known for his woke views on women and power. In September 2016, Lauer did two hour-long interviews with each major-party presidential candidate. He gave the softball treatment to Donald Trump, letting Trump lie repeatedly without challenging or confronting him, and without really digging into Trump's multiple real scandals. With Clinton, however, Lauer spent a full one-third of the interview on emails, even though her email history had been public, at that point, for a full year, and there was absolutely no way that interesting new information was coming out of it.

(Meanwhile, Trump was -- and still is -- refusing to release his tax returns, something Lauer didn't bring up once.)

"At this point in the campaign, Lauer’s obvious sexism is not simply a problem of unfairness in the treatment of the individual candidates; such performances have serious consequences for the fate of the nation," Adele Stan of the American Prospect argued at the time, noting that Lauer also spoke to Clinton condescendingly while letting Trump walk all over him.

It wasn't just Lauer, either. When one looks down the lengthening list of prominent male journalists who have been credibly accused of sexual harassment, one thing that sticks out is that they were all obsessed with those godforsaken emails. Charlie Rose, Glenn Thrush, Mark Halperin, Bill O'Reilly: Besides being apparent sleazeballs, they were all big fans of the idea that the thousands of Democratic emails, some released by Clinton herself and some stolen by presumed Russian agents and leaked on WikiLeaks, would somehow turn into an earth-shattering scandal. WikiLeaks is, of course, an operation run by Julian Assange, an accused rapist who spent the election leaking emails that somehow never had the shocking revelations he insinuated readers would find.

Rose went after Clinton on emails like a dog after a bone. O'Reilly seemed certain that all these emails would somehow prove Clinton was guilty of something. Halperin could barely wipe the drool off his face, so certain was he that emails would be the end of Clinton. Thrush spent years of his career making sure that the public believed that "Clinton emails" was a scandal, despite the fact that all that work produced no actual information of value.

All this faith that Clinton had some deep, dark secret that her emails would eventually reveal proved for naught. Lots of chatter in the emails about TV shows and pasta sauces, but no scandals. Some grousing about Bernie Sanders dragging out the primary, but no evidence of illegal or unethical behavior. It was a big nothing-burger, but the relentless media drumbeat about "emails" meant that the American public was convinced there was a scandal — even as many were entirely unaware of the many corruption scandals surrounding Trump.

Now we find out that many of these journalists who seemed convinced that Clinton had a deep, dark secret were likely harboring guilty secrets of their own. Their baseless campaign of persecution led, directly or otherwise, to the election of a man so full of deep, dark secrets that he's under federal investigation and still won't release his tax returns.

It may not be obvious at first glance, but the email non-scandal was fueled by sexism, which was evident even before these sexual harassment accusations. At its heart, the whole story -- which often verged on conspiracy theory -- was rooted in misogynist myths about the inherently deceitful nature of women. This paranoia is why women are usually subject to more chaperoning and control than men. It's why religious conservatives have spent four decades in a rage because the Supreme Court found in Roe v. Wade that women have a right to privacy. In the 19th century, fear about what women might get up to if shielded from prying eyes led to widespread condemnation of letting women use the postal system.

This certainty that Clinton was somehow or other doing something nefarious with her emails was rooted in these ancient fears. That was why the story would never go away, no matter how many times it turned out that there was nothing interesting in her goddamn emails.

"We see that the men who have had the power to abuse women’s bodies and psyches throughout their careers are in many cases also the ones in charge of our political and cultural stories," Rebecca Traister wrote, after the accusations against Halperin and others came out. Clinton's narrative was controlled by "men whose gender-afforded power ensured that she would have to work around and against so many dicks."

Perhaps the fake email scandal is the best example of this. So many men are not just threatened by ambitious women, but are eager to believe those women are hiding dark secrets. In many cases, those men are projecting their own sins — their own corruption, their own power-hunger, their own dark secrets — onto the women they loathe. And while watching a handful of them get fired after the fact is nice and all, it won't mean anything until we start fixing the sexist system these men did so much to uphold.