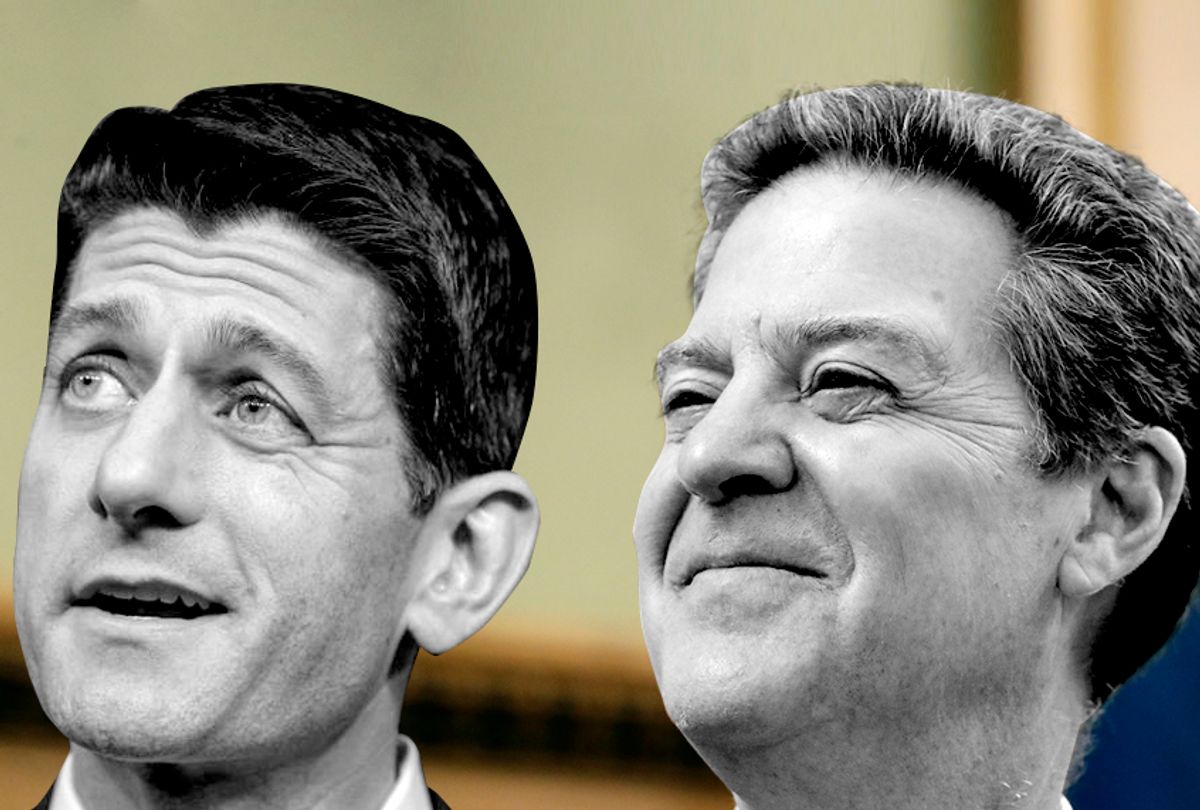 What is the most brazen political lie ever told? I submit that it is the big lie Kansas Gov. Sam Brownback spread across Capitol Hill on Wednesday, hours before every single Republican senator voted to rush a massive tax cut crafted in secrecy and without public input from experts to a full floor vote by the end of the week.

Here's what the chief executive of the Sunflower State said: "What we did actually worked.”

“If you actually looked at what we did, it actually worked for our target,” he said. “Our target wasn’t revenue, it was growth. And it did that.”

The only plausible sense in which Brownback can claim his disastrous tax cuts in Kansas worked is that they were passed, and the state’s economy was all but destroyed, yet somehow he was still reelected.

Kansas’ job growth has lagged behind the national average since 2011. The revenue shortfall that followed Brownback's much-ballyhooed 2012 tax cuts caused the state’s budget to hemorrhage so much that two-thirds of the state legislature -- which was still overwhelmingly controlled by Republicans -- passed an increase in the state income tax over his veto. It went into effect July 1 and was made retroactive all the way back to the beginning of 2017, meaning that all Kansas state employees were underpaid for six months of the year. Kansas’ debt rating has been downgraded multiple times.

Brownback lied in Washington, blatantly and unashamedly, with a straight face, while President Donald Trump traveled to Missouri, a state that borders Brownback’s, in order to lie directly to the good people of the Show Me State.

“Believe me. Believe me, this is not good for me," the president insisted, falsely claiming that the GOP tax plans that will save his family billions "will cost me a fortune.” In reality, heirs to 15 of the wealthiest Trump administration officials stand to save an amount equal to the combined net worth of 18,000 American families at the median point, according to a report by the government watchdog group Public Citizen.

There are plenty of other contenders for biggest whopper — all of which come from Republicans attempting to do to the entire country what Brownback did to Kansas.

House Speaker Paul Ryan, R-Wis., recently claimed that his cherished $1.5 trillion tax reform bill, which could cost 13 million people access to their current health insurance, is “about giving those families who are struggling peace of mind.” When a member of Ryan’s own caucus dared to disagree, declining to vote for the House version of the GOP bill because the elimination of state and local income tax deductions would drastically raise taxes on New Yorkers, Ryan refused to fundraise for the Republican, reportedly in an act of retribution.

In the Senate, Republicans who expressed reluctance over the deficit-busting bill were apparently wooed by Trump’s assurances that increasing the debt to give rich people more money is easily offset by slashing the social safety net for poor people — likely starting with the Social Security disability and Medicare benefits so many of his own voters rely on.

“The priority for the moment is middle-income tax cuts,” Trump’s Treasury Secretary, Steven Mnuchin, told Fox News this week. This completely ignores the Congressional Budget Office's finding on Sunday that what starts off as a modest tax cut for most of the middle class in the Senate version of the bill would actually increase taxes for millions of people by 2027.

“In every bracket that group as a whole will see tax cuts and so it’s just been misrepresented and I hope people will go online and look for themselves,” Sen. Rob Portman, R-Ohio, said when pressed about the bill during NBC News’ “Meet the Press” on Sunday.

Republicans are telling the greatest lie in modern politics and they are getting away with it. Trickle-down is a Republican dream that has never worked in reality and never will. Not in Kansas, not in the Land of Oz, not anywhere.

Senate Democrats tried in vain to draw national attention to this fact earlier this month. Their hearing on the financial disaster that Brownback’s failed experiment has wreaked in Kansas was overshadowed by a parade of high-level sexual assault allegations, granting the GOP an enormous and unearned gift. Republicans have been able to use these nonstop crises as cover while the mainstream media recoils in horror at Trump’s outrageous tweets and the latest in a series of powerful men behaving badly.

That is why they were able to parade Sam Brownback on Capitol Hill to peddle a blatant lie, one of the biggest ever told in American politics.

"This is exactly the sort of thing we want to do here, in Washington, but can't, at least for now,” Senate Majority Leader Mitch McConnell, R-Ky., said of Brownback’s tax cuts back in 2012.

When Brownback eliminated the state income tax for partnerships, limited liability corporations and other similarly structured entities, he promised it would act “like a shot of adrenaline into the heart of the Kansas economy.” That’s the same empty promise being offered by Republicans today.

While everyone is focused on the continuing post-Harvey Weinstein fallout, McConnell brazenly flaunted the Kansas failure to pitch his plan to hesitant Republicans. McConnell has short-circuited the normal legislative process with virtually no outraged reaction. Unlike Republicans' failed attempts to repeal the Affordable Care Act earlier this year, successive votes to pass the tax bill in the House and move similar legislation forward in the Senate have been met with little protest and self-evidently bored media coverage.

Republicans are on the verge of achieving not only their first legislative accomplishment of the year, but their single greatest goal in a generation. Everyone else is buried too deep below an avalanche of lies to put up a fight. This is why the GOP puts up with Donald Trump in the first place. Bringing Sam Brownback back to push their plan through Congress is just one last, gigantic troll of America. (For the record: Brownback is finishing his term as governor with the dubious distinction of having the lowest approval rating in the country for several years in a row. Considering that Chris Christie is still governor of New Jersey, it's an impressive accomplishment.)

The only Republican who has told the truth throughout this whole debacle has been Rep. Chris Collins of New York, a Trump ally, who at least had the decency to admit the real reason Republicans are so eager to ram this bill through Congress: “My donors are basically saying, ‘Get it done or don’t ever call me again,’” he said.