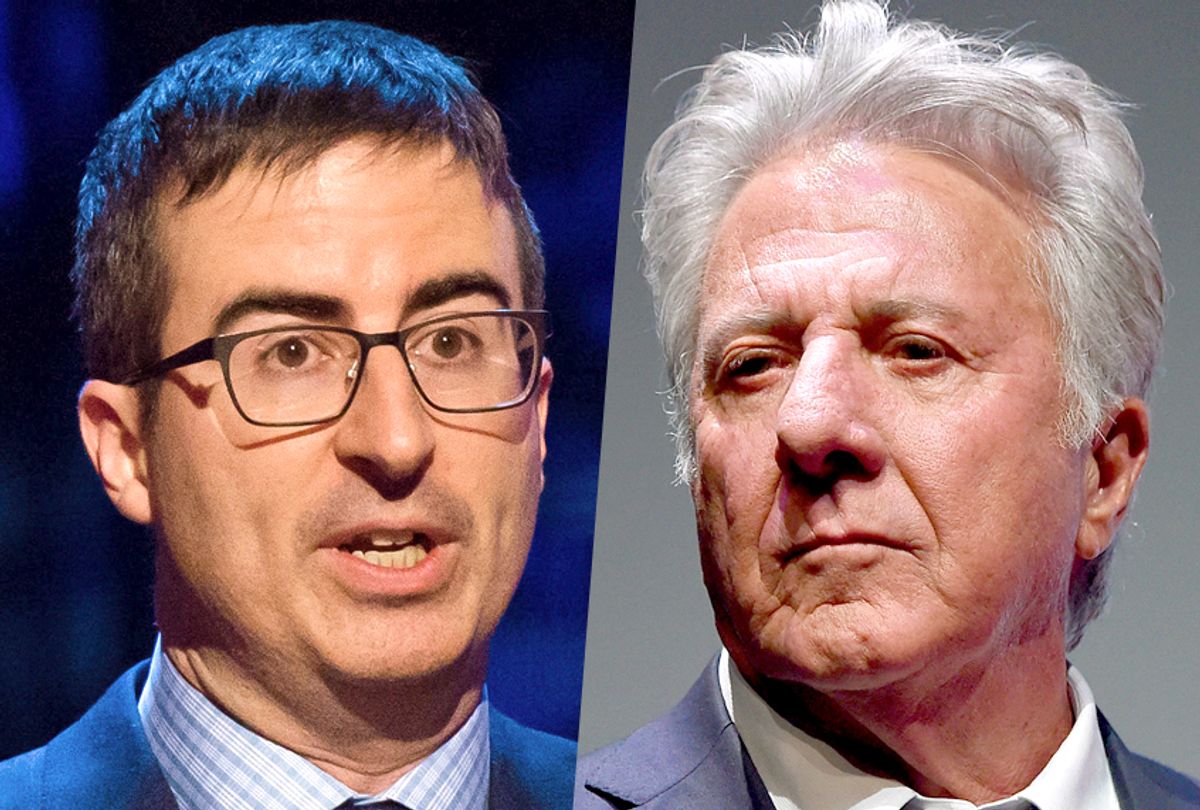 Around halfway through a 45-minute discussion tied to a 20th anniversary screening of the Hoffman film "Wag the Dog," moderator Oliver confronted the actor about the accusations. Co-star Robert De Niro, producer Jane Rosenthal and director Barry Levinson were in attendance as well.

"This is something we’re going to have to talk about because . . .  it’s hanging in the air," Oliver said, according to The Washington Post.

"It’s hanging in the air?" Hoffman replied. "From a few things you’ve read you’ve made an incredible assumption about me." Hoffman sarcastically added, "You’ve made the case better than anyone else can. I’m guilty."

From that point on the discussion shifted and "was then dominated by Oliver, Hoffman and the subject of sexual harassment," the Post reported.

Hoffman got defensive, and denied he even knew who his accuser, Anna Graham Hunter, was. Hunter alleged that when she was a 17-year-old production intern for the movie "Death of a Salesman" in 1985, Hoffman made repeated unwanted advances toward her.

"I still don’t know who this woman is," Hoffman said. "I never met her; if I met her it was in concert with other people."

At the time the allegation surfaced last month, Hoffman apologized, saying "I have the utmost respect for women and feel terrible that anything I might have done could have put her in an uncomfortable situation."

The apology continued, "I am sorry. It is not reflective of who I am."

Oliver felt that apology was insufficient, and he told Hoffman directly.

"It’s 'not reflective of who I am' — it’s that kind of response to this stuff that pisses me off," Oliver said. "It is reflective of who you were. If you’ve given no evidence to show it didn’t [happen] then there was a period of time for a while when you were a creeper around women. It feels like a cop-out to say 'it wasn’t me.' Do you understand how that feels like a dismissal?"

It appeared that Hoffman was caught off guard by the line of questioning, claiming that Oliver was putting him "on display," the Post reported.

"Do you believe this stuff you read?" Hoffman asked Oliver, after telling him that he should keep an "open mind" about the accusations.

"Yes," Oliver answered. "Because there’s no point in [an accuser] lying."

"Well, there’s a point in her not bringing it up for 40 years," Hoffman shot back. Oliver replied in disapproval and put his head in his hand, "Oh Dustin."

“The so-called, alleged comments that are made are truth now,” Hoffman said at one point. “And if you try to defend it, you’re guilty.”

Deadline reports that many in the audience seemed to side with Hoffman, asking Oliver to "Move on!” Elsewhere during the discussion, Oliver admitted that he knew the moment would be a tense one but stressed that it was unavoidable.

“I can’t leave certain things unaddressed,” Oliver said. “That leads to me at home later tonight hating myself, asking, ‘Why the f–k didn’t I say something? No one stands up to powerful men.'" Hoffman then turned to producer Levinson asking, “Am I the powerful man?”

As well, Hoffman claimed that his role in 1982's "Tootsie," in which he played a man dressing as a woman, should stand as proof that he is incapable of mistreating women. “How could I have made that movie if I didn’t have incredible respect for women?” he asked rhetorically.

See a video of some of the exchange below.