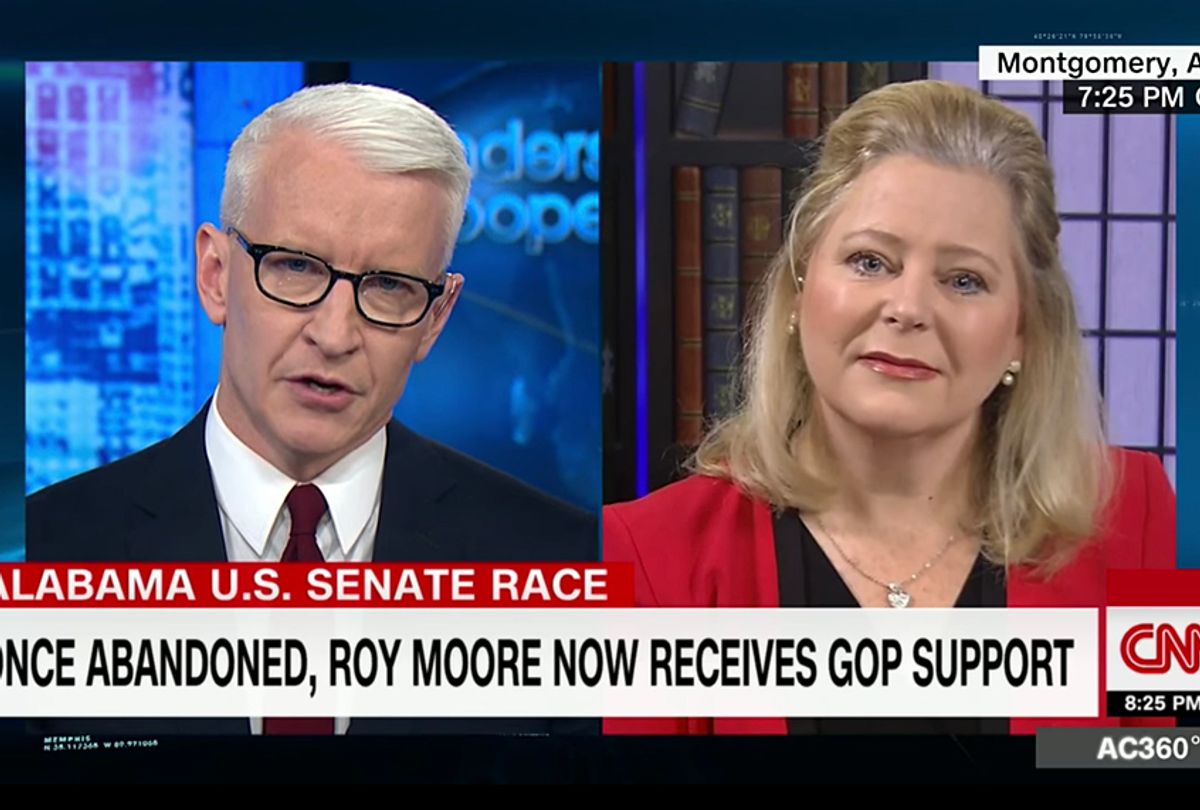 During an appearance on CNN on Wednesday, Roy Moore spokeswoman Janet Porter dodged question after question about her candidate's dodgy past and political positions, but found her feet held to the fire by host Anderson Cooper.

After describing the media reports of Moore's sexual misconduct against underage girls as a "lynch mob" and a "pile on," Porter went on to avoid answering a question about whether Moore stands by his earlier statement that homosexuality should be outlawed.

"Does Judge Moore still believe that homosexual conduct should be illegal and that homosexuality is the same thing as bestiality?" Cooper asked Porter.

"[Doug Jones] wants to put out a welcome mat in front of these young girls, if you are a junior high school girl or if you are a high school girl, what Abortion Jones is saying is, 'We're putting out a welcome mat to any boy who's feeling like a girl that day, he's free to walk into the bathroom, the locker room with his camera phone, and shower with your daughter,'" Porter told Cooper.

"A lot of people talk about God and how they're Christians. And in fact if you look at the commercials of Roy Moore's opponent, he's telling everybody what a great Christian he is . . . " Porter told Cooper.

"You don't know the answer about 9/11, do you?" Cooper asked matter-of-factly and rhetorically.

Cooper then asked a question about Moore's intolerant statements about Muslims.

"Does he still believe an American citizen who is a Muslim should not be able to serve in Congress?" Cooper asked Porter.

"I think that what he's getting at there is that we believe in the rule of law by the Constitution, not Sharia law. And I think that's really the bottom line of what we're looking at," Porter told Cooper.

As Porter attempted to bulldoze over Cooper while he tried to get her to answer the question, the host succumbed to exasperation.

He then asked Porter about Moore's claims about whether there is Sharia law in the United States. She dodged that, as well as a question about Moore's stance about a racist conspiracy theory.

"Does he still believe Barack Obama wasn't born in the United States? Because he didn't believe that in the past," Cooper asked Porter.

"That issue's kind of come and gone," Porter told Cooper.

Every time Porter avoided answering one of Cooper's questions, the CNN anchor called her out on her unwillingness to do so. Porter instead tried to pivot the focus back to Moore's touchstone issues — opposition abortion, supporting gun owners and stopping undocumented immigration — and became hostile to Cooper when he refused to let her do so.

Porter made similarly bizarre claims when defending her champion during an interview on Tuesday with CNN's Poppy Harlow.

"Congratulations on your unborn child. That's the reason why I came down as a volunteer to speak for Judge Roy Moore, 'cause he'll stand for the rights of babies like yours in the womb, where his opponent will support killing them up until the moment of birth," Porter told Harlow, who is pregnant.

After Harlow confronted Porter with the numerous accusations of sexual misconduct against Moore, the spokeswoman replied that she didn't understand why people weren't more focused on the women who had never made accusations against the Republican Senate candidate.

"Poppy, we need to make it clear that there is a group of non-accusers that have not accused the judge of any sexual misconduct or anything illegal," Porter told Harlow.