How much do offended people really love the national anthem?

Why are white conservatives so triggered by black athletes taking a knee? 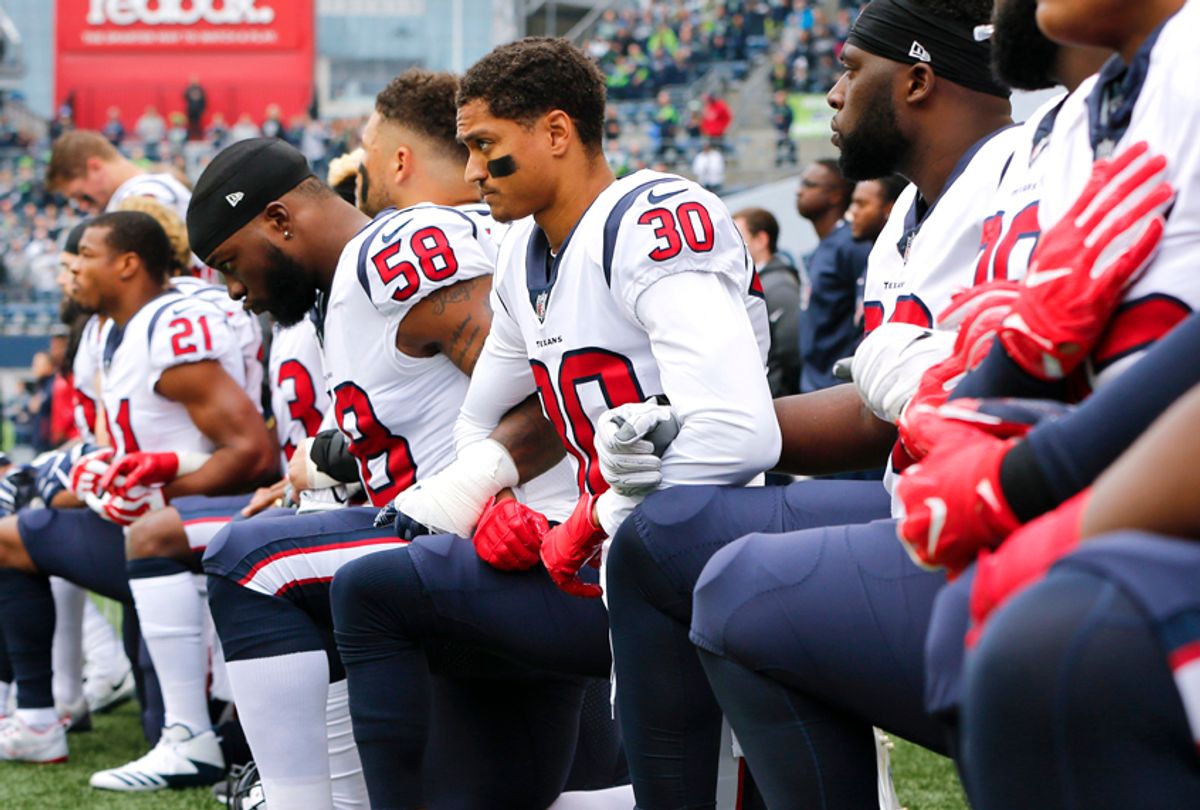 Members of the Houston Texans kneel during the national anthem on October 29, 2017 (Getty/Jonathan Ferrey)
--

I ate dinner with some white people in Baltimore the other day.

I have to say white people, because Baltimore is 67 percent black, and I never really even met any white people until college, other than housing police and some teachers. Greg, an aspiring novelist I know from Philly who is new to Baltimore had invited me over to meet some of his friends, a trendy looking group of writers and visual artists, most of whom are not from Baltimore.

“Then why come to a dinner party?” Julie replied.

“Sorry, my apologies,” one of Julie’s friends said. “I always thought home cooked meals were a big black tradition. The black people I worked with always talked about how great their family meals are. I so wanted to attend one!”

“Now you have me looking like a creep!” I said.

I don’t hate home cooked meals. I just think that people oversell them, always talking about how their mom has the best chicken, and it’s never actually true. I also hate doing dishes, waiting for people to do dishes, loading dishes into dishwashers and hanging around after I eat.

“I like to leave as soon as my food is finished,” I said. “You can’t eat a home cooked meal and walk away after the food is gone. It’s disrespectful to the chef. But I’m ordering take out, so I can leave when I want! Anybody like pho? I’m ordering pho!”

My food came as the rest of the party started eating. We sipped wine and they enjoyed their vegan chili. They laughed as I explained to them that black people don’t really know what casserole is, and I laughed when they said the same thing that white people always say when I ask about casserole: “You just put a bunch of stuff in a pot, throw cheese on top and bake it!”

“You guys see Beyoncé hand Kaepernick his award the other night?” Julie said, flashing her phone and passing it around the table. “My heart melted!”

Julie was talking about former 49ers quarterback Colin Kaepernick receiving Sports Illustrated’s Muhammad Ali Legacy Award, for the movement he started around taking a knee during the national anthem, in addition to his work as an activist on and off the field. iPhones are definitely contagious, because everyone else pulled theirs out after Julie did. I saw the image of Beyoncé in her beautiful dress presenting the award and hit play on a clip of Kap’s speech where he said, "I accept this award not for myself, but on behalf of the people. Because if it were not for my love of the people, I would not have protested. And if it was not for the support from the people, I would not be on this stage today. With or without the NFL's platform, I will continue to work for the people, because my platform is the people."

The table was 200 percent liberal, so everyone agreed with Kap’s stance, as most rational people do. This country is supposed to offer us a right to protest peacefully in any way we want and he’s obviously being penalized for that in a way that proves it’s clearly a black and white issue.

“This is racism at its finest. Let me ask y'all a question, and I’m not being funny,” I said to the group, standing up, tapping a bowl with a spoon. “Do white people really love the anthem like that? I mean, do white people sing it in the shower? Y'all didn’t sing it before we ate dinner. Will you sing it when I leave?”

Everyone laughed, even me.

“Seriously!” I continued. “I don’t get the hype with this song! Seems like I only hear it at sporting events and it’s really not that big of a deal to most Americans. All of these people walking around pretending to be offended. Am I crazy? I really need answers.”

Just like the white people I posed this question to at work, the bulk of the room said they didn’t really think about the song until Kap’s silent protest.  One guy said, “It’s important because my grandpop served our country, but I never sing or really get choked up when I hear it. I actually don’t know all of the words.”

“My point exactly!” I yelled. “These fake-mad people complaining about a song that will never make their playlist are just annoying.”

Dinner was fun. I said my goodbyes and jumped in my Lyft. While thumbing through my Twitter feed I came across a post from Tomi Lahren. Remember her? The Ann Coulter wannabe who hates anything and everything progressive? She tweeted: “Police-hating Beyoncé presents police and America-hating Kappy with a 'legacy' award. This is how far we’ve fallen. Wow.”

I’m sure many people agreed with her, as she received thousands of retweets and endorsements, which goes to show that it doesn’t matter if you pick a real cause or not, there’s still so many people in this country who are just racist. Lahren is supposed to be a journalist, and tweeting that Kap hates America is just a flat-out lie — as big of a lie as saying Beyoncé, who employees dozens of cops, hates cops. Neither Kap or Beyoncé use hateful language when talking about our country, they only acknowledge what really happens and then also offer real solutions, which isn’t that popular these days.

Instead of Lahren tweeting “This is how far we have fallen,” she should’ve posted look how little we’ve grown since 1814. Because her barbaric mentality, just like that of the people who pretend to be mad about athletes kneeling during the anthem, is what’s keeping us divided, hindering any growth dealing with social relations and allowing thousands of people to mask their racism through fake patriotism. I'm glad I’m lucky enough to break bread with groups of people who are capable of seeing through that BS.