The DNC's day of reckoning is here

Will the Democratic Party reform or close ranks? 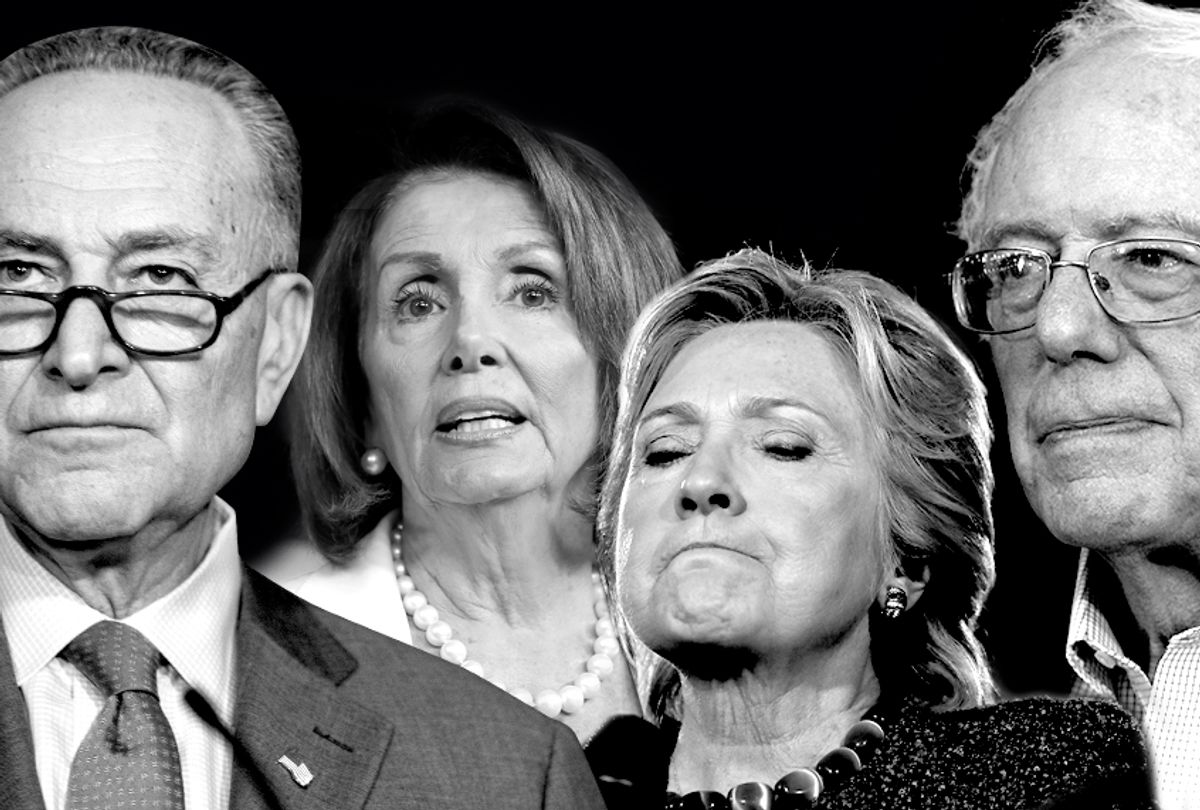 Heading into the Democratic National Convention, the underdog candidate and his supporters feel that the primary process is rigged. Citing unfair party rules, especially the use of superdelegates, the campaign charges that the nomination process is ''inequitable,'' ''demonstrably unfair'' and ''distorted by rules that favor insider politics.'' The “outsider” campaign files a letter of complaint to the party along with a report that details the various ways that the DNC is biased to support an insider candidate.

No, this is not a story about Bernie Sanders. Instead it is a story from 1988 and the “outsider” candidate is Jesse Jackson. Jackson lost the nomination to Michael Dukakis. Dukakis then lost the general election to George H. W. Bush, who won 426 electoral college votes. Dukakis won only 111.

What is new, though, is that unlike the story of the Jackson campaign, the public support for Sanders and documented evidence of pro-Clinton bias has made it hard for the DNC to just sweep the accusations of a rigged election under the rug.

But here’s the thing. The dilemmas facing the DNC are not so much an issue of Sanders vs. Clinton; rather they are the much larger question of whether the party is ready to reverse its oligarchic tendencies and take seriously the need for party reform. It’s of no little irony, for instance, that Donna Brazile’s exposé of party bias and financial manipulation favoring Clinton failed to acknowledge that she herself was one of those highly paid consultants who took money away from local campaigns, even as she accuses Debbie Wasserman Schultz of financial mismanagement and excesses as chair of the DNC. She collected $88,000 in payments from the DNC just this past March.

Even worse, CNN fired Brazile after learning she passed debate questions to the Clinton camp. The DNC named Brazile interim chair, replacing the disgraced Wasserman Schultz. It’s of no little concern to think that CNN is more ethical than the DNC.

This is all to show that the problem with the party is that it is completely tone-deaf to its own incredibly obvious hypocrisies. As Sanders put it himself in a recent op-ed, “The party cannot remain an institution largely dominated by the wealthy and inside-the-Beltway consultants.”

Thus far, though, all signs suggest that party leadership will fail to seriously address the core reasons why the party lost in 2016, why Sanders supporters feel disenfranchised, why only 30 percent of eligible voters identify as Democrats, or why 71 percent of millennials want a third party.

After the 2016 election, rather than build alliances with Sanders supporters, the DNC's Executive Committee was purged of Sanders allies. Across the board the DNC doubled down and alienated the Sanders wing of the party. As Sanders wrote about the Democrats’ failure to offer a clear vision for the party, “Certainly there are some people in the Democratic Party who want to maintain the status quo. They would rather go down with the Titanic so long as they have first-class seats.”

In the wake of significant pressure to take seriously the loss to Trump as well as the documented cases of dysfunction, disarray and dishonesty in the party, the DNC created a Unity Reform Commission tasked with offering a slate of suggestions to reform the party and heal the rift between the Clinton and Sanders camps. It is holding its final meeting Dec. 8-9 in Washington, D.C.

Sanders, among others, offered a list of reforms: eliminate the superdelegate system, hold open primaries, make it easier for people to participate in caucuses and practice transparency in the financial and policy workings of the Democratic Party. These are all issues for which there is considerable public support.

Yet, a recent co-authored CNN op-ed by Tom Perez and Keith Ellison suggests that only some of these recommendations are being taken seriously. The DNC also gave less than 48 hours notice — waiting until late in the day on Dec. 6 — to publicly disclose the times when the final meeting of the Unity Reform Commission would take place, a move that appears to be designed to eliminate any voices of public dissent from the meeting.

Since the election of Barack Obama in 2008 the party has lost more than 1,000 seats in state legislatures. The GOP currently holds the governorship as well as the entire legislature in 26 states, while Democrats exercise such control in only six states. Republicans control 34 (soon to be 33) out of 50 governorships. Republicans now control both legislative chambers in 32 states, up from 30 before the 2016 election. They control the White House, the Senate and the House of Representatives.

As recently as 2010, Republicans controlled as few as 14 states.

This is all to show that the DNC is on life support, or, as a report by a task force of party activists who hope to influence the Unity Reform Commission’s final meeting suggests, the party is dead and in need of an autopsy.

Released before Brazile made her revelations of party bias in Hacked, “The Autopsy Report” was spearheaded by a team that includes Norman Solomon, co-founder of RootsAction.org, and Karen Bernal, chair of one of the California Democratic Party’s largest caucuses, the Progressive Caucus. Their core argument was that “after a train wreck, investigators scrutinize the causes.” Yet after the stunning loss of Clinton to Trump, the DNC refused to take seriously the need to rethink its strategies. Focused on using the Trump win to consolidate a unified Democratic opposition, DNC leadership ignored dealing with any of the party’s own internal failures.

As the “Autopsy Report” and the story of the Jackson campaign shows us, the Democrats have long tried to play a game where they profess a commitment to left politics, but actually practice a fairly consistent program of cronyism and oligarchic tendencies. Democrats have spent years cozying up to corporate interests, offering a policy referred to as a “third way” that claims they can be both pro-market and pro-labor. Yet beginning with the election of Bill Clinton, policy after policy has tilted toward corporate interests and away from those of the working class. Even worse, these practices have alienated the party’s base, losing young voters, voters of color and the working class. In one stark example, “The Democratic Party has experienced an 11 percent drop in support from black women according to one survey.”

Meanwhile the DNC has suggested that its future lies in attracting centrist Republicans. “For every blue-collar Democrat we lose in western Pennsylvania, we will pick up two moderate Republicans in the suburbs in Philadelphia,” Chuck Schumer explained going into the 2016 election. What Schumer failed to get — besides the fact that he was completely wrong — is that a party politics that appeals to those moderate Republicans may well be simply too Republican to appeal to a true left-leaning voter.

Despite Hillary Clinton’s claims that she lost due to misogyny or Russian meddling or Bernie bros, there has not been enough attention to the reality that she lost because her politics too closely resemble the pro-corporate policies of the right — policies first openly adopted by her husband.

As Jake Johnson explains for Common Dreams, “While the party still professes its dedication to the working class, as Hillary Clinton did in her speech at the Democratic convention, a closer look at its donor base — along with its voter demographics — reveals a different story.”

The problem is that this sort of cozy connection to Wall Street and what Hillary Clinton described as “good billionaires” simply falls flat on the progressive public. As Matt Taibbi has noted, "politicians who promise they can deliver change while also taking the money, mostly just end up taking the money."

It is not just favorability of politicians that shows a profound dislike for Democratic party insiders. November 2017 Gallup polling found that 31 percent of Americans identified as Democrat, 24 percent identified as Republican, and 42 percent as Independent.

Whether we cite polling numbers or favorability ratings or public outcry, one thing seems clear: the DNC is having a hard time confessing to its own hypocrisies and working with its base to redefine itself. Even worse, it refuses to explain its practices.

This is why the DNC’s Wasserman Room may well function as a metaphor for all that is wrong with the party.

Right off the lobby of the DNC headquarters in Washington, D.C., there is a Wasserman Room. Not a Martin Luther King Room, not a Cesar Chavez Room, but a Wasserman Room. When I wrote to a regional press secretary asking about the history of the room, I got no reply. I was left to wonder if the room had ties to Debbie Wasserman Schultz’s family or maybe was connected to longtime Democrat Lew Wasserman. One thing is clear, it is not named after a revered Democratic politician or activist. The existence of the room and the secrecy over its history encapsulates the reality that the DNC has become a donor-driven party uninterested in explaining itself to the public. The Wasserman Room is like the DNC’s first-class accommodations on the Titanic.

So, as the Unity Reform Commission enters its last round of deliberations, the first question that needs to be answered is whether the DNC is ready to give up its first-class accommodations on the Titanic and start fighting for a legitimate left platform. And, if it chooses to hold to its oligarchic legacy, the next question is whether the left will keep fighting for reform or whether they will jump ship.