In 2017 assumptions about sex and workplace have been up-ended, somebody better tell the firefighter calendar guys 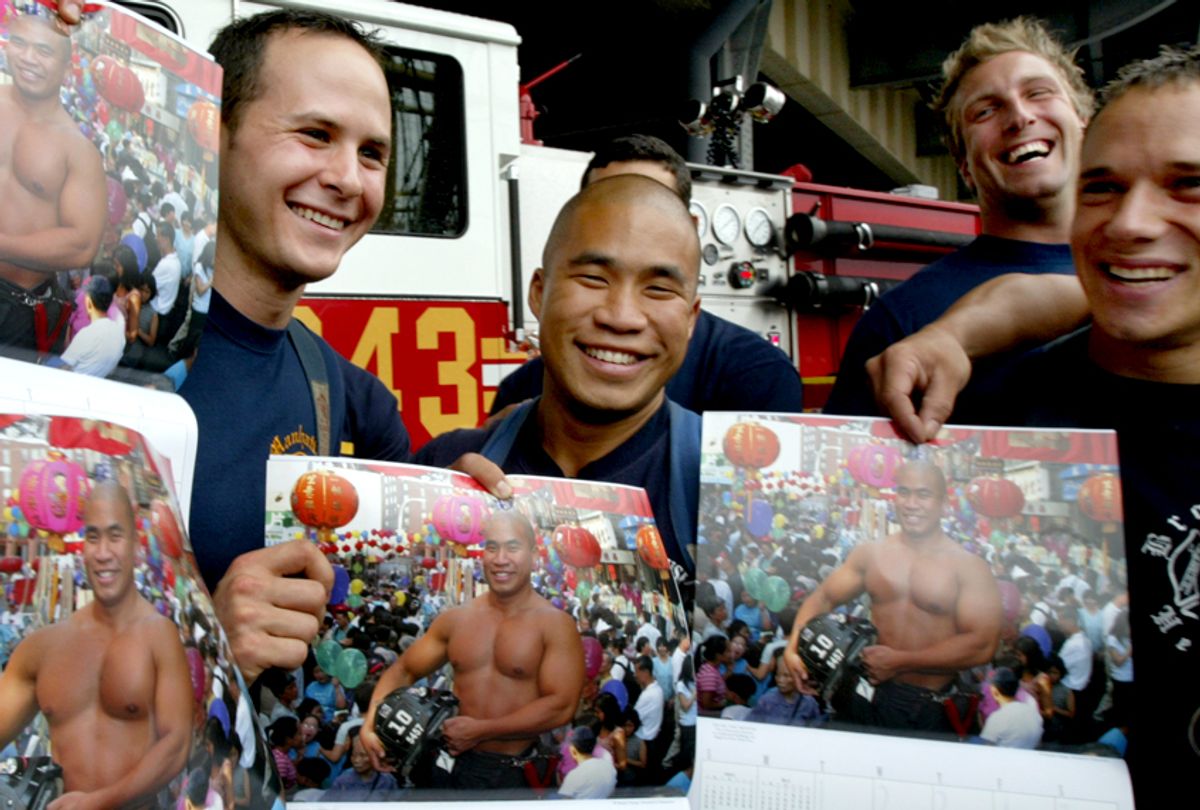 In a small, comfortably crammed souvenir shop in one of downtown Manhattan’s municipal buildings on December 5, men and (mostly) women stood in a line that wound around display racks of baby-sized NYC Traffic Cop night glow safety jackets and DOE Christmas ornaments. They were either waiting to purchase a 2018 Fire Department of New York calendar or waiting to get theirs signed by seven of the firefighters featured in the calendar who were sitting, somewhat monumentally,  in the corner.

“I see you found your favorite month!” said a smiling photographer in a yellow jacket named Katy, snapping my picture with my newly signed calendar. Behind me, September waved his mother over from the cash register to get her calendar signed.

The signing was no large, public event. Mostly city workers attended along with friends and family of the FDNY. Compared to events associated with the likes of South Florida and Australia’s calendars, the New York signing was modest. As a result, the city’s calendar brings in humbler donations and funnels them into a single charity, the FDNY Foundation, which funds fire safety education, CPR training for teens, and equipment for the FDNY.

When stacked up against the showmanship emphasized by these other regions’ calendars, it’s really no surprise that New York’s fundraising dollars also pale. After all, sex sells, and some firefighter calendars are happy to capitalize.

“I always wanted to work out and play the part of a firefighter,” said Al Lawrence, who’s worked as a firefighter paramedic for Dazie Fire Rescue in South Florida for the past 17 years. This is his fifth year in the South Florida Firefighters Calendar, which he said requires a serious workout regimen and some dancing skills.

“You have to be in great shape, and the people will tell you, You don’t look like your picture in the calendar, are you Photoshopped? They want to see the real you, so you have to put the work in and the preparation to be what they’re looking for.”

“They” are the people who show up to the calendar’s various charity fundraising events, which raise money for charities like Here’s Help, a drug rehabilitation program, and Baby Safe Haven. The largest of these events is Secretary’s Day, when judges and fans select which firefighters get to appear in next year’s calendar.

Tables range from $300 to $1,000 at the event, with more expensive tables located closer to the stage. “Secretary’s Day is huge, it’s like 1,000 women,” said Lawrence. “Women get the day off, bosses send them.” As for aspiring calendar models’ role at the event, they pick a song, come on stage to that song, and “do a dance, a skit, or something — you can’t just go out there and take your shirt off.” Women scream and throw roses at the men, who gyrate and gleam in stage lights. Then, the audience votes.

“I believe, to date, we’ve made about $250,000 in donations to local charities here,” said Lisette Rodriguez, director of development, marketing, and events for the calendar, which started in 1992. Funds come from the calendars’ sales and various events, including Secretary’s Day, “club events,” and holiday appearances at the mall. Secretary’s Day is “kind of a party atmosphere,” she explained, “but it’s the most effective at helping us raise money for charities.”

“We’ll have food catered in, we’ll have a bar, and we’ll have judges that are local celebrities, news anchors, business leaders from the area,” Maness described. “The candidates will come out and do a bio about themselves on stage, [they’ll] do a talent, a lot of them will dance around . . . give their background, and talk about their aspirations for the future.” But unlike Secretary’s Day, the best table costs $250, and though tickets cost $25, “we will not turn anybody down until the fire marshal says we’re at capacity,” Maness said.

Also unlike Secretary’s Day, the audience at Kansas’s “judging event” doesn’t ultimately pick who gets to appear in the calendar. The calendar’s board of directors does — all of whom are volunteers, along with the calendar’s photographer — and they do it based more on the firefighter’s character than his impressive physique.

“If you’ve looked at other firefighter calendars from across the world, you’ll see a lot of sexual or provocative nature in them and that’s something that we don’t want because we’re a charitable organization from our roots,” Maness said. The calendar heavily emphasizes both cancer and suicide prevention among firefighters, funding two, former firefighter speakers who travel the country to promote awareness of both issues, respectively. “So we strive to promote health and fitness and aren’t necessarily trying to present firefighters in a way that’s going to make money for us.”

The selection process is even more demure in New York, where, after getting their applications accepted, candidates show up to the Fire Museum in Manhattan and get their picture taken “holding a card with your name and where you work on it,” described Lieutenant Bill Lynch, November in 2018’s calendar. Candidates pose for a forward-facing picture, two angled ones, and “one embarrassing one where you had your back to the camera and had you flex your muscles.” After that, they find out whether or not they’ll make the cut.

Meanwhile, Lawrence in South Florida works out frequently to “present the image of a firefighter” to the calendar’s fans all year round, and Australia’s calendar photo shoots look like “a full on movie production,” according to David Rogers, director of the Australian Firefighters Calendar.

Australia’s internationally recognized firefighter calendar models recently returned from New York, where they’d made multiple television appearances, including on Steve Harvey’s talk show. Since its inception in 1993, the Australian calendars (there are now three, the classic “Hot Firefighters” calendar, the “Animal Calendar” — think hot firefighters posing with koalas—and the “Puppy Calendar” — you get the gist) have raised around $2.3 million, with people buying in the US, UK, Germany, and countries throughout Asia.

“We’re very selective of who we put in [the calendars] because it’s representative of Australian culture,” explained Rogers, who noted that the product is “monstrous overseas.” The selection process for getting into the calendar involves a photo judging contest, where a panel of “about 20 women” see photographs of firefighters who would like to be featured and pick their favorites.

“[The women] come from our charity or corporate partners [and] battle it out.” Rogers said the judges make comments like, “What are you picking that guy for, he’s bloody ugly,” as they hold up ratings of 1, 3, 7, or 10. “I didn’t have enough pieces of paper to do more,” he explained.

The Australian Firefighters Calendar donates to charities like the Children’s Hospital Foundation, and because they’ve gotten so popular outside of the country, they also offer funds to organizations abroad. “We donate a dollar from every calendar to the California wildfire relief fund in the US,” Rogers said. “We’ll continue to do that because people [in the US] keep buying the calendar.”

Back in New York, Lieutenant Lynch wasn’t sure how many people showed up for the men’s calendar signing this year, but he said “it was a very good turnout — the line looped around inside the store and it went outside.” At one point during the low-key event, Lynch noticed Maria Valenzuela, an emergency medical technician featured in the women’s FDNY calendar, waiting in line. He good-naturedly announced that she’d be available to sign anybody’s women’s calendars.

Reflecting on his own shoot for the calendar, Lynch noted that sex appeal was never explicitly a part of the equation. “In fact, at one point, my bunker pants — because I wasn’t wearing my uniform pants underneath [or] a belt, so they were a little loose — they actually told me to tighten them up and pull them up a little bit to keep it classy,” he said.

In Australia’s calendars, that clearly wasn’t a concern.