As Mueller closes in on Trump, the right pushes back: Will he be fired?

With Trump in trouble, his allies argue that the entire Mueller investigation is a grand conspiracy. Will it work? 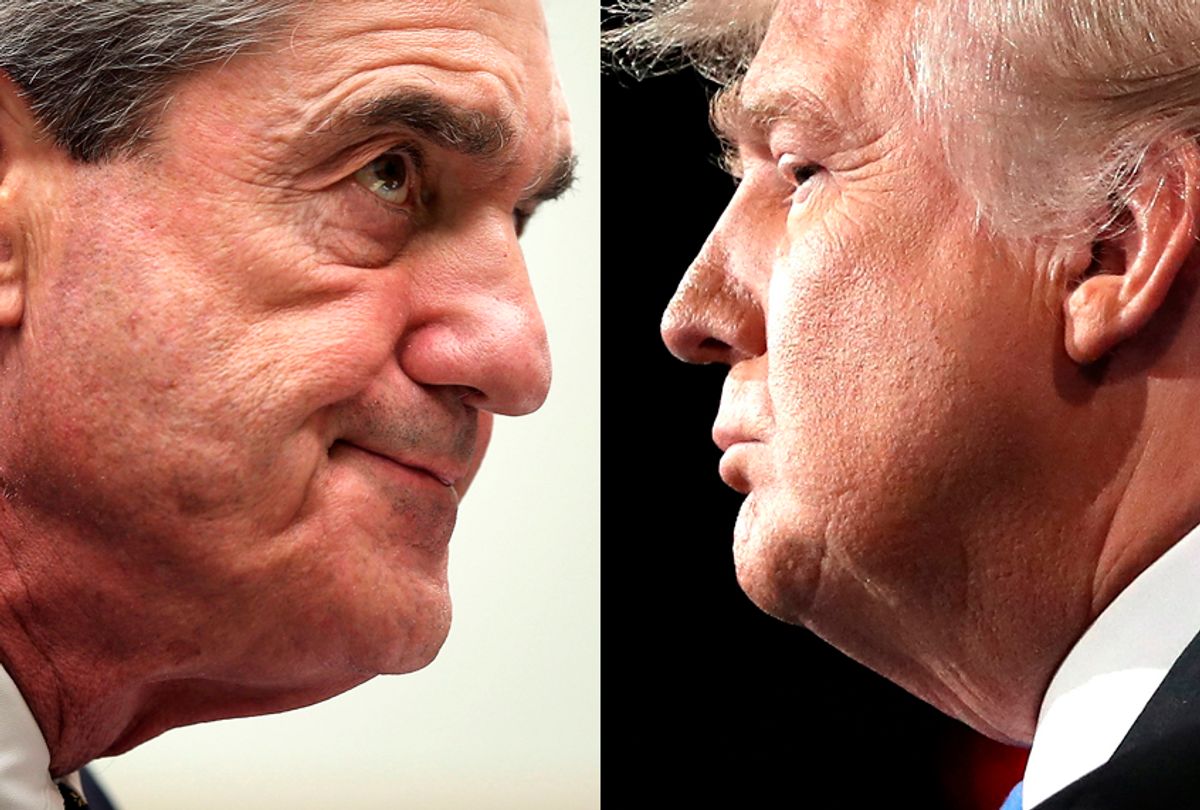 Rep. Adam Schiff, D-Calif., appeared on CNN on Sunday and laid out the state of the investigation into Russian collusion with the Trump campaign in stark, simple terms:

It is. I would also add, as I wrote last week, that numerous members of the Trump transition team apparently knew that Michael Flynn told the Russian ambassador to tell his government not to react to the sanctions the Obama administration had just imposed upon them. That's damning too. The Russians were essentially told, "Don't worry, we'll make sure you aren't punished for helping us win the presidency."

Whether laws were broken, beyond the charges filed so far against four top Trump advisers, we don't yet know. But it's clear that special counsel Robert Mueller is pursuing leads in a number of directions, from possible financial crimes to obstruction of justice to conspiracy. With former national security adviser Michael Flynn pleading guilty to lying, and agreeing to cooperate, this investigation has moved beyond the campaign to the transition and the White House. It's very serious.

And as anyone could have predicted, it was inevitable that the president's supporters in the media and the Republican Party would start to push back and try to delegitimize the investigation by attacking Mueller. This is the usual pattern in these presidential scandals.

Everyone in politics knows about the "Saturday Night Massacre" of 1973, when Richard Nixon demanded that Attorney General Elliot Richardson fire special prosecutor Archibald Cox, after the U.S. Court of Appeals overruled the president's claim of executive privilege. Richardson refused and resigned, as did his deputy, William Ruckelshaus. It was left to Solicitor General Robert Bork, third in line at the Department of Justice, to do the deed. Ten months later, Nixon was forced to resign in the face of certain impeachment. His successor, Gerald Ford, pardoned him shortly thereafter.

In the Iran-Contra scandal, the Republicans went after independent counsel Lawrence Walsh with everything they had, even granting immunity to the Reagan administration's henchman, Lt. Col. Oliver North, so he could arrogantly testify before the whole country that he was proud to have broken the law on behalf of the United States of America. That investigation was finally ended when President George H.W. Bush preemptively pardoned former Defense Secretary Caspar Weinberger and five other government officials on Christmas Eve 1992, as Bush was on his way out the door.

Democrats mercilessly battered conservative Republican judge Ken Starr, who was appointed independent counsel in the Whitewater investigation when his predecessor failed to turn up any crimes. This was a key to the Democrats' success in maintaining public opinion during the Lewinsky sex scandal, because it seemed that Starr had gone far afield from his original mandate to investigate an Arkansas real estate transaction from the 1980s.

So now we have Mueller, a former U.S. attorney and the longest-serving FBI director after J. Edgar Hoover, investigating President Trump and the 2016 election. If it is true that Trump coordinated with the Russian government during the election and then obstructed justice to cover it up, it is the most serious presidential scandal in American history. Nixon horrifically abused his power, the Reagan administration defied the will of Congress and Bill Clinton lied about an extramarital affair. This is of a different magnitude altogether.

The Republicans are obviously aware of the danger and are frantically circling the wagons. They spent months throwing various ideas at the wall, including the obscure (and largely fictitious) Uranium One scandal and other Clinton Foundation matters, in an attempt to force Mueller to resign on the grounds that he was FBI director at the time. Now they've finally settled on a grand unifying theory: the Justice Department, the FBI and the special counsel's office are all hopelessly corrupt and compromised due to their fealty to Hillary Clinton and hostility to Trump.

The theory goes like this: James Comey and his men covered up Hillary Clinton's crimes, and Mueller and his team are now trying to railroad Trump. This thesis is based on the fact that an FBI agent who was involved in both cases sent some texts to his girlfriend which were allegedly anti-Trump. Muller fired him last summer and he was demoted to the bureau's human resources department.

Trump's most ardent media advocate, Sean Hannity, came out with guns blazing last week. He condemned Mueller's "partisan, extremely biased, hyper-partisan attack team" as "an utter disgrace." He said "they now pose a direct threat to you, the American people, and our American republic."

Fox Legal Analyst Gregg Jarrett said "I think we now know that the Mueller investigation is illegitimate and corrupt. And Mueller has been using the FBI as a political weapon. And the FBI has become America's secret police. Secret surveillance, wiretapping, intimidation, harassment and threats. It's like the old KGB that comes for you in the dark of the night banging through your door."

Here is Fox News' Jeanine Pirro over the weekend:

Meanwhile, Trump's allies in Congress are also ratcheting up the crazy:

People wonder why Graham has suddenly become such an obsequious Trump lapdog. My suspicion is that Graham thinks he can distract Trump from doing something that will totally destroy his presidency, with Clinton bait and unctuous flattery. It won't work, of course.

Trump's allies in the House have escalated their attacks as well, notably Rep. Matt Gaetz and Rep. Ron DeSantis, a pair of Florida Republicans Trump huddled with aboard Air Force One on his way to the Roy Moore rally in Pensacola last Friday night. DeSantis has been pushing legislation to cut off Mueller's funding and Gaetz has said that America is "at risk of a coup" from Mueller, and has introduced a resolution calling for him to be fired.

All of this, from the right-wing media to the GOP Congress, is designed to push Trump to fire Mueller -- and if that fails, to discredit Mueller's findings among their followers, as Paul Waldman argues here. But considering the history of partisan attacks on special prosecutors and independent counsels, this can hardly come as a surprise to Mueller and his team. Mueller has been in high levels of government for many years; he's not a political naif. He undoubtedly knew this was coming.

We don't know whether or not Mueller has laid enough landmines to protect his investigation, although there are some indications that he's made the effort. But if Trump's rhetoric on Friday night is any indication, when he called the system "rigged" and "sick," we may be about to find out.