Why do Republicans love their massively unpopular tax bill? Because it punishes nonwhites, and that never fails 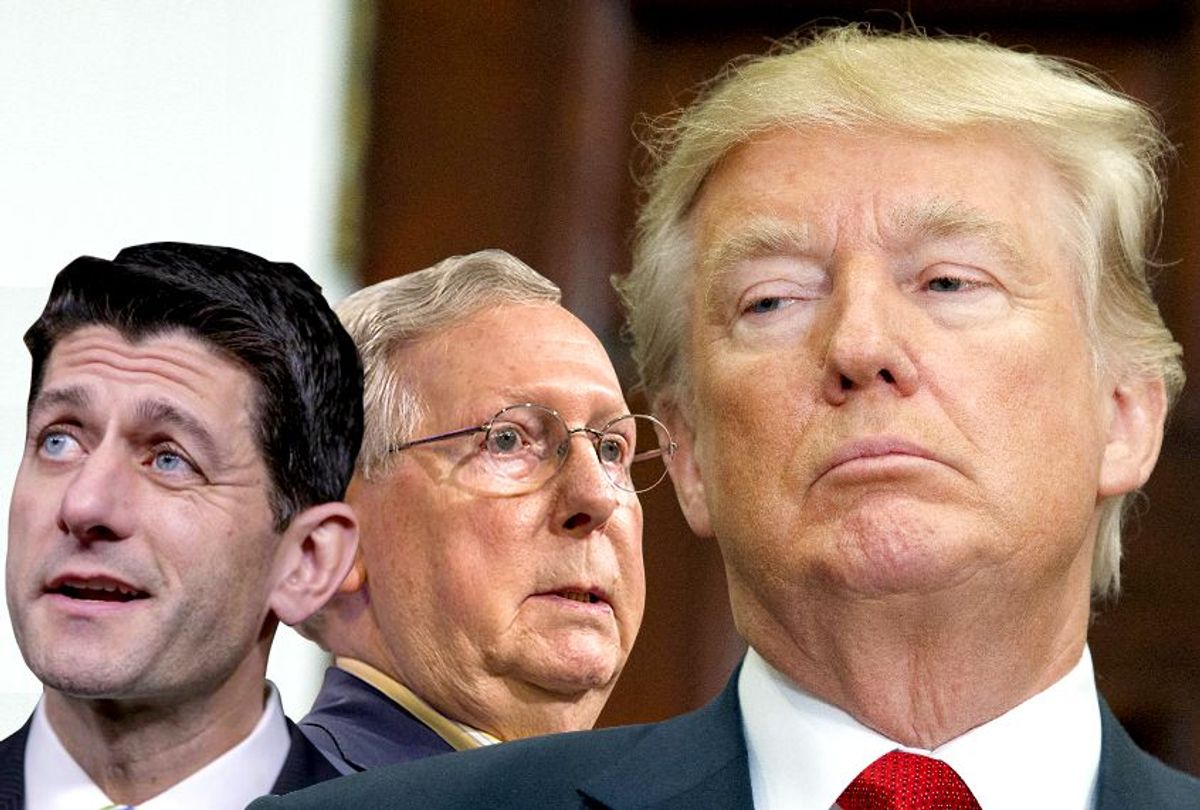 The empire has struck back. It almost always does.

Fiscal policy is not race-neutral. It prioritizes certain groups and interests while punishing and disadvantaging others. The Republican Party's new "tax reform" bill is no different.

This legislation takes hundreds of billions of dollars away from poor and working-class Americans and gives it to the (already) very rich. As I have suggested in an earlier essay, the Republican tax bill has no redeeming social value. It can be understood as a Malthusian effort to kill off the "useless eaters," with the goal of creating a social-Darwinist dystopia where the amount of money a person has is taken as the ultimate indicator of human worth. On the surface, the Republican tax plan is simply legal theft. But its deeper goal is to radically remake American society by undoing the changes made by the civil rights movement, the Great Society and the New Deal.

As it does in almost every area of American life, the color line plays a role here. The Republican Party is the United States' largest white identity organization. Movement conservatives and the right-wing more broadly use both white racial resentment and old-fashioned overt racism to win elections. Today's Republican Party actively works to undermine the freedom and equal rights of nonwhites. President Donald Trump is championed by white racial terrorists such as the Ku Klux Klan, neo-Nazis and other white racial reactionaries who have rallied to the banner of the "alt-right."

Most important still, the unifying vision of the Republican Party since at least the post-civil rights era has been to elevate and maintain the power of white people as a group (and "whiteness" as a cultural and political force).

The Republican tax bill reflects this bundle of interests, goals and desires in at least two ways.

The "tax reform" bill has a disproportionately negative impact on nonwhites (in addition to the disabled, women and those who live in large urban areas and "blue states"). This is a function of the way systemic inequality is created, reproduced and nurtured, both historically as well as in the present.

For example, it is estimated that whites have at least 10 times the wealth of black Americans (and 12 times that of Latinos). Some estimates of the racial wealth gap actually indicate that whites as a group have 69 times more wealth than blacks if ownership of a car is excluded from the calculations. Racial discrimination against nonwhites in the labor market is estimated to cost the United States economy at least $2 trillion a year in lost productivity.

The housing, banking and lending markets are also sites of racism and other types of discrimination against black and brown Americans. These outcomes rest upon a foundation in which black and brown Americans were subjected to centuries of land theft, slavery, ethnic cleansing, racial pogroms and other types of interpersonal and structural violence that stole wealth from them and gave it to whites -- including newly arrived immigrants from Europe.

These policies are the result of decisions by policymakers and other political and social elites. These disparate, unjust and anti-democratic outcomes are not accidental or random. They are a choice.

In America, wealth inequality has both a gender and a race. White people own 90 percent of America's wealth. Roughly 2 percent of black and Latino households are worth $1 million, while 15 percent of white households have a net worth of at least that much. In the United States, the proverbial "one percent," as measured by wealth and income, almost entirely consists of older white men.

Predictably, the Republican tax bill was largely crafted by white men of a certain economic class and political orientation to expand their political power and personally enrich themselves financially. Donald Trump is estimated to receive at least $1 billion in benefits because of proposed changes in the estate tax.

Dedrick Asante-Muhammad, an expert on race and economics who has worked with organizations such as the NAACP and Prosperity Now, discussed this with me by email:

The Republican "tax reform" bill is another significant step forward in concentrating wealth among the wealthiest and reinforcing the racial economic inequality which is and always has been the foundation of racial inequality. As the Inequality Charts from Urban Institute note, wealth is declining for the poorest Americans over the last 50 years and wealth is disproportionately going to the wealthy.

Whites will disproportionately benefit from the proposed changes to the tax code, Asante-Muhammad continues, largely because whites are so much wealthier: "Median white wealth, not including durable goods, is about $140,000 while African Americans have about $4,000 of [median] wealth and Latinos have about $6,000." About 90 percent of people wealthy enough to be affected by the current estate tax are white, although Asante-Muhammad adds the important qualifier that "most whites do not have the high level of assets required to benefit from a decrease in the estate tax."

Perhaps the biggest effect of the Republican tax proposal, he suggests, will be the creation of "a massive deficit that prevents the investment needed to have a broad, inclusive middle class" and that will require further reductions in social programs that benefit the working class and the poor.

The Republican "tax reform" bill is really the next step in a concerted effort to destroy the social safety net by eliminating programs such as Social Security, Medicare and Medicaid with the goal of giving more money to plutocrats and corporations. By using racist stereotypes against nonwhites, who are portrayed as "moochers" or "takers," conservatives will win support among many white Americans for this assault. The end goal of destroying the social safety net, and by extension gutting funding for the public sector as a whole, also has a disproportionately negative impact on nonwhites, who are over-represented in public sector jobs as well as in nursing and health care occupations.

It is also true that the Republican tax bill is one of the most unpopular pieces of legislation in modern American political history. As such, Democrats and others are hopeful that the harm done to hundreds of millions of Americans from losing their health insurance coverage, being unable to afford higher education or seeing the value of their homes decrease will create a backlash against the Republican Party at the polls. This is entirely too optimistic, as Asante-Muhammad warns:

After almost 40 years of a regressive economy I think we are seeing an increasing pessimism, particularly among whites, about future economic possibilities. The success of building a strong white American middle class that occurred during the mid-20th century is increasingly in danger of regressing. We already see that the slower middle-class economic growth for white Americans is causing a sense of outrage and demands to go back to a beloved time like the 1950s and '60s when the civil rights of all Americans were much less enforced, [and] also a time when white Americans saw record levels of economic progress.

Slower economic progress, he suggests, encouraged large numbers of whites to support the "regressive economics" of the Reagan era and thereafter. This damaged their own socioeconomic progress "but harms the growing communities of color even more. This sets up the country to become more politically and economically divided."

Voters are not rational. As shown in important new books such as "Democracy for Realists" and "Neither Liberal Nor Conservative," the (white) American voter is tribal, relatively unsophisticated and easily manipulated by emotion, symbolic politics and other calculations. Because of this, racial animus is extremely powerful in influencing white Americans to vote against their material self-interests and in favor of the "wages of whiteness" that come from feeling superior to nonwhites, especially black people.

Today's Republican Party, the broader right wing, their media and other leaders are masters of political sadism. They know that they can hurt white voters -- especially in red-state America -- and still win politically by doing so. How? By blaming black and brown people for the country's problems. The Republican Party and its allies will use the harm and pain caused by their tax reform plan to remain in power, in a variation of the white-supremacist "Southern Strategy" that has guided American conservatives since at least the 1960s.

The deeply unpopular, evil and destructive tax bill should be a noose that the Democrats can hang around the metaphorical neck of the Republican Party. But as they seem to almost always do, Republicans will likely be able to slip out of that death knot and put the Democrats on the gallows instead. Democrats will stand there gobsmacked, just as they did in 2016 when Trump won the White House, wondering how the hell all this could have happened.