Mars and moon missions sound cool, but it's part of the GOP's larger plan to destroy the agency as we know it 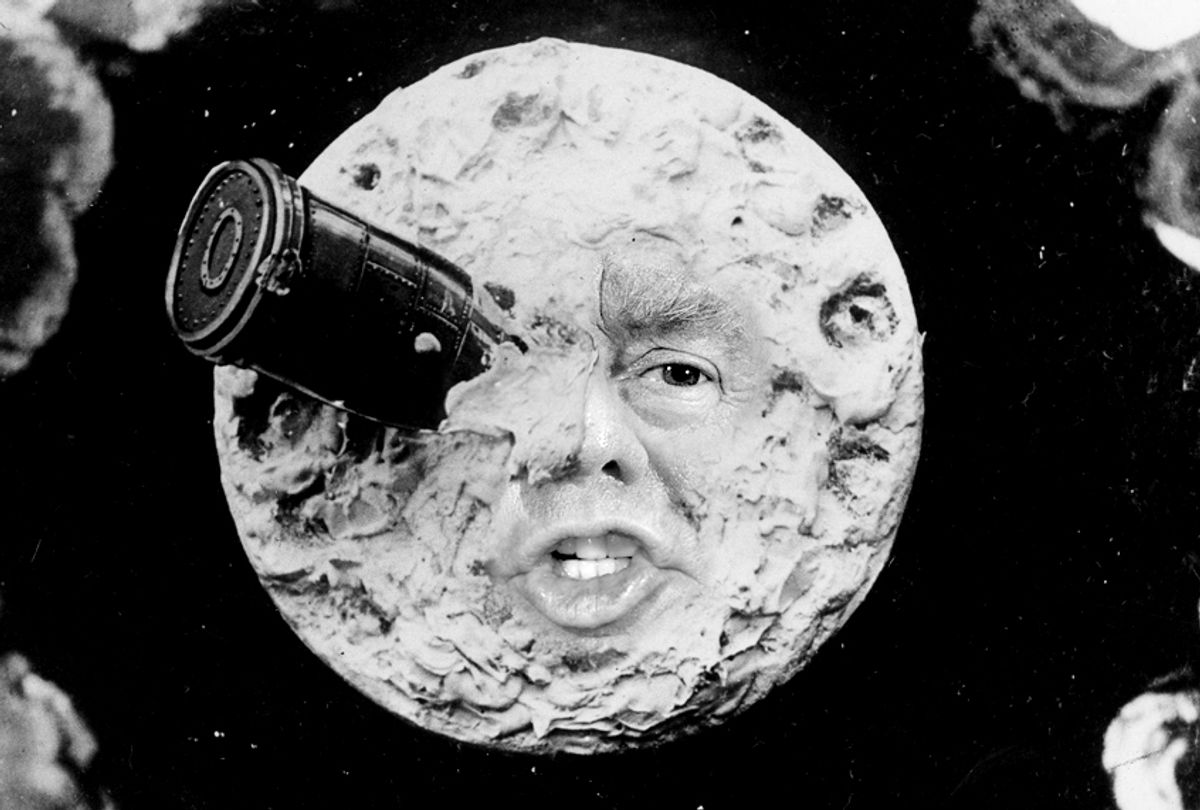 Two news items this week — the story of a weird asteroid dipping through our solar system, and the tale of Trump’s literal moonshot plan for NASA — weren’t merely items of space news floating through the newsiverse. These two space stories are connected in a way that prophesies something profound about America’s future in space.

First, some background: Oumuamua, a rogue asteroid likely to have originated from outside our solar system which swung around our sun in October, was found to have physical properties that were so bizarre that it prompted some scientists to focus radio telescopes on the rapidly departing rock to see if it might have been an artificial object constructed by an alien civilization. Of note: the group interested in testing Oumuamua for alien origins was largely privately-funded; billionaire Yuri Milner, himself a big donor to the nonprofit SETI (Search for Extraterrestrial Intelligence) Foundation, is behind the effort to track Oumuamua to see if it is alien-made.

The other story was yesterday’s big reveal from President Trump that he wanted to refocus NASA’s budget to “reach for the moon,” and, ultimately, Mars. The press release stated that the United States’ new goals were to “return United States astronauts to the Moon for long-term exploration and utilization” and to “pursue human exploration of Mars and the broader solar system.” Sounds cool enough on paper, but as usual, these goals come at the cost of others; namely, Trump used the moonshot goal to excuse himself for cancelling four science missions, most of which were related to studying climate change.

Together, these two tales tell a story about what the GOP wants NASA to be. While billionaires were funding the astronomy to probe Oumuamua in the radio spectrum, Trump and his administration were working behind the scenes to make NASA into a science-free organization.

It’s hard to ask a question like, “why does Trump want to go to the moon?” in this manner without sounding conspiratorial. Yet in the case of Trump and GOP space policy, it is not a stretch to say there is a conspiracy here, although we need not call Fox Mulder to be able to eke it out. In essence, the ostensible moon and Mars missions are going to make NASA into an agency that contracts private aerospace companies to build big rockets, while not actually doing much science (or rocket-building) themselves.

To understand NASA’s evolution, you have to know a little bit about space travel economics. There is a rule of thumb regarding robot missions and human missions: In general, robots can achieve the same amount of science as a manned mission could, at 1/100th or even 1/1000th the cost. Mars missions like the Curiosity rover attest to this: Sending a human to do the robot’s job would have cost billions more, mainly because you’d have to carry around the life support systems — food, water, oxygen, bedding, medical equipment — in addition to the rest of the scientific equipment.

Inasmuch as the idea of humans living on other planets is romantic (if you’re Ridley Scott directing “The Martian”) or terrifying (if you’re Ridley Scott directing “Aliens”), it’s not particularly practical from a scientific perspective. Our robots are really good at doing science; they don’t have to do things like sleep, breathe, eat or maintain psychological composure, all of which require far more resources than the robots need.

So then, why does Trump propose to send humans to Mars or the Moon at all? It’s not because Trump has a romantic, Sagan-esque fascination with the idea of us becoming a multi-planetary civilization. It’s just to give more money and private contracts to the makers of the massive rockets that will get us there.

In this sense, Trump’s space policy brief is actually a boon to another big Mars/moon mission advocate: Elon Musk, CEO of SpaceX. As it stands, SpaceX gets about half of its contracts from the federal government, often building big rockets to move supplies to and fro the space station or to send government satellites to orbit. Yet Musk is also renowned as a hypeman for manned space missions to other worlds. That makes sense financially for him: He is basically giving positive PR to the idea, which builds public support, which leads to more contracts for him to build big rockets. (I’ve often wondered if Musk’s greatest skill is not as an engineer or a CEO, but as a marketer.)

The aerospace industry is over the moon at the chance to send rockets over the moon. That’s because a rocket going to the Moon, or Mars, is WAY more expensive than a rocket to low-earth orbit. Even to send payloads to the Moon requires a rocket of an order of magnitude larger than one that sends supplies to the ISS; remember, the International Space Station is 254 miles above us, whereas the moon is around 240,000 miles off. That requires a far larger rocket than the little Falcons that SpaceX usually sends to low-earth orbit.

To be fair, the policy agenda of privatization of NASA’s rocket contracts is one essentially inherited from Barack Obama. And indeed, rocket-building companies like SpaceX, Blue Origin and Boeing stand to make billions from government contracts, and have since the space shuttle program was axed. Yet Trump and the GOP go beyond Obama’s agenda with their commitment to strip NASA of many of its science functions. That agenda was made pretty apparent earlier this year with their appointment of Rep. Jim Bridenstine, R.-Okla., to the position of NASA administrator. Though he is not yet confirmed, Bridenstine has raised $89,000 from the defense and aerospace industry over the course of his career in Congress, and was criticized in a recent confirmation hearing for his positions on climate change; he actually once asked Obama to apologize for spending money on climate change research. In that case, having billionaires privately fund astronomy efforts — such as what’s going on with Oumuamua —  should please Trump and Bridenstine.

There’s precedent for what is going on with NASA. Just look back to the George W. Bush administration, and how he remade the defense industry in the 2000s. Indeed, a hallmark of the Bush years was his efforts to transform the military into a network of private contractors who were less accountable than the military itself; consider mercenaries like the eternally mid-rebranding Blackwater who fight alongside troops, or the outsourcing of Iraq-rebuilding efforts to Halliburton. Obama largely continued the military policies that Bush set. Now, those contractors are so deeply embedded in the Defense Department, so constantly lobbying to keep or increase their slice of the pie, that they’re essentially unremovable. They’re a cancer that keeps growing and that profits from being unaccountable.

NASA could soon become similar. Trump’s moon and Mars missions are going to be great for the aerospace industry’s ticker symbols, but not so good for science. Indeed, basic astronomy, SETI efforts and climate change research may become funded by billionaire donors, rather than supported by the government as a matter of public interest. But the Trump administration never much liked science anyway; this Brave New NASA is going to be virtually science-free if Trump and Pence get their way.