The new hobby of the super-rich: Hunting aliens

The quest to find alien radio signals is largely funded by billionaires. Is that a good idea? 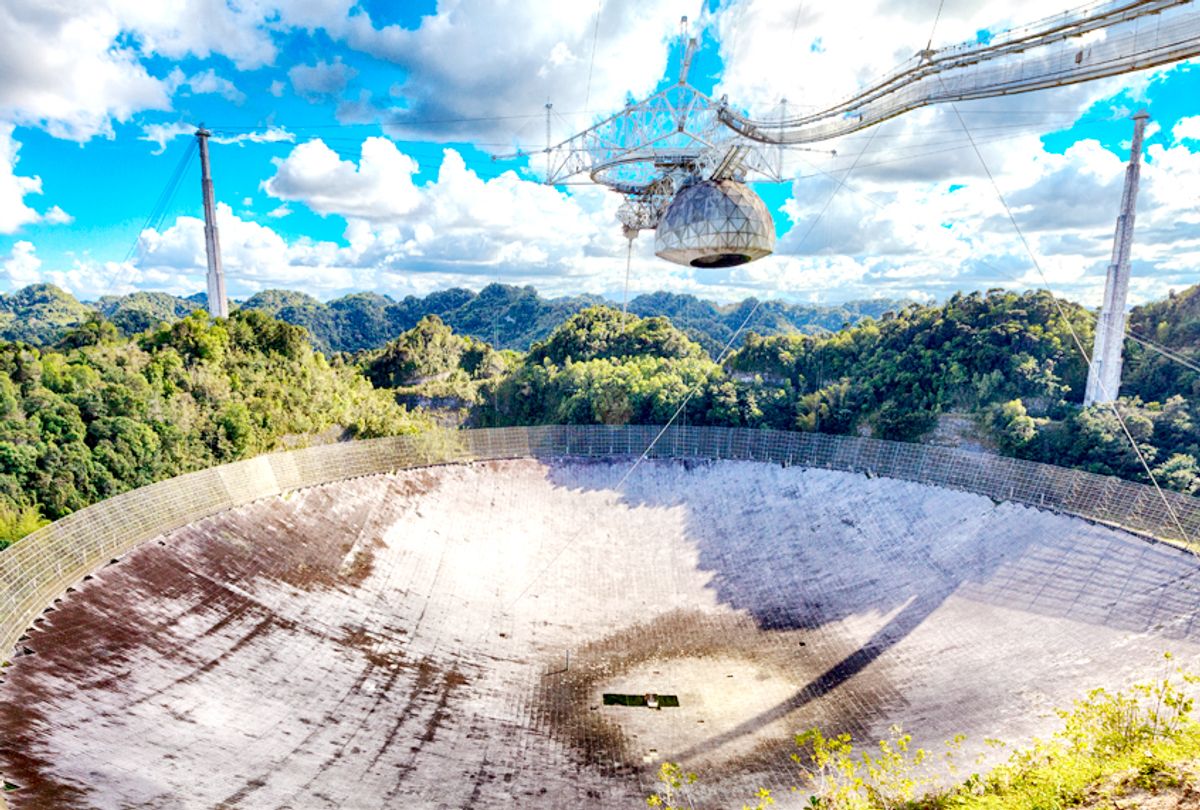 In the robber-baron era, the pinnacle status symbol for the super-rich was having one’s name on a library or a university, à la Andrew Carnegie, John D. Rockefeller or Andrew W. Mellon. Nowadays, that status symbol — at least for a certain segment of the Silicon Valley elite — is a radio telescope. The SETI Institute, SETI being an acronym for “Search for Extraterrestrial Intelligence,” is the premier international organization tasked with scouring the skies for potential signals from alien civilizations. Currently, the SETI Institute is funded largely by individual donors — and the list of major donors reads like a who’s who of tech wealth. Among the SETI Institute’s biggest contributors: billionaire luminaries like the late William Hewlett and David Packard, namesakes for the Hewlett-Packard Corporation; Gordon Moore, co-founder of Intel; Paul Allen, Microsoft co-founder; and Yuri Milner, the Russian-born venture capitalist with his fingers in many of Silicon Valley’s pies. Aside from all being billionaires, all of the aforementioned work or worked in tech in some capacity.

The search for E.T. wasn’t always a private venture. When astronomers first realized that radio waves could be used for interstellar communication, many governments and academic researchers became interested in the prospect of looking for alien signals. After all, searching for radio waves is a relatively inexpensive and easy process; you just aim your radio telescopes at the sky and listen. Frank Drake, now a professor emeritus of astronomy at the University of California, Santa Cruz, initiated the first SETI search when, in 1960, he aimed an antenna at the National Radio Astronomy Observatory at two nearby stars.

For a while, the federal government, via NASA, was funding efforts to listen for potential signals from extraterrestrials. Yet in 1993, Nevada Senator Richard Bryan slipped an amendment into a NASA appropriations bill that stripped NASA's SETI efforts of any funding, despite their minuscule costs compared to NASA’s budget overall. The most extensive search for extraterrestrial intelligence efforts moved to a privately funded, donation-based model; thus, the nonprofit SETI Institute was born.

It is not a coincidence that the privatization of the search for extraterrestrial intelligence happened at the same Clintonian moment that Western economies were adopting neoliberal economic reforms — selling off wide swaths of the social welfare state to private interests, contracting out others, and relying on private foundations to fulfill duties that had previously been the domain of government: things like providing housing, food and shelter for citizens; grants for postsecondary education; funding the arts and sciences, and so on. “The era of big government is over,” President Clinton declared in his 1996 State of the Union address, borrowing a slur (“big government”) that the right had invented to try to poison the notion that any form of government might be anything but bloated and intractable.

“Neoliberalism is a global system of minority power, plunder of nations and despoilment of the environment… a hegemonic system of enhanced exploitation of the majority,” wrote Alfredo Saad-Filho and Deborah Johnston in “Neoliberalism: A Critical Reader.” To the extent that neoliberal policies grant “minority power” to a small group of elites, neoliberalism is essentially a soft form of authoritarianism, in that said policies take democratic state apparatuses and put them in private hands, or assign them to unassailable technocrats. This is perhaps why the tech industry, with its oft-satirized tendency to compress all social issues into oversimplified “problems” and “solutions,” fits so well with the neoliberal mindset: the whole Silicon Valley ethos is to let the techie experts apply their hacks and fixes to everyday life, on their own monetized terms.

What does all of this talk of neoliberalism have to do with aliens? As it turns out, the story of SETI and the SETI Institute is really a story of economics, specifically of neoliberalism. For not only is the search for E.T. in private hands, but those who believe in its mission, and those who seek aliens, have bestowed them with strange properties that reflect more the era we live in than they do reflect any “universal,” cosmic principles of sociology.

Take a look around Silicon Valley, and you'll find all kinds technologists who are convinced they have a pretty good idea of what aliens will be like once we meet them. In 2015, a group of scientists and CEOs, including Elon Musk, signed a warning letter against theoretical attempts to message extraterrestrials; in it, they wrote of their worry that "because we have just recently (in cosmic terms) attained an interstellar communications capability, it is likely that other communicative civilizations we encounter will be millions of years more advanced than us." Projections as to aliens' intentions appear in the pages of prestigious scientific journals, too, including Nature, which published an editorial in 2006 regarding their fear that an alien receiving a human message might "reveal some peculiar flaw in our psychological make-up that alien 'black-ops' specialists might start working out ways to exploit." Hey, that sounds kind of like the plot of "Half-Life."

George Basalla, an historian who has written extensively about the history of SETI, believes that SETI’s die-hard believers are more akin to religious adherents than scientists. He cites the ways in which SETI scientists are unable to avoid transposing human civilization, culture and mores onto theoretical aliens, a sin that clouds their ability to search for E.T. in the first place. “Despite the efforts of SETI scientists to avoid the pitfalls of anthropomorphism, they duplicate terrestrial life and civilization on distant planets, creating a succession of alien worlds that mirror their own,” Basalla writes. He continues: “SETI investigators tend to transfer terrestrial life and culture to the rest of the universe because they operate beyond the limits of their knowledge and competence when they discuss the universality of science and mathematics, biological and cultural evolution, the idea of progress, the nature of technology, and the meaning of civilization.”

The transitive property of hubris

The hubris of the scientists who transpose human culture, civilization, beliefs and biology onto their search for extraterrestrial intelligence has a strange mirror in the Silicon Valley billionaires who donate to the effort. Anyone who has spent time in Silicon Valley is aware of the conceit of the elite technocracy that governs the valley, with their pseudo-authoritarian belief in creating a democracy-free society run, managed and operated by technocrats. And while the tech elites' private foundations — from the Bill and Melinda Gates Foundation to the Chan-Zuckerberg Initiative — speak to this goal to remake the world on their own, unaccountable terms, occasionally someone actually says this aloud, such as when venture capitalist and PayPal cofounder Peter Thiel wrote, “I no longer think that freedom and democracy are compatible.”

Let's call it STEM chauvinism, perhaps. It's a tendency that is quite perceptible in the business decisions of the tech world. Observe: Facebook’s transformation to a sort of pseudo-nation state, and its public assurances that it will do its best to keep the integrity of our democracies intact, which, as Max Read astutely noted, is terrifying to hear coming from a corporation. Or the dystopian-named Soylent, a food substitute powder designed to fix the "problem" of eating by eliminating the pleasures of food entirely; or in the desperate competition among the largest tech companies to automate cars and thus do away with all human drivers; or in the saga of the much-maligned “Bodega,” a startup attempting to automate and do away with human-run corner stores… I could go on. In any case, the bizarre cult of Silicon Valley believes deeply that they are the smartest guys in the room, and that the world should be run by their rules.

This kind of mindset trickles down to Silicon Valley’s philanthropy efforts, which are often informed by techno-utopian fantasies about how the world operates. Facebook CEO Mark Zuckerberg once had the hubris to believe that he alone knew how to fix Newark’s public schools, despite having no education background; Zuckerberg donated $100 million to the effort with no results to show for it. So much for the rule of the technocrats.

So back to SETI and the SETI Institute. All billionaires eventually reach a point where their money no longer buys them power or happiness; many billionaires then turn to philanthropy to further cushion their legacy and ego — for while no one can achieve practical immortality, endowing a library, university, or building is about the closest we can come to having our name stick around for forever.

The next step for the super-rich technocrats, then, is to have one’s name on what may be the most important single event in human history: the quest to affirm that we’re not alone in the universe. Currently, much of the SETI Institute’s infrastructure is named for and by its donors: there’s the Allen Telescope Array, named for Paul Allen; and Yuri Milner’s Breakthrough Prize Foundation, his $100 million endowment toward SETI projects. If a signal is actually discovered by virtue of one of these efforts, the billionaire donor will undoubtedly become an icon of sorts for the next thousand years — all for having the privilege of spending money he made off others’ labor to pay other people to build a telescope (or fund a grant program) with his name on it.

In an era in which our culture obsesses over the lives and beliefs of CEOs and billionaires, and many look to them as our saviors, it seems unwise to further our adulation. After all, we got into our Trumpian political mess by believing that those who are rich are smart, and vice versa — yet the rich’s real talents tend to be avoiding taxation and lobbying politicians to do things to increase their profits.

Regardless of whether or not you think alien signals are around the corner or not, the privatization of the SETI Institute is a sad reflection of the tendency of institutions that act in the public interest to be brought to the realm of the private donor. For now, the SETI Institute lives on the intersection of a Venn diagram: one circle reads "the hubris of the technorati," the other circle "our economic moment." If there are aliens out there reading, I apologize in advance for the weirdos who run our strange planet.