What's at stake if we lose net neutrality? A guide for the perplexed

Tomorrow is the day the FCC commissioners vote on whether to scrap net neutrality rules. What does that mean? 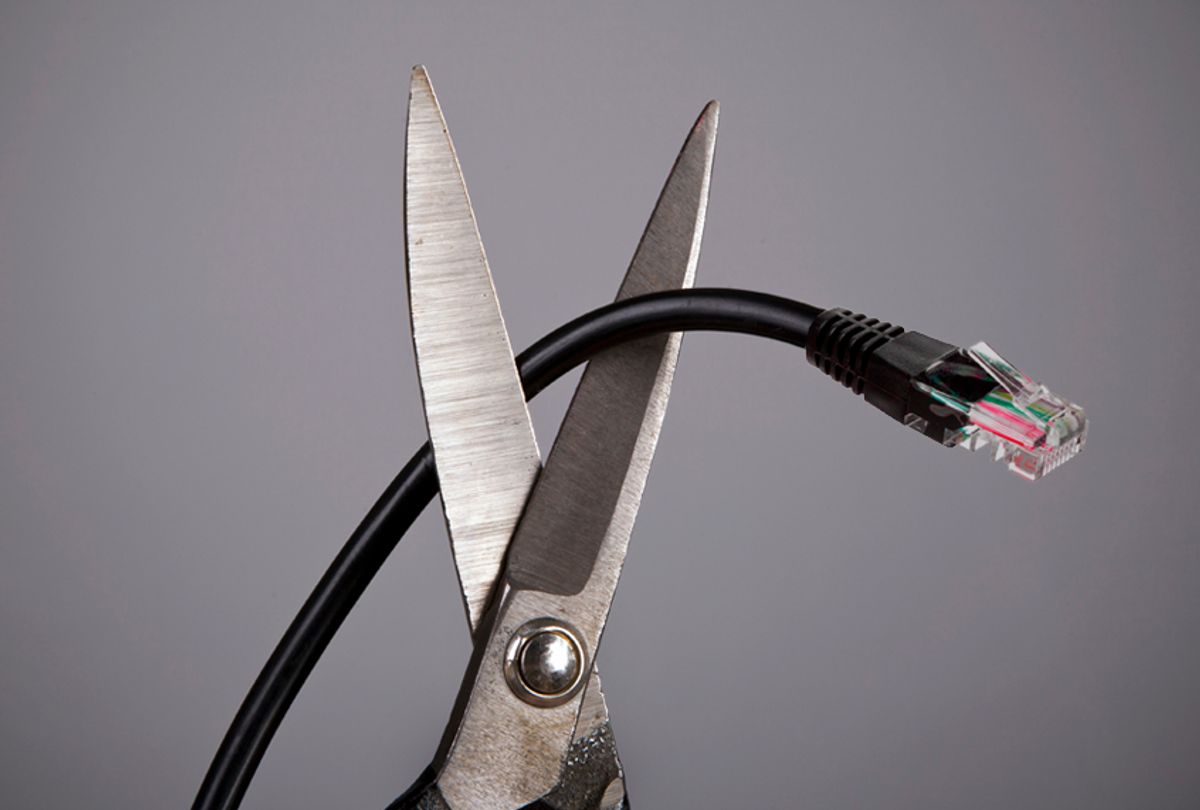 Update, Dec. 14, 1:30pm ET/10:30am PT: The FCC voted to end net neutrality rules, 3-2 vote along party lines. The decision may end up reaching a final decision in the courts though, and many Internet advocacy organizations are already petitioning to stop it.

On December 14, the Federal Communications Commission (FCC) will vote to keep or eliminate net neutrality rules — and if net neutrality is discarded, their decision could potentially turn the American Internet into an oligarchy, controlled and mediated by a few large corporations. The unraveling of these rules, which were established in 2015 under the Obama administration, is a partisan issue to be sure — nearly all Democrats are pro–net neutrality, and the charge to end net neutrality is spearheaded by a few Republicans like FCC chairman Ajit Pai and President Donald Trump — yet its impact will affect all American internet users regardless of political persuasion. For the record, that's most of the country: only 13 percent of Americans don't use the internet.

If you didn’t follow the debate leading up to the implementation of the rules in 2015, you might be more confused about why everyone is freaking out about Thursday's vote; or, perhaps, what the impact on consumers will be if the overturn is passed, which is likely considering the party split of the commission. Here, we’ve put together a Salon explainer guide.

First, what is net neutrality?

“Net neutrality is the rules of the road that are designed to keep a level playing field between Internet service providers (ISPs) and other players in the broadband space,” Amber McKinney, Assistant Managing Editor at the legal publication Law360, and who covers telecommunications, explained to Salon.

Currently, the U.S. has 62 ISPs, including big names like AT&T Wireless, Sprint, T-Mobile, Xfinity (a Comcast product) and U.S. Cellular.

Why is this happening now?

In 2014, Obama passed an order that classified the Internet as a Title II entity under the Communications Acts, which ultimately established restrictions for Internet providers that inhibited them from blocking content, accessing content, and throttling Internet content — which is when ISPs intentionally slow (or speed) a specific Internet service. As Obama explained during the initial debate a few years ago, “no service should be stuck in a 'slow lane' because it does not pay a fee.”

According to McKinney, there were several instances in which ISPs took advantage of an Internet without net neutrality rules, which is what helped pave the way for Obama’s net neutrality rules. In 2007, Jon Hart of California, sued Comcast for allegedly blocking him from using the peer-to-peer application BitTorrent. In 2012, AT&T limited the use of Apple’s Facetime feature on their phones, in an attempt to save bandwidth.

However, after President Donald Trump took office in January, he appointed Ajit Pai as the chairman of the FCC. Pai was already a commissioner at the FCC, having been nominated by Barack Obama in a recommendation from Sen. Mitch McConnell, R.-Ky. The FCC is always comprised of five commissioners, and no more than three can belong to a party—as it stands, three, including Pai, are Republicans.

Since Pai has become Chairman, he’s made it the FCC’s priority to reverse Obama’s net neutrality rules. In his proposal, net neutrality regulations would essentially become obsolete.

When Pai announced the new order, he claimed that Obama’s order forced the government to micromanage the Internet.

“We propose to repeal utility-style regulation of the Internet. We propose to return to the Clinton-era light-touch framework that has proven to be successful. And we propose to put technologists and engineers, rather than lawyers and accountants, at the center of the online world,” Pai said in a statement about the rollback.

He also pointed to small ISPs, and their inability to grow due to Obama’s net neutrality rules.

“Small ISPs faced new regulatory burdens associated with common carrier compliance. Innovative providers hoping to offer their customers new, even free services had to fear a Washington bureaucracy that might disapprove and take enforcement action against them. With the possibility of broadband rate regulation looming on the horizon, companies investing in next-generation networks hesitated to build or expand networks, unsure of whether the government would let them compete in the free market,” he said.

Since then, Internet pioneers and Democratic Senators have publicly asked Pai to delay the vote. A Republican, Mike Coffman, R-Colo., also asked Pai to delay the vote. The request to delay the vote isn’t only motivated by irreconcilable party differences, it’s also because of a debacle regarding the FCC comments section on the matter. When Pai announced his plan to reverse Obama’s net neutrality rules, he said the FCC would accept and consider comments on the matter; yet the FCC comment page ended up being trolled by bot accounts that spammed the page. In fact, according to a Pew Research Center study, fifty-seven percent of publicly-posted comments on the FCC's website came from temporary or duplicate emails.

In an open letter penned by Apple’s co-founder Steve Wozniak; Tim Berners-Lee, the inventor of the World Wide Web; Vinton G. Cerf, whose nickname is the “father of the Internet,” and more, it was revealed the the FCC has neglected to acknowledge Freedom of Information Act requests related to the fake comments.

A twinge of hypocrisy

What’s a political debate without a little hypocrisy? Congressman Coffman, R-Colorado, wrote a letter to Pai in which he pointed out how Pai's previous words contradict his current stance.

“As you stated in your dissent to the previous FCC’s open Internet proceeding, ‘A dispute this fundamental is not for us, five unelected individuals, to decide. Instead, it should be resolved by the people’s elected representatives, those who choose the direction of the government—and those whom the American people can hold accountable for that choice.’”

Yet, here we are.

As the hours countdown to Thursday’s vote, there’s no end in sight to suggest that the vote will be delayed or the overturn won’t pass, which means consumers should begin to mentally prepare for an Internet without net neutrality regulations. According to McKinney, like anything, changes would be implemented at a slow pace, and there’s no way to truly predict what they would look like, but many are pointing to Portugal as an model of the types of tiered-Internet packages ISPs would offer.

For example, an ISP could charge $25 for a basic Internet access, and then ISPs could add extra charges for additional services like streaming video or using social media. It’s unclear if American consumers would stand for that, but the rollback would give ISPs an opportunity to experiment.

The other potential implication is what ISPs will do to companies who get a lot of traffic, or have features that require a lot of bandwidth. McKinney told Salon that one way to think about this is to look to Ikea, a furniture retail company that gets a lot of traffic. “Let’s say Ikea has a VR component to see what a piece of furniture would look like in your living room, but that feature takes up a lot of bandwidth,” she says. “The ISP might charge more for that feature, and Ikea could say that’s not worth it to us, and they’d take it off their website.”

Moreover, this vote also comes at a moment when the news industry faces a crisis of public faith, largely as a result of attacks on the news industry's credibility from the president and his allies.  If the net neutrality rules are overturned, McKinney tells Salon it could have an impact on news sites as well.

“An Internet service provider, say Comcast that also owns NBCUniversal Media, could decide to provide content from NBC on a ‘fast lane,’ meaning stories and video clips load quickly, while throttling the same type of content from a competitor's news site, making that media load more slowly,” she told Salon. “It remains unclear how much the Federal Trade Commission will be able to police these kinds of arrangements, and whether the scenario above with two related companies will be treated differently for enforcement purposes from a situation where one media outlet simply pays Comcast or another ISP a higher rate to make sure their content is provided on one of the internet fast lanes.”

Even though the vote doesn’t hinge on citizen voters, a recent poll by Politico and Morning Consult has found that 52 percent of voters are in favor of Obama’s net neutrality regulations, including 53 percent of Republicans and 55 percent of Democrats. Likewise, a University of Maryland poll, quoted in the Washington Post yesterday, noted that "large majorities of Americans — including 3 out of 4 Republicans — oppose the government's plan to repeal its net neutrality rules for Internet providers."