A party founded by former Nazis forms a government in Austria

The Freedom Party, founded by ex-Nazis, announced a coalition government with a conservative party in Austria 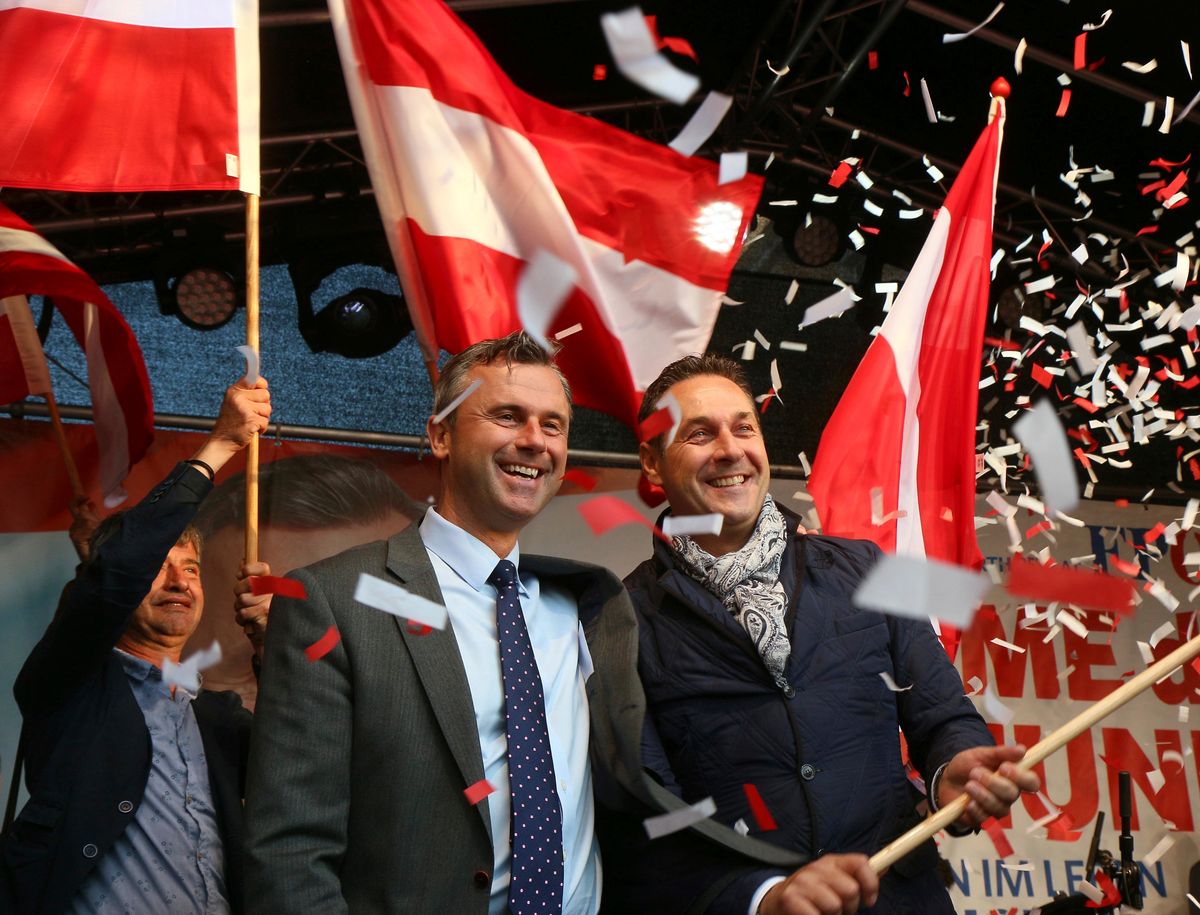 FILE - In this May 20, 2016 file photo Norbert Hofer candidate for presidential elections of Austria's Freedom Party, FPOE, and Heinz-Christian Strache, from left, head of Austria's Freedom Party, FPOE, look out at supporters during the final election campaign event in Vienna. Austrians are choosing Sunday, Dec. 4, 2016 between a moderate and a populist for president _ and both candidates are hoping to exploit the Trump effect in the first European Union nation facing such a choice since the U.S election. (AP Photo/Ronald Zak, file) (AP)
--

Putting a capstone on a year in which currents of jingoism and xenophobia swept across the Western world, the far-right Austrian Freedom Party — founded by former Nazis — joined hands with the conservative People’s Party to form a coalition government in Austria. The move makes the mountainous republic unique among European countries for having a government that granted significant federal power to a xenophobic, far-right anti-immigrant party.

As a country with a parliamentary system, Austrian members of parliament (MPs) are voted in and then later form governing coalitions via their parties; said coalitions which often dictate how the parties split up federal appointments. The coalition deal between the People’s Party and the Freedom Party means that the far-right Freedom Party will “will take control of much of Austria’s security apparatus as the deal puts it in charge of the foreign, interior and defense ministries,” whereas the conservative People’s Party “will control the Finance Ministry as well the justice and agriculture portfolios,” as reported by Reuters.

The Freedom Party’s ability to manage the security apparatus and the interior ministries allow them for full expression of their perfervid anti-immigrant politics. Freedom Party MP Heinz-Christian Strache, currently Austria’s vice-chancellor, has a history of using colorful campaign slogans that vilify immigrants, Muslims, and those that don’t speak German, while glorifying militaristic and imperialist symbols of Austria. “We don’t want an Islamization of Europe… We don’t want our Christian-Western culture to perish,” Strache once said. Horrifyingly, the New York Times reported that Strache had “participat[ed] in neo-Nazi activities as a youth.”

In October, in the wake of the Austrian election, the World Jewish Congress “called the Austrian election results ‘distressing,'" and warned that the Freedom Party “is still full of xenophobes and racists and is, mildly put, very ambiguous toward Austria’s Nazi past,” according to the Times. At the time, the World Jewish Congress warned the conservative People’s Party against forming a coalition government with the Freedom Party, advice that the People’s Party did not heed.

While the Freedom Party’s politics have echoes of Trump’s alt-right coalition — as well as Nigel Farage and Marine Le Pen’s euroskepticist and xenophobic politics — the Austrian party is perhaps more extreme than any of them, particularly given Mr. Strache’s openly neo-Nazi past, and the fact that the party was actually founded by former Nazis in the 1950s. Yet the alliance between the traditionally conservative People’s Party and the far-right, anti-immigrant Freedom Party also calls to mind American politics, where Trump-style xenophobic nationalism has forged a political alliance of sorts with Republicans who fancy more "traditional" neoconservatism. For all the bloviating within the GOP regarding Trump’s behavior and discourse being an affront to the party, even “resistance” Republicans like Jeff Flake and John McCain nearly always vote with Trump, showing that the Right's policy positions are generally the same even if their ideological boundaries vary.