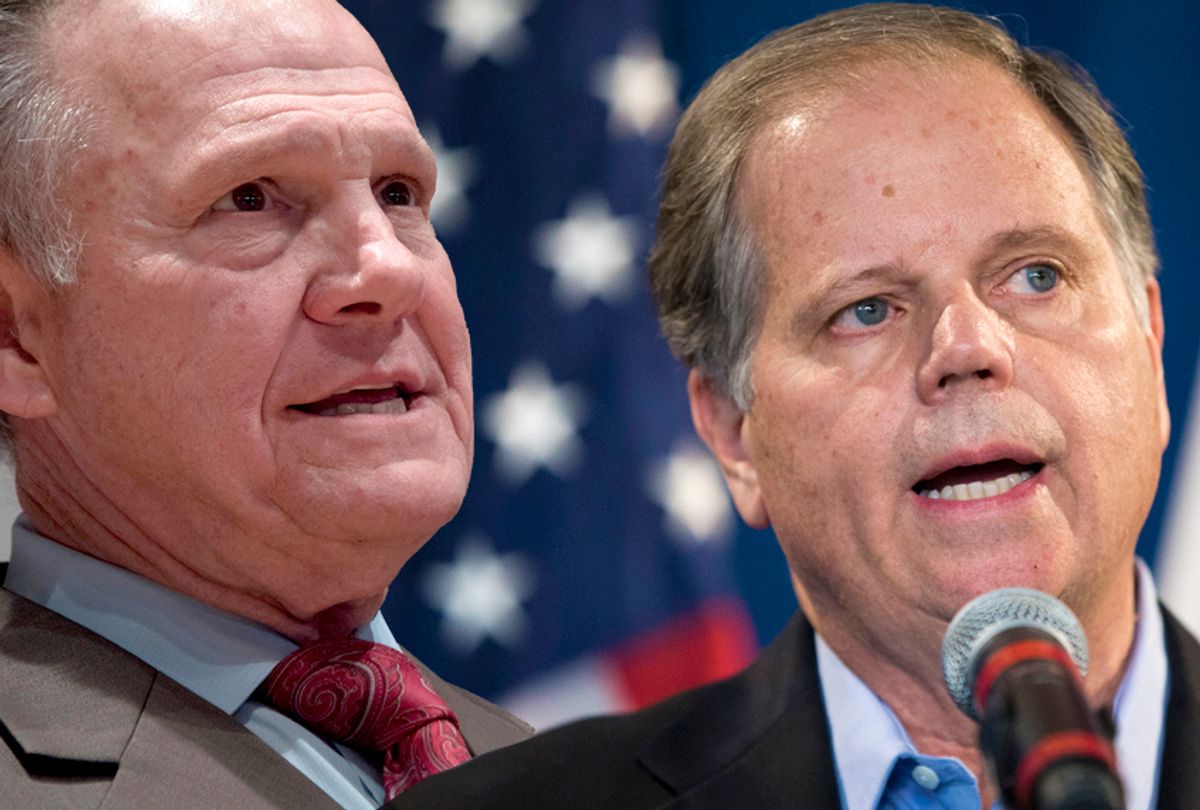 Hard to believe, but four days after Doug Jones beat Roy Moore for Senate in Alabama, it’s already time to take a step back and ask ourselves what really happened down there.

Watching the returns on MSNBC on Tuesday night, you’d have thought they were covering a vote in the House to impeach Donald Trump. There on the right side of the screen was Steve Kornacki in his trademark rolled-up sleeves, bristling with wonky expertise, gleefully tracking vote totals in red counties that were turning pinkish… and then BLUE! Yet another surprising twist in the night’s narrative! There goes Madison County, up in the north! Jones picks up the Huntsville vote! And on the left side of the screen, Joy Reid and Rachel Maddow were grinning like they were watching Harvey Weinstein and Donald Trump get handcuffed together and pushed into the back of a squad car.

It was a big win on Tuesday night, for sure. A tomato-red state like Alabama electing a Democrat to anything is one for the record books, eclipsing the big wins in November in Virginia by far. But how excited should we be?

Marginally. There are factors that throw some shade on the win in Alabama.

Just for starters, look who was running. To say the race was a one-off is putting it mildly. The Republicans of Alabama, bless their hearts, decided to put up an overtly racist theocrat against the man who as U.S. Attorney prosecuted and jailed two of the KKK members who bombed the 16th Street Baptist Church in Birmingham, killing four young girls -- and they did this in a state that is 27 percent African-American. Making a disgusting racist your candidate, even in Alabama, wasn’t a good strategy. Roy Moore, asked at a rally when America had been “great,” harkened back favorably to the days of slavery. “I think it was great at a time when families were united, even though we had slavery, they cared for one another," Moore said. "People were strong in the families. Our families were strong, our country had a direction, and we corrected many of the problems." He said this in the state of Alabama, where a large percentage of its population is descended from slaves, whose ancestors’ families were vulnerable to being separated from one another at the will of slave owners, or sold away from their families altogether.

Moore was quoted in a 2011 radio interview as believing that repealing every amendment to the Constitution after the 10th “would eliminate many problems.” The 13th Amendment abolished slavery. The 14th Amendment guaranteed blacks the right to vote. The 19th Amendment gave women the right to vote. “You know people don't understand how some of these amendments have completely tried to wreck the form of government that our forefathers intended,” Moore said.

“The form of government that our forefathers intended” included slavery in the state of Alabama, a fact that was notably not lost on its black citizens. In short, the Republican party couldn’t have found a candidate more disliked by the black population of Alabama, not to mention its decent white citizens, if they had exhumed George Wallace from the grave. Come to think of it, a cryogenically preserved Wallace would  probably have had a better chance than Moore against Jones, since by the time he died, Wallace had apologized for the racism of his past and enjoyed strong approval from black Alabamians.

As if Moore’s racism wasn’t enough, he conveniently turned out to be an alleged pedophile as well, having been accused by no less than nine women of either “dating” them as teenagers (when he was a 32-year-old man), or in two cases, sexually abusing a 14-year-old girl and sexually assaulting a 17-year-old. In a state where women make up a majority of the electorate (as they do in most states), mothers with children voted against Moore by 10 points -- 66 percent to 56 percent -- and women without children voted against him by the same margin -- 55 percent to 45 percent. Statewide, Jones carried the female vote 57 percent to 41 percent; 98 percent of black women voted against Moore.

That the Republican party hung itself with a candidate as eminently beatable as Roy Moore was the good news for Democrats, but it was the bad news as well. Pundits contended the day after the election that practically any Republican not currently behind bars in Alabama could have beaten Jones, including their sitting Senator, “Big” Luther Strange, who was tainted by yet another sex scandal in Alabama involving the recently deposed governor of the state, Robert Bentley, who was caught on tape telling his mistress what he was going to do to her atop the governor’s desk in the state capitol behind closed doors. But Republicans didn’t run Luther Strange, did they? They ran the worst senatorial candidate the Republicans have put up since the year they ran Todd “Legitimate Rape” Akin in Missouri and Christine “I Am Not a Witch” O’Donnell in Delaware.

With Steve Bannon threatening to run primary opponents against every Republican senator up for re-election in 2018 (with the exception of Ted Cruz), the question is how self-destructive Republican primary voters will turn out to be. The good news is that primary voters tend to come from the Looney Tunes wing of the party, and thus may be susceptible to Bannon’s candidates. The bad news is that you can’t count on all of the races for senate seats next year being against candidates as demonstrably unqualified and criminally culpable as Roy Moore. This year, the Democrats had the #metoo movement going for them in a race against an accused pedophile. That kind of lightning isn’t likely to strike twice, even with candidates as odious as Ted Cruz running next year.

The X-factor next year won’t be Roy Moore, it’ll be Donald Trump. Jones’ win on Tuesday night means Democrats won’t be able to tag their opponents as being from “the party of Roy Moore and Donald Trump.” Republicans will be saddled with Trumpism next year, but it’s uncertain how much of a handicap Trump will be, if he’ll be a handicap at all. The good news is that Democrats are energized, and momentum going into 2018 is theirs to lose.

The bad news is that Democrats have been energized and had the momentum going into elections against alleged sexual abusers before. Clinton v. Trump 2016 comes to mind.