Republicans: Their own worst enemies, as usual

Roy Moore's defeat reveals an uncomfortable truth for the GOP — in triumph, it begins to destroy itself 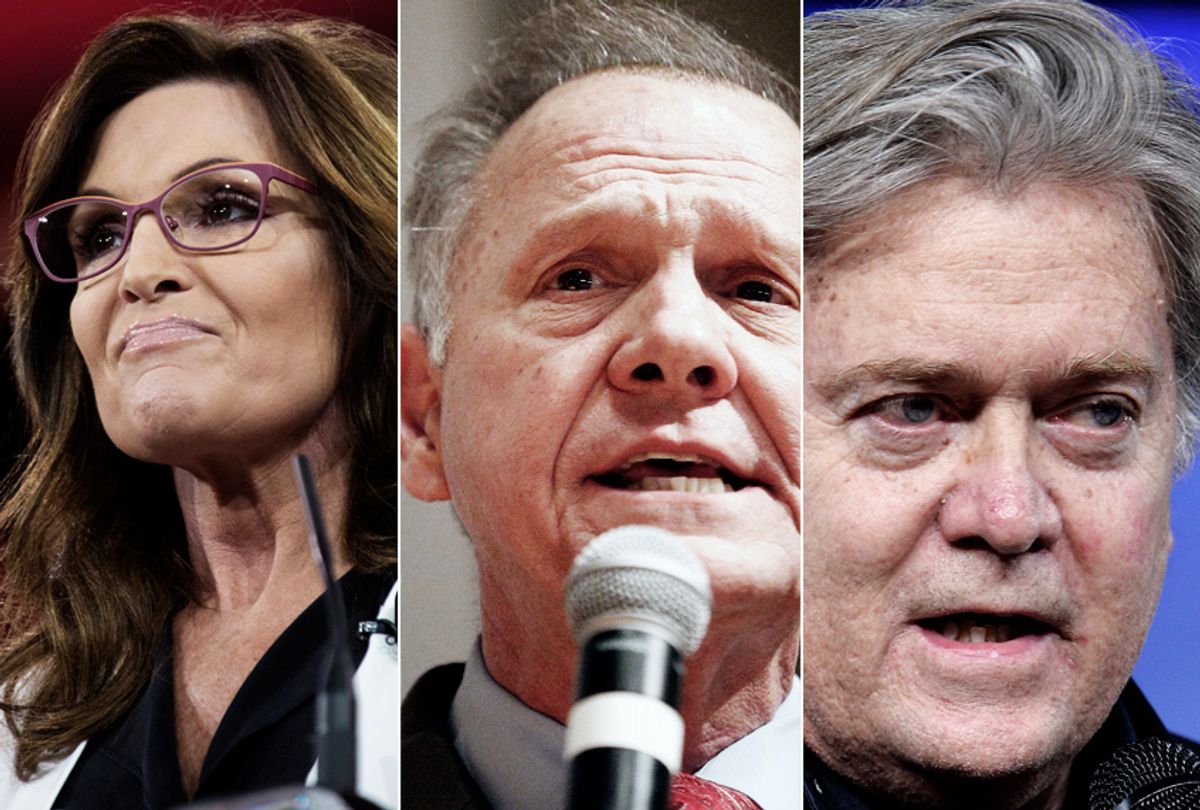 There is an important lesson to be learned from Roy Moore's defeat in the Alabama Senate race: Whatever Donald Trump's election meant, it wasn't that the Republican Party will survive if it continues to veer toward the far right.

The consensus view after Trump won, despite considerable research suggesting that Republicans need to moderate their message to be electorally viable, was the GOP could win elections by pandering to right-wing extremism and white nationalism. This was most likely an overreaction to the shock of Trump's upset victory, despite the inconvenient fact that he didn't win the popular vote and only triumphed in the Electoral College because of razor-thin margins in three swing states.

No, the consensus seemed to be that the famous warning in the GOP's postmortem from the 2012 election — you know, the part where the party acknowledged that it "needs to stop talking to itself" and had "lost the ability to be persuasive with, or welcoming to, those who do not agree with us on every issue" — could go the way of the dodo. Trump was elected president! And those pesky liberals never saw it coming (even though many of us did)! Right-wing "economic nationalism" is the wave of the future!

Smarter Republicans may now realize that Moore's defeat mean that the far-right are no likelier to work after 2016 than they were before.

Certainly we've had a number of opportunities to learn this when it came to Senate elections. Republicans may have reclaimed the House of Representatives in the 2010 midterm elections, but they squandered their opportunity to take the Senate by nominating a series of extremists in key Senate races — Christine O'Donnell in Delaware, Sharron Angle in Nevada, Linda McMahon in Connecticut, Ken Buck in Colorado. In 2012 they fouled up in two other contests they could have won by nominating Todd Akin in Missouri and Richard Mourdock in Indiana. Yes, the GOP has managed to squeak by with a slight Senate majority since the 2014 midterm elections, but its margin would almost certainly be larger now if it wasn't so prone to selecting nominees from the party's ideological fringes. After losing a seat in Alabama, the Republican majority is now just 51 seats.

The same thing can be said at the presidential level. It's tempting to look back at the pre-Trump Republican Party as a bastion of sanity now, but one must remember that the GOP has struggled to remain viable among moderate voters since Ronald Reagan left the White House. A Republican has only won the national popular once since 1988, and even that contest — George W. Bush's re-election in 2004 — involved one of the smallest margins ever received by a winning incumbent. By 2008, John McCain's decision to anoint Sarah Palin as his running mate immediately associated his ticket with the far right that he had studiously avoided up to that point; in 2012, Mitt Romney's inability to shake the perception that he cared only about his party's base of white super-rich conservatives doomed what could have been an easy victory.

This is what makes Steve Bannon's grandiose plot to take down the Republican "establishment" so absurd. The underlying assumption is that America is ultimately a deeply conservative country, one that will ultimately move far to the right so long as it isn't held back by timid pandering from GOP leaders. It's an argument that has a grand total of one case to prove its point — the election of Donald Trump, who won without a popular mandate due to the FBI's incompetence and Russian meddling — and it has failed to deliver results in the key 2017 elections from Virginia and New Jersey to Alabama.

If the far right has any hope of retaining national power, there is only one method that history suggests could actually work: Cheating. Setting aside the fact that the Trump campaign at the very least tried to collude with Russia in order to win the 2016 presidential election — actual collusion hasn't been proved, although it strains credulity that all those connections are purely coincidental — the GOP has benefited enormously from efforts that stifle or suppress the voices of those who would vote against them.

A voter ID law in Wisconsin, for example, managed to disenfranchise roughly 200,000 voters, most of them Democrats, in a state Trump won by less than 23,000 votes. Thanks to their gerrymandering of national congressional districts, the Republicans have had a lock on at least one house of Congress, even though they lost the popular vote in House races in 2012 and only won 52 percent of the popular vote in those races in 2014 (when they won 57 percent of House seats).

That's also the main reason why liberals shouldn't be too hopeful in the wake of Doug Jones' startling victory over Moore. As the last few years have demonstrated, Republicans are very good at cheating, and considering that African American voters were instrumental to Jones' victory, it stands to reason the GOP will double down on cheating in the future, to hold on to power. That said, the key lesson from the Moore election is the same one that has been demonstrated over and over again over the past quarter-century: America is not, and will never be, a nation of far-right voters. There is a small right-wing minority that has mastered the art of seizing power — not only nationally but within their own party, where there are stark divisions between extremists and moderates — through underhanded means.

Those on the Republican far-right hate immigrants, hate the LGBT community, hate African-Americans and other racial minorities, hate women and hate the poor. They live in a bizarro world where a few good guys with guns will destroy an evil big government that has nukes, as well as one in which a secretary of state who used a home-brew email server is more corrupt than a businessman who won't release his tax returns and has been compromised by a quasi-fascist foreign power.

They are the great villains of our era, and right now they're in charge because they have managed to subvert America's basic democratic structures. Our generation's crucible will be determining whether they'll be allowed to keep on getting away with it.