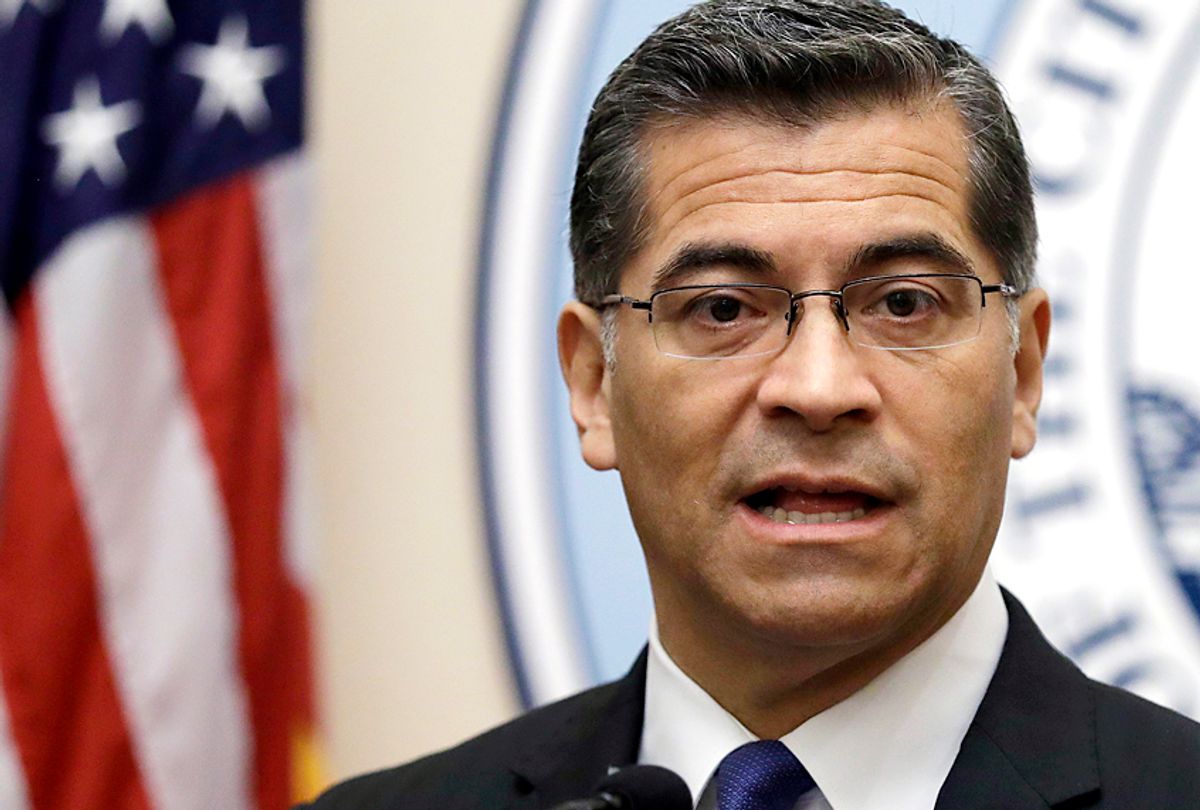 California can't save us from the Donald Trump apocalypse, but California Attorney General Xavier Becerra is determined to do whatever he can to reduce the damage. In the first year of Trump's presidency, Becerra racked up two dozen lawsuits against the administration for its attempts to roll back federal regulations protecting immigrants, service members, students, health care and the environment.

It's a staggering amount of work, on a broad scale, but perhaps the most extensive effort by Becerra's office is in the field of environmental protection. On Tuesday, his office filed what will likely be its last suit of 2017 against the Trump administration, demanding that the Bureau of Land Management enforce an Obama-era regulation requiring oil and gas drilling companies on federal lands to capture and use the methane released during drilling, instead of venting it into the air where it becomes a contributing factor in climate change.

“We believe the Trump Administration’s actions aren’t just wrong, they’re illegal," Becerra explained in an email statement to Salon. "No one is above the law. And no one should put protecting polluters ahead of protecting our planet or people. California didn’t get to be the sixth largest economy in the world by sitting back.”

The tension between the solidly blue states, such as California and New York, and Republicans in control of the federal government has been a major theme of 2017, culminating in a tax bill that is explicitly meant to punish people in those states. Republicans' evident desire to undermine the residents of liberal coastal states makes perfect sense. Becerra's actions show that states like California have both the power and the will to keep fighting against the GOP's agenda to put corporate profits ahead of people and the planet.

In President Trump's first year, his administration has done a staggering amount of damage to the environment. His retreat from the Paris Climate Accord is really just the tip of that rapidly melting iceberg. Trump appointed Rick Perry to head the Department of Energy, Scott Pruitt to the Environmental Protection Agency and Ryan Zinke to the Department of the Interior — three men who are so aggressively anti-environment that they could be considered pro-pollution. The three-headed dragon got busy trying to pump more toxins into our atmosphere, delaying and trying to repeal every clean air regulation they could find, particularly those written during the Obama years.

But Becerra has been able to win favorable court decisions -- or convince the Trump administration to give up rather than go to court -- in seven environmental cases so far.

In October, Nathanael Johnson at Grist declared Becerra to be the "planet's lawyer," arguing that California's attorney general, "not liberals in Congress, might be the best hope for progressives eager to slow down Trump’s assault on environmental and other protections."

Becerra isn't doing this all on his own, to be clear. The state legislature expanded his budget specifically so he could take on the Trump administration. While the decision is smart politics — it's unlikely that Trump is hated anywhere more than he is hated in California, where Hillary Clinton's vote margin exceeded her margin in the national popular vote — it's still important to understand this spending in a larger context. To wit, the rest of the country owes California taxpayers a huge debt of gratitude. The Golden State is taking its own taxpayer funds and putting them in service of protecting the rest of the country from the Trump administration's excesses.

Unfortunately, there is good reason to worry that hemming in Trump with lawsuits might rapidly decline in value as a strategy against the administration. Mitch McConnell's years-long plan to hold federal judicial seats open rather than allow Barack Obama's nominees to have hearings wasn't used just to steal a Supreme Court seat. McConnell employed this likely illegal and certainly illegitimate strategy for empty seats at all levels of the federal judiciary, and now Trump is rushing through nominees at a breakneck speed. Soon the courts will be packed with Trump loyalists, some of whom can't even pass an American Bar Association review, meaning that even the most stellar legal arguments against the administration will increasingly be heard by judges who care more about securing Republican power than following the law.

Still, Becerra's year as a thorn in Trump's side is a reminder that resistance matters, even if the bad guys win most of the battles. The administration, drunk on its desire to do whatever it takes to make liberals cry, is ready to return the United States to the days when the skies were gray from smog and people were literally afraid they would get ill if they left the house. Becerra has stymied those efforts significantly, which means a reprieve for millions of Americans who have respiratory problems exacerbated by air pollution — not to mention the thousands of children who are in danger of developing asthma if air quality declines again.

It's also a reminder that just because Democrats are out of power on a national level, voters in blue states aren't helpless. Becerra has been able to fight back hard because he has the support of California's voters and taxpayers. It's an important reminder, going into 2018, that everyone has a part to play if the United States is to survive this catastrophe.