The scariest animated Christmas special you haven’t seen (yet)

This Oscar winning short film is, by far, the scariest rendering of a "A Christmas Carol" you will ever see 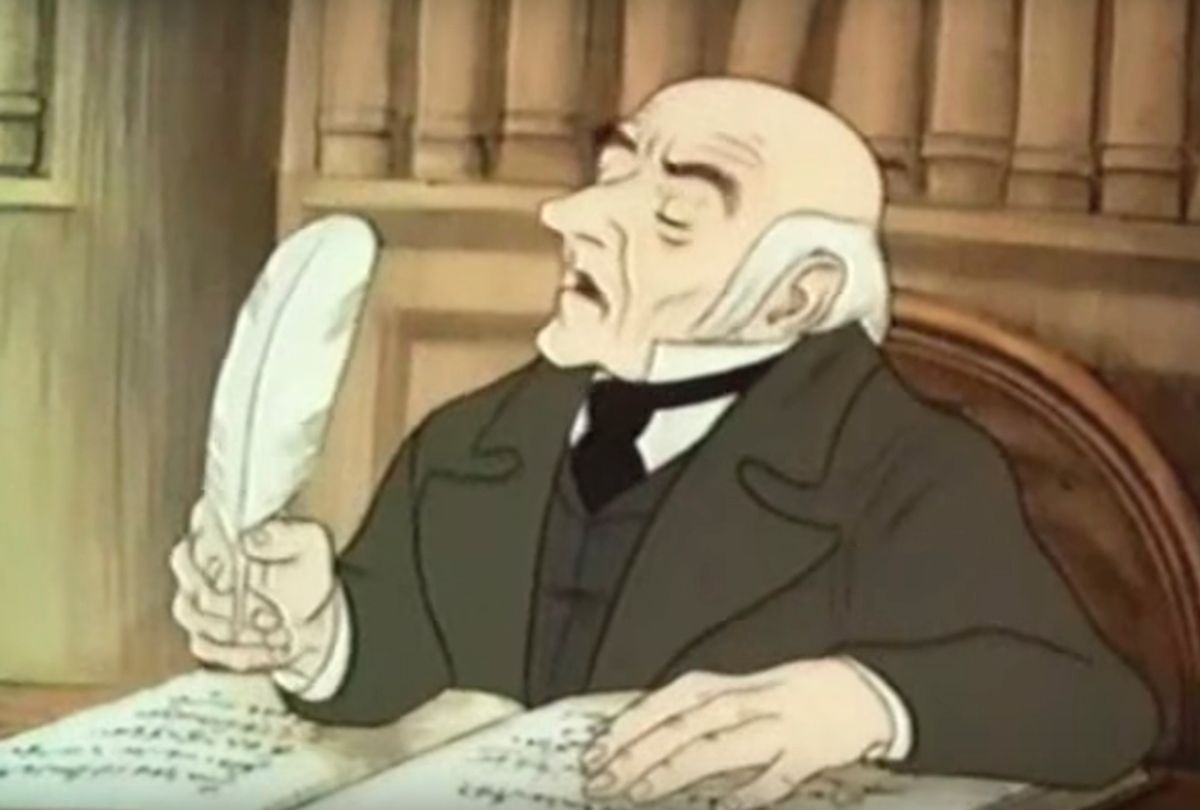 Being an imaginative people contending with shorter and shorter days and coming from a place where the spirits of the past always held sway, the English do something with Christmas that we Americans tend not to do. They use the holiday as an opportunity to amuse themselves, and stoke their senses of wonder, by scaring each other out of their minds with ghost stories.

Picture this: you are hanging out with your friends, the mulled wine is flowing, it is a Saturday, dark at 4:45 in the afternoon, and someone has an idea to see who can come up with the scariest story concerning the vapory dead. Fun, no?

Because of its trappings as family theater — that production you attend, yet again, come December, to keep the kids happy — we commonly view Charles Dickens’ "A Christmas Carol" as a largely benign holiday reminder — which we will almost certainly overlook — to not be horrible to your fellow human, to be good to yourself, to let the past be the past, to be present in your present, and know that the future can hold more love and meaning than what you’ve experienced to date. Dickens intended to frighten you — after all, ever try and confront your past and who you really are? — though most adapters of his novella aren’t focused on this themselves.

The most notable exception is the 1951 film version, "Scrooge," which I am now spending daily time with, having been contracted to write a book looking at it as a work of horror cinema.

This is the version with Alastair Sim, one that premiered, tellingly, on Halloween in this country, and was thought to be too frightful for American audiences that wanted copious amounts of red-fruited holly spread over their cinematic holiday repasts. The film is shot as though it were an example of German Expressionist terror, with Michael Hordern as a Jacob Marley who practically vomits ectoplasmic blood when Sim’s Scrooge dares to question his authenticity.

The film has come to be known as the definitive version of "A Christmas Carol" on screen, but even most fans of the movie — which has long played late at night, on random stations, as though it, too, were a ghost that couldn’t venture into the light of the afternoon — don’t know of its television offshoot, which was to follow twenty years later.

There are all kinds of animated versions of "A Christmas Carol." You almost surely know "Mickey’s Christmas Carol," with Scrooge McDuck essentially taking a spin in his own origin story long before he was swimming through mountains of coins in his money vault. (Who knows? Maybe before the bejeezus was scared out of him he merely walked those hills of gold grumpily.)

The animated versions of "A Christmas Carol," of course, are primarily intended for children, who may prefer softer edges for the minatory tablet Dickens was trying to stuff down their gullets. Let’s be clear about Dickens: he was a lot more like Kafka giggling to himself over having turned a dude into a bug than we ever think, a man who walked the streets of London late at night, laughing about how much like a puss-leaking dead body his Jacob Marley was and what a hoot it was to station Scrooge over his own grave. That onesie of yours, dear child, best have a diaper sewn into it.

None of the animated specials retain these Dickensian qualities, save one, which featured Sim and Hordern reprising their roles with animator Richard Williams — helped out by Ken Harris — as a kind of postscript, two decades on, to the cinematic genius of 1951’s "Scrooge."

A cartoony codicil after the fact to give you another jolt, lest you had become the recidivist version of a dire prick and forget those drenched-in-terror lessons of Sim and Hordern.

It’s not common to think of an animated work as having qualities like continuous long shots, but this 1971 cartoon effort opens with a single camera movement that is the animated analogue of what we see with the famous starting sequence of Orson Welles’s "Touch of Evil."

The camera starts its dizzying journey atop the clock face of Big Ben, before traveling down that structure, flipping over — and flipping out sensibilities of what will be possible already in this production — and traveling over the rooftops of smoky, clogged, huddled London, which manages to feel both a representative of the (then) modern metropolis and still an urban center not far removed from the older world of thatched roofs and plough horses. We are already in the past, present and future, when the camera passes through the window of a counting house, belonging to, well, you know who it belongs to.

The devil is so in these details. The soundtrack of the counting house scene is a ticking clock, as if counting down our very hours on earth. Sim’s Scrooge, more bored by the alms-seeking solicitors than angry — which feels more like an existential crisis for him — taps his finger as they talk. More drumming to mirror the steady beat of the clock. The human agency is now a part of a march to the grave in 2/2 time. Tick tock, tick tock, bastards.

At his house, Scrooge is entirely in darkness upon entering, something that just does not happen in animated TV programs any more than dead air is sought in radio broadcasts. From this darkness a faintly defined coffin becomes ever-so-slightly illuminated and ascends the stairs as if shot from the Reaper’s personal trebuchet. When we see Scrooge’s reaction, he is no longer a product of animation but rather the owner of a face that has regressed to simple black-and-white pen rendering. The color has literally left him. It is around this point that you think to yourself, “Wait . . . this is for kids? This is not for kids. Maybe some awfully brave kids. Maybe for the brave kid in me. Let us see what happens . . . ”

Hordern’s Marley turns up, and his exchange with Scrooge has to necessarily be sped along, since this particular holiday visitation is taking place, from life of sin to life of redemption, in about 25 minutes. To really put the screws to Scrooge, Marley indulges in a version of ghostly terror porn. He unfastens the dirty bandage holding his face together, and his jaw immediately descends to his breast, like someone with an invisible foot had just kicked hard at a rotting skull. That his voice then emanates from this oral abyss with a pre-electricity electronic effect, complete with charnel house echo, is every bit as unnerving.

The following tour of Scrooge’s past, with the aid of the first of the three ghosts, then becomes a different kind of visage study, but one just as wracking, with the pain of what was and what could have been etched into Scrooge’s face. This is the visual version of that game we all do late at night, when we can’t sleep, when we wonder what so and so is up to now, if there is something we might have said to that person we loved, or if we would have been better if we hadn’t approached them that on that first day, if they were happier in these intervening years for having stopped knowing us. Or, worse yet, if we will ever know peace and contentment before our time is up. Tick tock, etc.

Normally I put little stock in Academy Awards, because the best works rarely win them, but this television special, amazingly, won one for Best Animated Short Film on account of having gained a brief theatrical release after ABC first aired it. Industry peeps were so bothered by a television program scooping an award that they changed the rules. But hey, you can’t touch a good ghost.

My own first viewing of the work was not unlike my first viewing of 1951’s "Scrooge." In the case of the latter, seven-year-old me snuck downstairs — having consulted TV Guide in advance — to see a middle-of-the-night showing of the film, the sound on low, so as not to wake my parents, with the glow from the television feeling like a ghostly proxy between my shaking, transfixed self and that cinematic London that had lurched out of the horror history of German Expressionism and early Frankenstein pictures. This was a perpetual here-and-now that knew no one single age, no one single kind of person, no one single time of the day, no one limited corner of the human condition. It was a kind of all-ness.

A few years later, when I was allowed to stay up later, I asked my parents to let that be a little later still, because the 1971 animated version was going to be on and it occurred to me that this all-ness might even extend to a cartoon. They probably thought eleven at night was a strange time for a cartoon to air. I didn’t know exactly what to expect, but a form of inculcation had already happened to me. Like Scrooge by the time he gets to the third ghost, I would be ready for whatever was in store.

But as post-transformation Scrooge would wisely remind us, ideally via the voice of Alastair Sim, the people who are prepared to know are those that allow that they don’t know yet.

Damn, I did not know what was coming, and damn, I felt all over again that some forms of our life are most present before they’ve even happened, and we are as alive as we will ever be in trying to get to them. In a Scrooge-ian sense — and I hope a good one — that opening shot down the clock face has never let me go.