It's time to stop seeking "dialogue" with the hateful

Talking nicely with racists, sexists, homophobes and other bigots hurts more than it helps 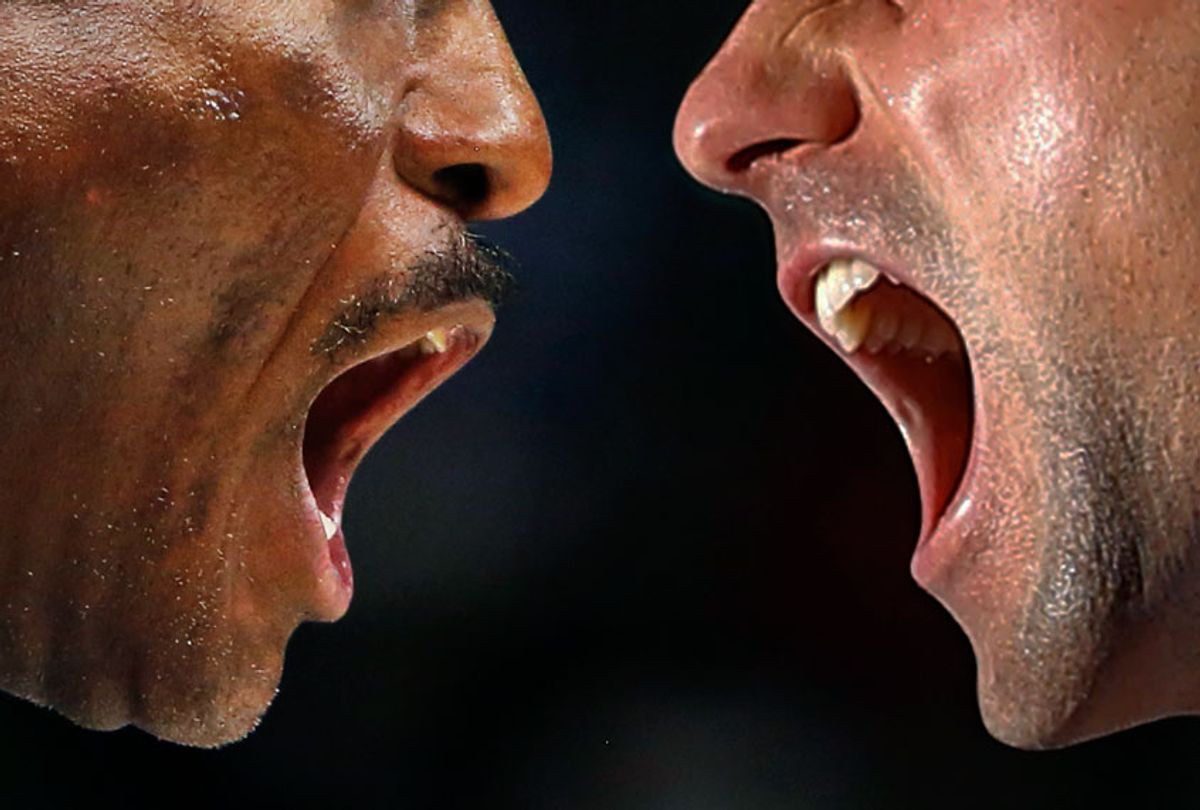 Massachusetts rapper Joyner Lucas' video for "I'm Not Racist" opens with an image of a stern-looking white man wearing a "Make America Great Hat." The Trumpster lip syncs to Lucas' first verse, which is a barrage of cultural caricatures and harmful stereotypes about the black community.

"I don't have pity for you black n****s, that's the way I feel," raps the man. "Screamin' 'Black Lives Matter'/All the black guys rather be deadbeats than pay your bills."

The video pans out and we see this white man is sitting at a table, speaking directly to a black man in front of him. This black man sits and listens as the white man swears he's not racist (because he knows black people), but says African-Americans are lazy and would "rather sell drugs" than work. This goes on for nearly three minutes.

Then, the black man begins. While the white man's verse is centered on racial slurs and brutal stereotypes, the response goes, "And even if I wasn't picking cotton physically/ That don't mean I'm not affected by the history/ My grandmomma was a slave, that shit gets to me."

By the end of this verse, the two men embrace, finally understanding each other in a moment of empathy and equanimity.

The video went viral. By now, it has been viewed over 25 million times and CNN heralded the song as the "brutal race conversation nobody wants to have."

It's a familiar, if false, vision of what talking to the prejudiced and the openly hostile can bring. A Heineken commercial titled, "#OpenYourWorld," premiered in April, featuring an anti-feminist talking to a feminist, a transphobic person chatting with a transgender individual. By the end, all have aired their grievances, found common ground and understand and bonded over German pale lagers. Around that same time, a Pepsi ad featured Kendall Jenner diffusing a tense confrontation between protestors and police with cold soda.

They're just the most visible, polished examples of the idea that open, warm dialogue between the bigoted or the militant and the targets of their rage can solve the social problems of racism, sexism, homophobia, police brutality and other ills. Since Donald Trump embarked on his campaign for president, which emboldened white supremacists and other such hate groups, this idea of having such a "dialogue" has surfaced again and again. All we need to do is talk nicely with each other, the thinking goes, and divisions will be mended, a nation will be healed.

On camera, this "dialogue" often takes the form of perfectly civil conversations between sensible, well-intentioned men and women and the very uncivil, insensible people who hate them. In effect, they offer nothing except a platform for these hateful people who, almost unanimously, appear unmoved and unchanged by the discussion.

More than a few times, the famous white nationalist Richard Spencer has been given such a platform for his harmful propaganda without challenge, in the name of "dialogue." Take Kamau Bell's interview, where the two joke about the horror of James Bond no longer being white. Take Charles Barkley's even less informative chat with him. Neither forwarded any real sense of understanding. Neither mended divisions.

Really, what was the end goal here? What did we see aside from the visual juxtaposition of Spencer spewing his usual racism and a black men listening? This isn't to say that conversations of opposing viewpoints can't or shouldn't take place. It benefits all when informed, principled but opposed positions collide in constructive debate. This isn't that, though.

Moreover, people of color or other targets of hate can decide for themselves whether or not engaging with those that irrationally despise them is worth their time. But certainly, no one should feel obligated to debase themselves by listening politely as unwavering, immovable bigots berate them or their community just for the sake of "dialogue." And, yet, that's exactly what some people, particularly black people, are being asked to do.

In truth, this penchant for discourse is one of the many factors that allows Nazis, white nationalists, homophobes and others to gain footing in the media. The idea that we just need to understand them better, that knowing what they had for dinner will lead us to a place beyond hate, gives them space they don't deserve and the appearance of legitimacy.

It's offensive, dangerous and exhausting.

Videos like "I'm Not Racist" assume equal footing between a racist white man and a black man trying to defend his humanity. They also erase the fact that inequality thrives not just because the hateful say hateful things, but because it is perpetuated by systems and institutions. A recent Boston Globe article found that the median net worth of black Bostonians is $8, compared to $247,500 for whites residents. Certainly, this isn't due to a failure of the black community to establish positive dialogue with any hateful white neighbors.

Aside from the hollowness of the idea of seeing eye to eye or finding some compassion for the opposition, if CNN and popular culture insist on continuing this notion of equal discourse, there needs to be an acknowledgement that conversation isn't going to affect the stronghold of the supremacy or improve life for the people it suppresses. Economic and social inequality doesn't dissipate because Spencer laughs with Bell. Police don't stop killing unarmed black people because we've learned that some neo-Nazis eat at Ruby Tuesday.

Perhaps most insulting of all is how the false notion of two equal sides working toward mutual understanding expects, for instance, black people to meet white racists more than halfway. But there is no halfway point between someone wanting to live, wanting freedom, and another group wanting to oppress them or benefit from the perpetuation of an brutally imbalanced system.

A clip of a man explaining the problematic nature of "I'm Not Racist" went viral on Twitter recently. He questioned, if the video was titled "I'm Not A Rapist," would we be so quick to give room for "both sides?" And what about if the title was "I Am Not Anti-Semitic? "You'd be so insulted by the false equivocation that you would dismiss it wholeheartedly," he argues, adding that if such videos existed they would labeled as outrageous and offensive. It's almost impossible to argue against that.

Both "I'm Not Racist" and its detractor above prove that racism and other elements of the supremacy can manifest even in the spaces reserved for upending them. It shows that, thanks to the power these systems of oppression hold in American society, the oppressed — black people particularly — are expected to listen politely, no matter how bigoted the person on the other side of the table is. In this, simply sitting down with the Richard Spencers of the world is an act of condoning and perpetuating the supremacy in and of itself.

In "I'm Not Racist" and the forwarding of dialogue to the public at large, the comfort of the privileged is being prioritized over the very lives of people simply asking to be treated like human beings. There's nothing equal about that. On these terms, talking to the hateful isn't dialogue at all, and it won't change a damn thing.