Will the Resistance win in 2018? Maybe not, but we must keep fighting

This year was bad, and 2018 could be worse. When victories are elusive, it's time to learn to love the fight 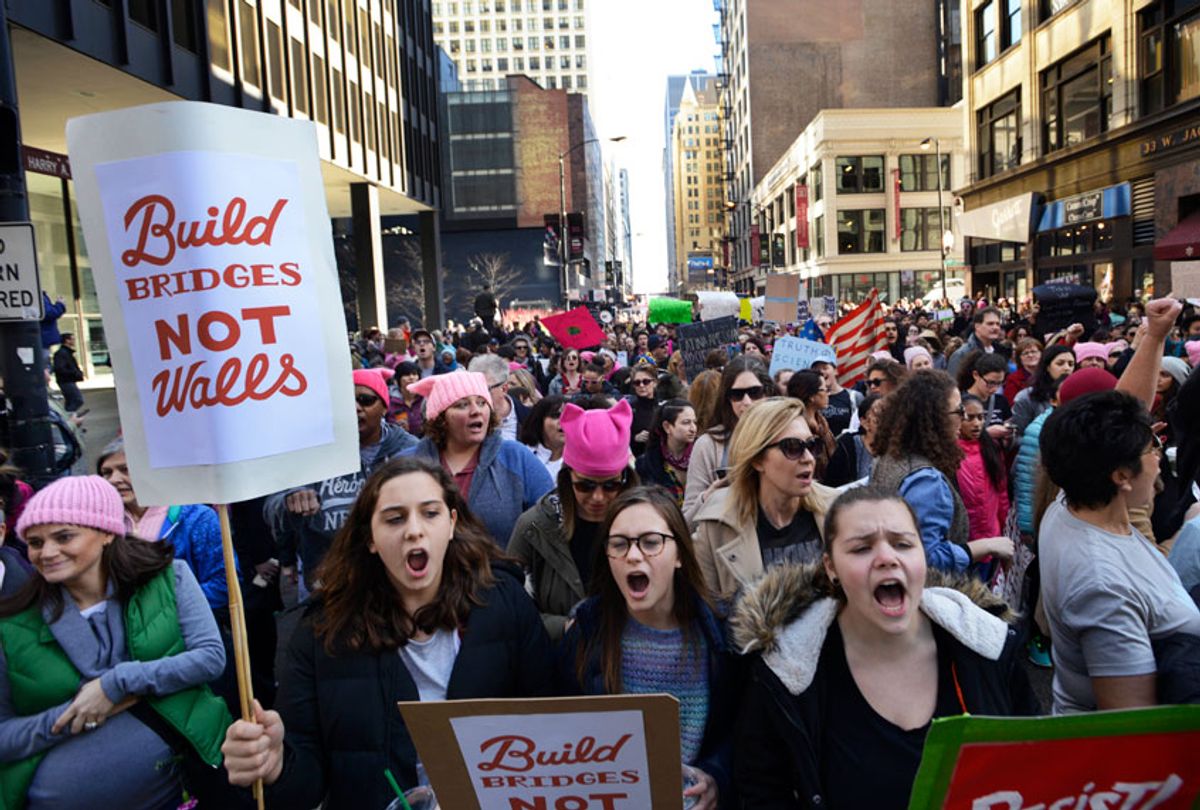 As the clock hit midnight last New Year's Eve, I asked my friends how on earth we could toast in 2017, when the United States was about to inaugurate a racist who didn't even hide his fascist impulses as our next president. One of my friends smiled, raised his glass, and said, "To the fight."

I took it both as reassurance and admonishment. No doubt I had been in a pit of despair since I left the Hillary Clinton party-turned-wake at Manhattan's Javits Center in the early hours of the morning on Nov. 9, wandering in a daze through Hell's Kitchen as people burst into tears on the street. But my friend was right. It is a privilege to have the clarity and resources and voice that allows one to fight back. Many people don't have that and get crushed under the boot in silence. I feel sick and angry and sad all the time, but I don't feel as helpless as many people do. For that, I am grateful.

It's not just OK to take pleasure in the fight. It may very well be necessary, as taking pleasure in victory may elude us for a long time.

Liberals, despite our supposed cosmopolitan qualities -- the ones Fox News loves to deride us for -- are just as mired in Hollywood narratives as everyone else. The belief that good guys will win in the end is endemic, with liberals frequently talking about Donald Trump's fall in terms of "when" and not "if." He has become a totem, with far too many people believing that once he is gone, our problems are over.

But the grim truth of 2017 is that even if Trump ends up in prison or at least in disgrace, his ascendancy is part of a larger story that was never just about him. He's a dim-witted figurehead for the real problem, which is that campaign-finance deregulation and gerrymandering have allowed the Republican Party, which has been completely consumed by authoritarianism, to seize power, despite having a minority of the vote. Even if the bums get thrown out in 2018 (which is a pretty big if), they may have done permanent damage.

The tax reform bill alone is evidence of this. This bill really seems designed to escalate the country's already horrific income inequality. It might seem impossible to believe that someone in power would want our country to become like Mexico, which is one of the wealthiest countries in the world but has widespread poverty because 1 percent of the population owns half the wealth. Mexico is the way it is because those in power wanted it that way, and so it is going for us. Nothing makes fabulous wealth look even more fabulous like comparing it to grinding poverty, after all.

The economic devastation we're facing is terrible enough, but add to that the rapid pace at which Trump is remaking the federal judiciary. He and Mitch McConnell are rapidly cramming the courts with right-wing hacks who may not be particularly bright, but are hardened ideologues who despise civil liberties and are eager to give a pass to Republican corruption. Right now, environmental groups, state attorneys general and civil rights groups are frequently winning in court against Trump's illegal maneuvers. After the courts are packed, that may be over.

Escalating income inequality is Paul Ryan's life work. McConnell held open all those federal seats for Trump and is rubber-stamping appointees now. Trump heard about deregulation on Fox News once and liked the idea, but the actual process of it is coming directly from right-wing think tanks who have yearned to turn the U.S. into a dystopian hellhole for decades. Trump is a vile monster, but he's sitting on top of a party that has rejected democracy in favor of authoritarian rule by a minority.

Maybe we win. Maybe we don't. Most  likely we get some victories but lose much that we hold dear in the meantime. We get a miraculous win in Alabama, but a tax bill designed to destroy our economy passes anyway. Virginia swings to the left somewhat, but not enough to overcome the structural advantages Republicans have built for generations. We may get the House back in 2018, but much of the damage done — to our economy, our democracy, our planet, our collective mental health — will be permanent.

On top of the sheer terror of what Republicans are doing to the country, liberals must also deal with the unbelievably depressing reality that so much of what we hold dear is being destroyed out of spite. For decades, conservative media has aimed a propaganda firehose at a huge swath of white Americans, portraying white Democratic voters as a decadent and smug elite and people of color as a lazy, criminal underclass eager to destroy the country. It worked. Now conservative voters have decided that destroying the economy, wrecking the environment, creating massive income inequality and undermining our democracy is all fine, because makes liberals cry.

In a lot of ways, that's the worst part: knowing that half the country's spirit has rotted away, curdled by propaganda teaching hatred and fear of their fellow citizens. A lot of liberals, especially white liberals, continue to struggle with accepting this new reality, and look for a redemption narrative among those who voted for Trump, most of whom were motivated primarily by spite.

My one hope for 2018 is that liberals let go of all that. Let's resolve to help the people who need help, instead of trying to save people who don't want to be saved. That clarity of mind and purpose will serve us well in the dark days ahead, which won't end anytime soon.