The flagship school proudly hosts its seventh consecutive jungle cat. But is it ethical? 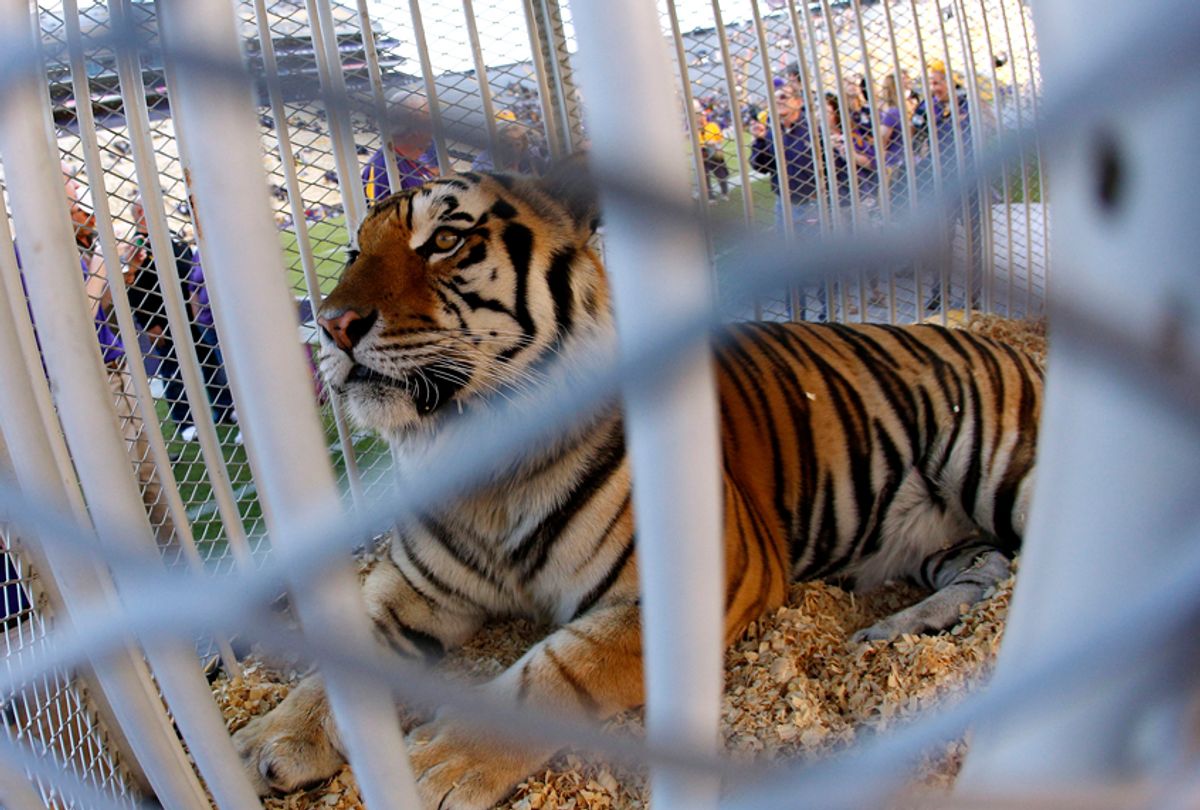 Visitors unfamiliar with a Louisiana icon are often shocked to hear there’s a gargantuan cat roaming just outside the Louisiana State University student parking lot. But supporters (and most locals, it seems) view the presence of Mike the Tiger not as nefarious captivity, but rather a charitable model for endangered species conservation.

Over the years, the university has sparked debate for declining to name any of its buildings after Civil War Union General William T. Sherman, the first head of the school. But newer questions have arisen over its feline mascot. Since 1937,  seven Bengal tigers, all so far named “Mike,” have inhabited a sanctuary just yards between the school's football stadium and basketball stadium.

At the start of the fall 2017 semester, NPR reported the arrival of Mike VII, a now-270-pound Siberian-Bengal mix, to replace the late Mike VI. The report added that LSU stopped purchasing tigers in the 1950s and now adopts donated tigers from centers around the country.

On top of revised methods of tiger acquisition, LSU announced in October its part in the newly launched Tiger Conservation Fund to help save wild tigers from extinction. The school has teamed up with three other SEC universities with tiger mascots: Auburn, Clemson and Missouri, none which have live tigers of their own. (The University of Memphis is the only other university with a live tiger for its mascot, though theirs does not live on campus.) The LSU Foundation told Salon that the fund has received a little over $300 since it began accepting donations in the fall, stressing the money-raising effort was only part of the big-picture goal to raise awareness about tiger conservation.

LSU has sent a the message that it doesn’t want Mike the Tiger to be its zoo-pet spectacle, and even animal rights activists have begun to warm up to the school’s latest carnivore-care practices.

Brittany Peet, Director of Captive Animal Law Enforcement at the People for the Ethical Treatment of Animals (PETA) Foundation, said LSU has made “significant improvements” to their mascot program since building its original habitat, which was about a seventh of the current habitat’s size. It was torn down over a decade ago and was renovated most recently with the arrival of the latest Mike this year. The organization imagines this change has improved Mike’s welfare. “They’re moving in the right direction, and that should be a model for other schools using live animal mascots,” Peet said.

Peet said the habitat, which includes a pool and heated rock, encourages “natural tiger behavior” and shows improvement from past traditions, such as bringing the tiger out in the field in a “small box” during games. LSU has recently decided to end that practice but does not say it was ever unethical to begin with.

“It was just better for the fans that he would just be out in his yard all day so everyone could see him,” said Ginger Guttner, Mike the Tiger’s chief spokesperson, of the change. She added that Mike would be “completely relaxed” whenever he was previously brought on the field. “He was not forced to go to games . . . As someone who is on the field with him, he never showed any signs of distress.”

Some argue improvements could still be made. PETA encourages Mike’s habitat to become accredited by the Global Federation for Animal Sanctuaries, which LSU’s School of Veterinary Medicine and the Tiger Athletic Foundation are reportedly in the process of doing.

At least to those who have seen him, being Mike the Tiger isn’t half bad. The jungle cat’s Twitter shows days full of pampering and play. In fact, he’s reportedly gained a tiger’s version of the “freshman 15” during his short time on campus, at least in part because of rival-team-shaped snacks he’s fed to boost school spirit prior to big games.

But controversy flares beyond the fact that Louisiana’s flagship, humid-subtropical campus hosts a live tiger, whose days are spent soaking up sun and splashing around under a private waterfall between catnaps (which you can watch via live feed from the habitat’s “tigercam”). An entirely separate group has advocated against the mascot, which it claims has blatantly racist roots.

Pro-slavery roots, to be more precise. Before football, the name “Louisiana Tigers” belonged to a Confederate Civil War battalion representing the state. This is reportedly confirmed in a 1937 alumni column and in the 1975 book, "LSU: The Louisiana Tigers," which recounts the Confederate group that “distinguished itself with its fighting spirit in the battle of the Shenandoah Valley, where it was said they ‘fought like tigers.’”

An online petition against the name origin appeared to brightly ignite and quickly fizzle out over the summer, amassing about 640 signatures when The Undefeated reported the story in June. as As of December, the anti-tiger movement has earned under 20 additional signatures, as counter-petitions have sprouted in an effort to keep the mascot in place.

At least for now, Mike isn’t going anywhere. He’s visited hourly by adoring fans from on and off campus, and Guttner believes he sends a strong message to those who meet him about conservation. She added that a photo can only inspire a person so much. “It’s an entirely different thing to see a live tiger up close,” she said.