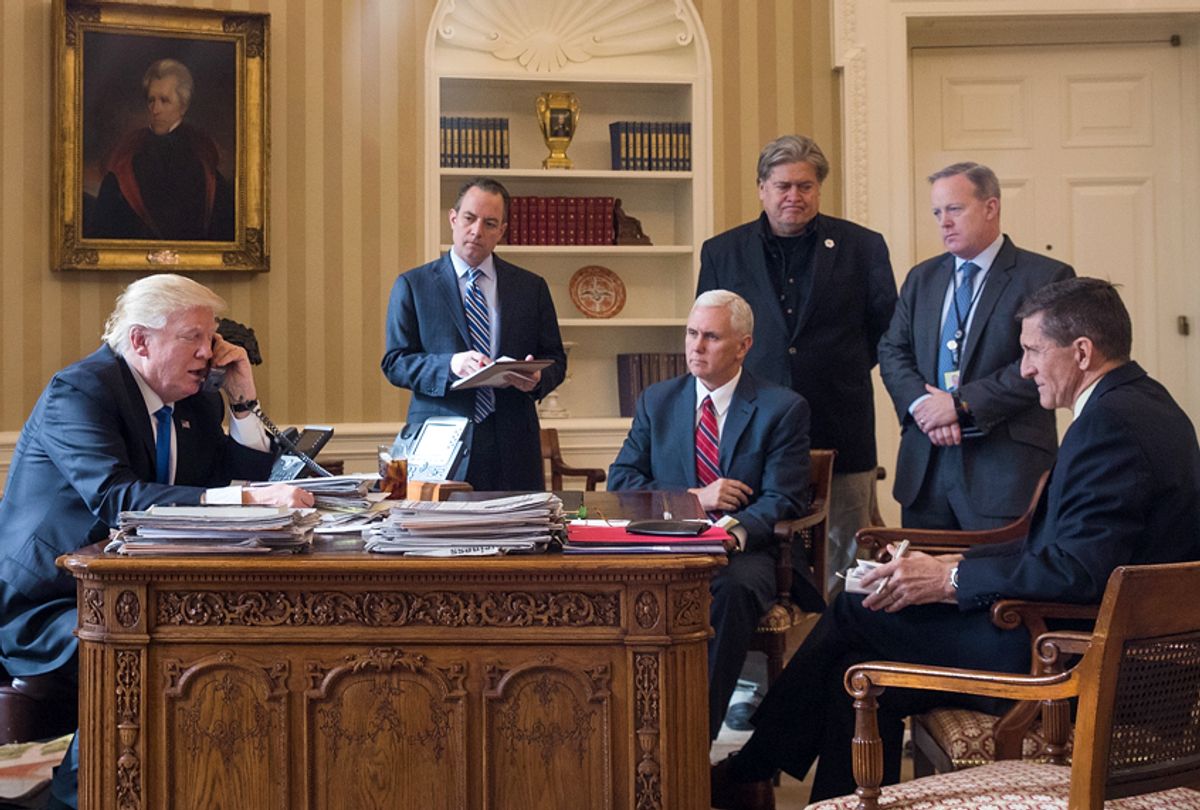 Arriving in the form of a long report, which has already warranted a reaction from the White House, the article details alleged events spanning from before the election, when Donald Trump reportedly was more interested in the benefits of being president than the actual job itself, to after it. According to Wolff, who followed the administration from election day until mid-October, he conducted more than 200 interviews for the book that will be published on Jan. 9.

While it’s debatable what’s fact or fiction within this preview of that book, it still creates a portrait of a president and an administration perhaps more clownishly inexperienced, petty, inept, ignorant, self-defeating and venial than previously imagined. In this, it's a fun read, but also one that leaves you with a certain nausea.

1. Nobody thought Trump would win the election — including Trump.
The report begins by capturing the climate of the Trump campaign prior to election day. Here we find it ensconced in something more like a "corporate back office" than a presidential campaign’s headquarters, which might be because nobody involved was reportedly in it to win it. Wolff says in the report that Kellyanne Conway was already eyeing on-air television gigs after the election, and Trump was just in it to become "the most famous man in the world." In an alleged conversation, Roger Ailes, the former head of Fox News, told Trump if he wanted wanted a career in television, he had to run for president first.

2. Trump was "baffled" by Robert Mercer’s $5 million donation to his campaign.
Another tidbit that suggests that Trump didn’t believe he’d win was that he wasn’t willing to front his own money in the campaign. According to the report, when Robert Mercer, a co-CEO of Renaissance Technologies and a major conservative donor, gave $5 million to the campaign, Trump was "baffled."

3. Trump reportedly knew nothing about the Constitution.
Sam Nunberg, an advisor on Trump’s 2016 campaign, reportedly paid Trump a visit to "explain the Constitution." Nunberg said, "I got as far as the Fourth Amendment before his finger is pulling down on his lip and his eyes are rolling back in his head."

4. Roger Ailes reportedly suggested John Boehner as chief of staff.
And Trump reportedly responded, "Who is that?" Allegedly, Trump initially wanted his son-in-law Jared Kushner for the post, but Ann Coulter reportedly stepped in and allegedly said, "But you can’t. You just can’t hire your children." Ann Coulter: Voice of reason in the Trump camp.

5. Trump became a Silicon Valley fan thanks to an "anonymous" executive.
According to the report:

On December 14, a high-level delegation from Silicon Valley came to Trump Tower to meet him. Later that afternoon, according to a source privy to details of the conversation, Trump called Rupert Murdoch, who asked him how the meeting had gone. Trump went on to allegedly tell Murdoch that "these guys really need my help. Obama was not very favorable to them, too much regulation. This is really an opportunity for me to help them."

6. Murdoch and Joe Scarborough allegedly objected to Bannon being chief of staff.
Murdoch told Trump that Bannon was a "dangerous choice," and Scarborough, the former congressman, told Trump "Washington will go up in flames." Trump then turned to Reince Priebus, RNC chairman, but he was reportedly advised by Jim Baker, chief of staff for both Ronald Reagan and George H.W. Bush, not to take it. According to the report, Priebus had his own concerns too. "He had come out of his first long meeting with Trump thinking it had been a disconcertingly weird experience. Trump talked nonstop and constantly repeated himself," Wolff says in the report.

7. Bannon had some . . . interesting ideas on achieving peace in the Middle East/
The report details an alleged meeting that took place in Greenwich Village prior to Trump’s Inauguration where Bannon reportedly first proposed moving the U.S. Embassy in Israel to Jerusalem. According to the report, Bannon said:

"Day one we’re moving the U.S. Embassy to Jerusalem. Netanyahu’s all-in. Sheldon" — Adelson, the casino billionaire and far-right Israel defender — "is all-in. We know where we’re heading on this . . .  Let Jordan take the West Bank, let Egypt take Gaza. Let them deal with it. Or sink trying."

In this meeting, it was also reportedly revealed that Trump was trying, and failing, to meet with Putin. "Putin couldn’t give a shit about him," Bannon allegedly said, "So he’s kept trying."

8. To Bannon, the real enemy was always China.
In the same alleged meeting, Bannon reportedly revealed that the Trump administration’s real enemy was China. According to Wolff, Bannon said:

"China’s everything. Nothing else matters. We don’t get China right, we don’t get anything right. This whole thing is very simple. China is where Nazi Germany was in 1929 to 1930. The Chinese, like the Germans, are the most rational people in the world, until they’re not. And they’re gonna flip like Germany in the ’30s. You’re going to have a hypernationalist state, and once that happens, you can’t put the genie back in the bottle."

9. Bannon tried to turn Trump against Murdoch.
According to Wolff, Bannon was allegedly trying to wedge his way in between the future president and the man who helped get him there:

Bannon wanted Ailes to suggest to Trump, a man whose many neuroses included a horror of senility, that Murdoch might be losing it. "I’ll call him," said Ailes. "But Trump would jump through hoops for Rupert. Like for Putin. Sucks up and shits down. I just worry about who’s jerking whose chain."

10. Ivanka Trump allegedly said "impatience" is the cause of her father’s hair color.
Ivanka, who reportedly has her eyes set on being the first woman president one day, allegedly poked fun of her dad’s hair color to her friends. According to the report, she’d describe the "mechanics" of his hair routine, explaining that he uses "Just For Men" and the longer it’s left on, the darker it gets. "Impatience resulted in Trump’s orange-blond hair color," Wolff wrote.