Eric Trump wonders if Ellen DeGeneres is part of the "deep state," a concept he may not grasp

Is the delightful daytime talk-show host part of a shadowy governmental cabal? Who can say? 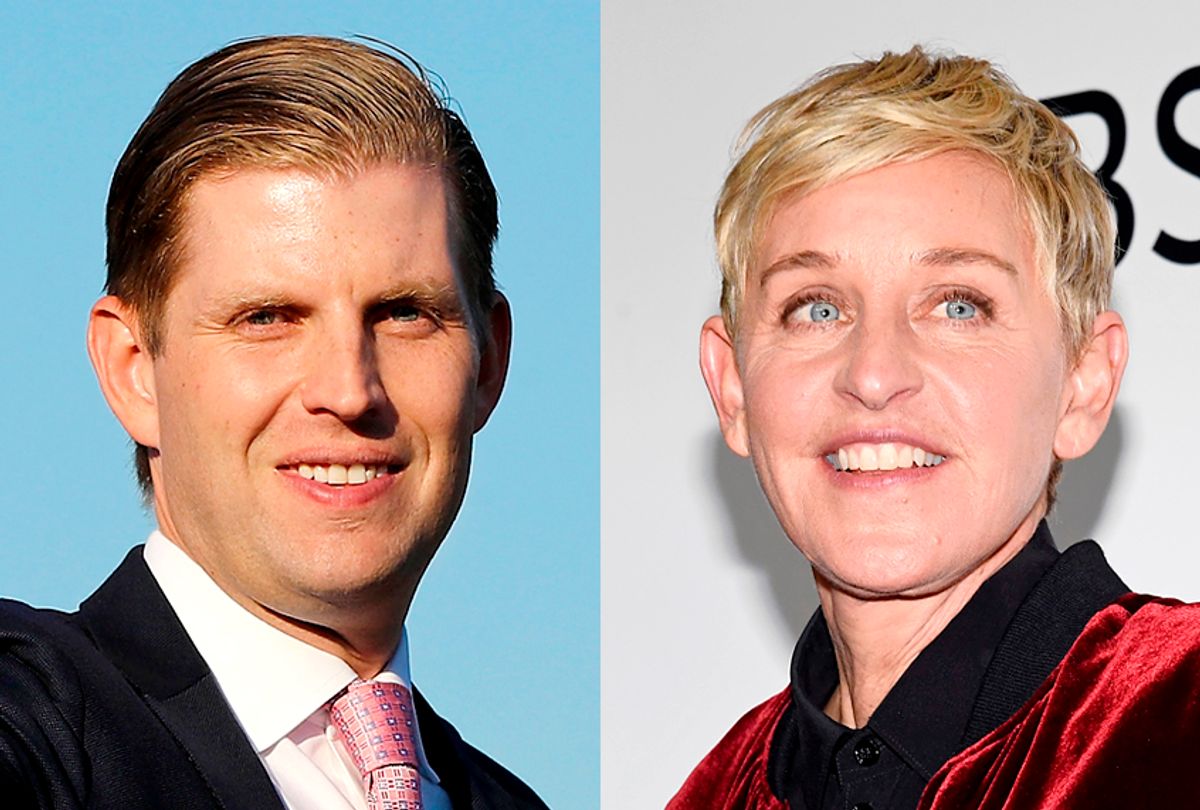 Shortly after his father, President Donald Trump, released a twinned pair of hair-raising whoppers on Twitter, Eric Trump chiseled his own thoughts into a winner of a tweet Tuesday night, one that, perhaps comically, wondered aloud if daytime talk-show host and national treasure Ellen DeGeneres was part of a bureaucratic conspiracy to undermine the elder Trump's agenda.

Adding an image of the accounts Twitter proposes he follow based on his current feed, the Trump child you'd least want to have dinner with wrote, "Shocking... once again, here are the @Twitter 'suggestions' of who I should follow. #DeepState." One was former president and Trump foil Barack Obama, the second was Trump opponent Hillary Clinton and the third was the official account of the "The Ellen DeGeneres Show," DeGeneres' syndicated program.

Now there's a significant, significant chance that the younger Trump, who fancies himself the wit, might have been angling toward humor here. Indeed, the list proffered by Twitter is somewhat absurd in and of itself.

While it's pretty reasonable to assume that a Twitter user who follows the current president, multiple mainstream news sources and several politicians might want to also follow the most recent commander in chief, Obama, and the most talked-about former politician in the world, Clinton, why exactly that user would want updates from the lovably spicy café latte that is the DeGeneres show is unclear. It's a bit of a sore thumb almost — almost — worth a humorous poke on social media.

But Trump, who has often enjoyed toying with right-wing, "alt-right" fringe notions more than his father, fumbles when he uses the "deep state," a favorite subject of the tinfoil-hat crowd.

The notion of the "deep state" hangs on the interesting — though ultimately paranoid — idea that previously appointed partisans in bureaucratic government positions, along with moneyed interests, hold sufficient sway in terms of crafting and enforcing policy that they can swing the balance of power away from those currently holding elected office.

Conspiracy-minded outlets and individuals have spun this fringe concept into claims that a shadowy cabal, led by Obama and Clinton, continue to hold the reins in the U.S. establishment and are obstructing President Trump's work in an effort to — who knows, maybe — allow the UN to take over the country and enslave us all.

Dropping mentions of the "deep state" has been a handy way for right-wing media to plaster over both president Trump's self-borne inability to enact or execute policy and the considerable resistance to his agenda forwarded by the definite majority of Americans who did not want him in the White House in the first place. It's not that Trump is failing or unpopular, goes the reasoning, it's the that evil deep state is frustrating the will of the people. This in and of itself is a subversion of popular will.

Here, it's not so interesting that Eric Trump would take a swing at Twitter for suggesting he follow accounts that, if Twitter actually knew who it was speaking to, it would never suggest. It's not that the president's son would actually believe the social-media platform is in cahoots with those people who, one guesses, corrupt his newsfeed (it's unclear that he does). It's not even all that important that he singled Ellen DeGeneres out as a possible member (as humorous as it is). It's that someone so close to the commander in chief is batting around those ideas without a clear acknowledgement of how ultimately toxic and counterfactual they are.

But that's Eric Trump for you.