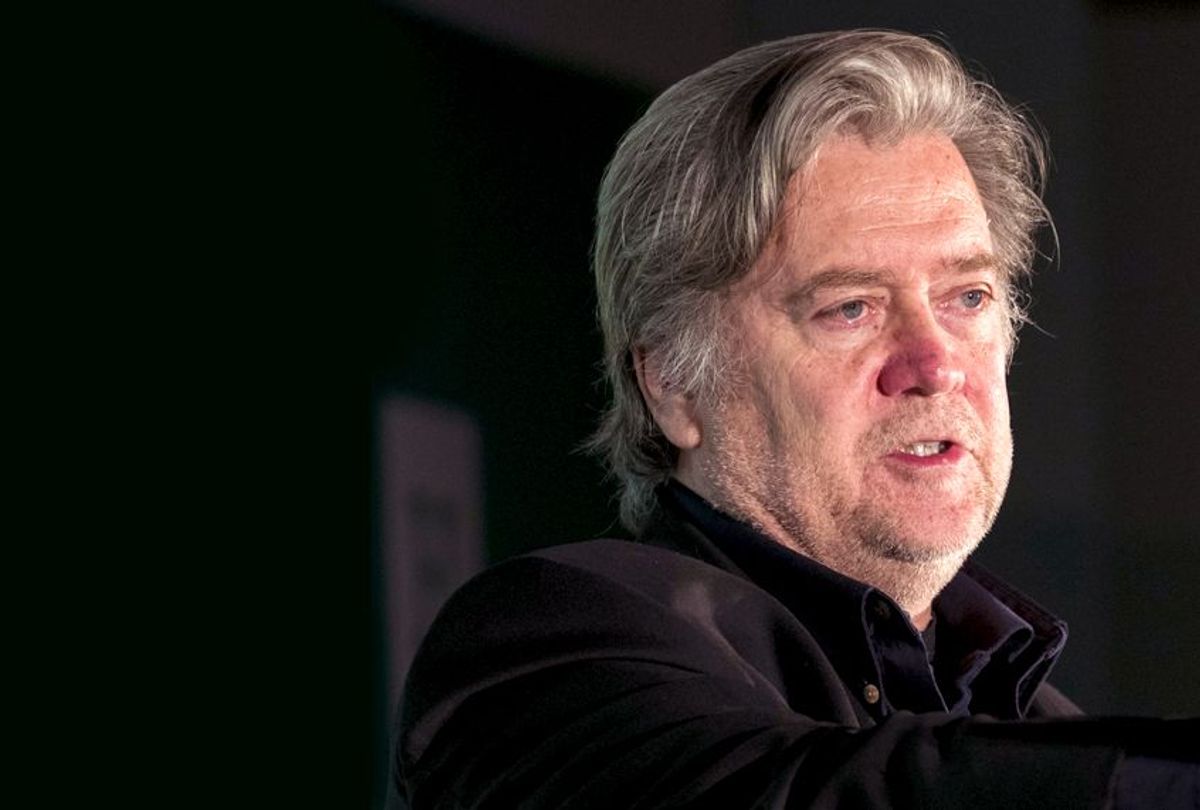 In an upcoming book offering an inside look at President Donald Trump's inner circle, former White House chief strategist Steve Bannon had surprising words regarding the ongoing Russia investigation. He referred to the June 2016 meeting in Trump Tower between top campaign officials -- including Donald Trump Jr. -- and alleged Russian agents as "treasonous."

"They’re going to crack Don Junior like an egg on national TV," Bannon said in the book, according to the Guardian. In his book, "Fire and Fury: Inside the Trump White House," author, Michael Wolff conducted more than 200 interviews "with the president, his inner circle and players in and around the administration."

Bannon also reportedly said he believed special counsel Robert Mueller's path to Trump goes straight through the president's closest confidants. These remarks stand in stark contrast to more than a year of blatant denials from anyone involved in the Trump campaign or his eventual administration, as well as Breitbart News' concerted attempts to undermining Mueller's investigation and the entire Russia scandal.

"The three senior guys in the campaign thought it was a good idea to meet with a foreign government inside Trump Tower in the conference room on the 25th floor – with no lawyers," Bannon said. "They didn’t have any lawyers."

He added, "Even if you thought that this was not treasonous, or unpatriotic, or bad shit, and I happen to think it’s all of that, you should have called the FBI immediately."

Bannon, alongside the "alt-right" and most of mainstream conservative punditry, has sought to undermine Mueller's investigation at all costs, writing off the idea of collusion as a witch hunt by Democrats and the political "establishment." But it's not the first time Bannon has pivoted in the opposite direction. After disgraced Alabama Senate candidate Roy Moore, suffered an unexpected defeat in the December special election, Bannon  — who had backed Moore strongly and convinced Trump to support him — abandoned him immediately and sought to blame the loss on others.

But even though Bannon deemed the meeting to be potentially nefarious, he suggested other ways it could have occurred more quietly. He said that it could have taken place "in a Holiday Inn in Manchester, New Hampshire, with your lawyers who meet with these people."

From there, he continued, information could be "dump[ed] … down to Breitbart or something like that, or maybe some other more legitimate publication," the Guardian reported.

As a professed nationalist, are Bannon's intentions simply driven by patriotism, possibly pure, or is he just critical of the brazen and thoughtless way in which the meeting took place? As ever, it's difficult to divine the motives of this self-appointed political genius.

Bannon's words may shine a light on his reported struggle to advance Trump's so-called America First agenda inside the White House, specifically his conflict with Kushner. The battle for influence inside the White House between Bannon and Kushner, along with the latter's wife, Ivanka Trump, proves to be a recurring theme in Wolff's book.

"You realize where this is going," Bannon said. "This is all about money laundering. Mueller chose [senior prosecutor Andrew] Weissmann first and he is a money-laundering guy. Their path to fucking Trump goes right through Paul Manafort, Don Jr. and Jared Kushner ... It’s as plain as a hair on your face."

Perhaps Bannon is just doing what he always does, trying to sow chaos and hatch Machiavellian plots. His personal loyalty to the president only goes so far. His true allegiance is to himself — and more importantly — his far-right nationalist worldview.