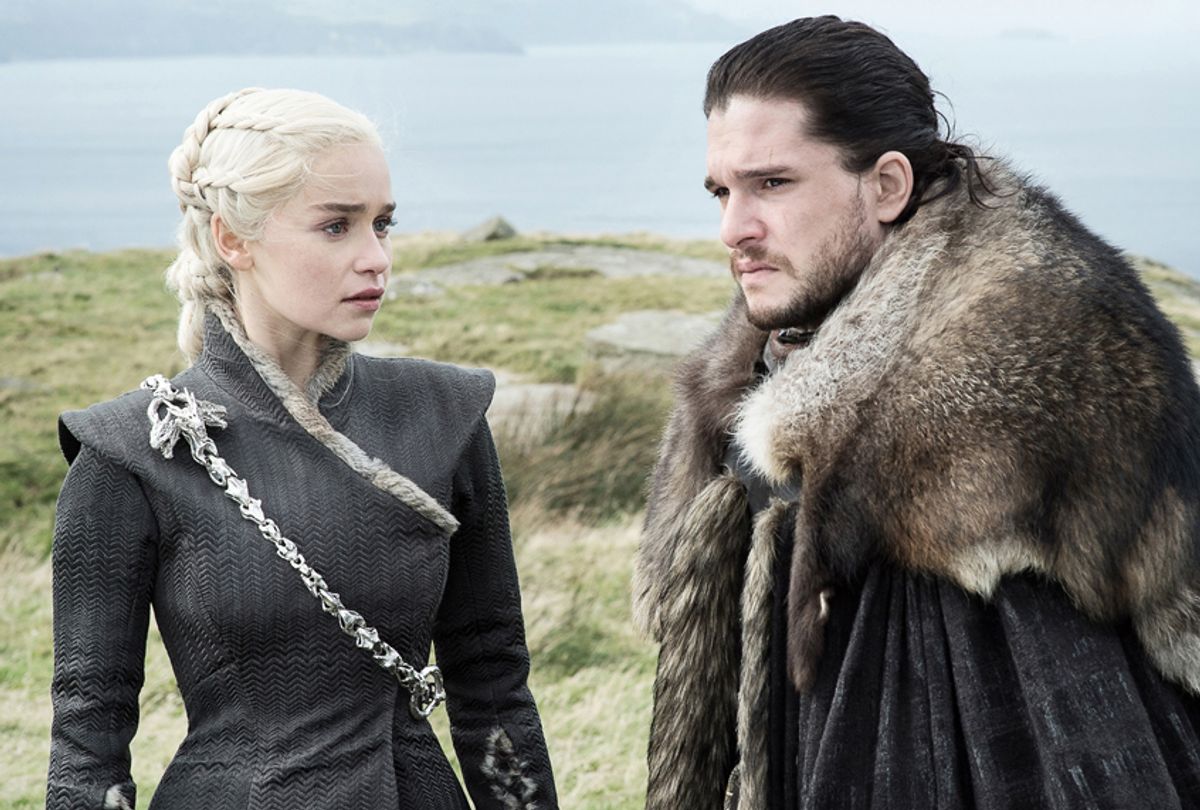 By now, all good Throneys know that our watch is not due to end until 2019, when the six-episode final season of “Game of Thrones” lands at last. For some of us, that delay is more than acceptable. Torturous as the prospect of a 12-months-plus wait may be, it’s still better than the emotional void that awaits us once it’s truly finished.

Nevertheless, no news about “Game of Thrones” lands without an accompanying nagging sensation. This feeling grows more acute with each passing season, and now that we’re facing the prospect of the series’ end, it’s downright prickly. Maybe you’ve felt it too. In fact, you may have sensed it upon reading the behind-the-camera talent list for the drama’s final act.

Once again, David Benioff and D.B. Weiss are on board to direct episodes, as will David Nutter and Miguel Sapochnik. Benioff and Weiss are also writing a number of the final hours, along with Bryan Cogman and Dave Hill.

Yet again, the dudefest abides.

On Thursday, not long after HBO confirmed the 2019 date, Variety’s Mo Ryan broke down the unequal gender split in the top ranks of production over the year on Twitter. It is sobering, to say the least.

To put names to those numbers, “Game of Thrones” has only ever employed a single female director, Michelle MacLaren, who directed four episodes – two in season 3 and a pair in season 4. Jane Espenson penned one episode (and a pretty great one at that, season 1’s “A Golden Crown”) while Vanessa Taylor, who shares a writing credit with Guillermo Del Toro for current awards season contender “The Shape of Water,” wrote three, the most recent being 2013’s “Dark Wings, Dark Words.”

The almost-exclusively male “Game of Thrones” directors lineup and writing staff has been pointed out time and again over the years, particularly in critiques of the exploitative nature of sex and violence towards women in its narratives. Almost as much digital ink has been spilled taking apart its unnuanced portrayal of gender dynamics as blood has been shed in Westeros and Essos.

So while one can’t really claim surprise at the consistency of the gender equation among the show’s writers and producers at this point, dismay is a reasonable reaction, given where Weiss and Benioff left off with the story.

The seventh season, the second one completely unchained from George R. R. Martin’s “A Song of Ice and Fire” novels, ended with the North and Daenerys Targaryen’s forces preparing for war against the White Walkers and their undead army. Though Jon Snow bears the title of King in the North, the seat of power at Winterfell is under the stewardship of his half-sister (and in truth, his cousin) Sansa Stark.

Further south, Cersei Lannister is clinging to her title of Queen of the Seven Kingdoms and has ordered a mercenary army to fight for her claim, unbeknownst to the rest of the nobles. In other words, although Jon, Ser Davos Seaworth, Tyrion and Jaime Lannister and dear old Bronn are important members of the Great Game, the major power of this world rests in the hands of women.

And in these final acts, their actions, motivations and characterizations will be determined and illustrated by male writers and directors. Men who, to be fair, have created some incredible episodes of television. Sapochnik directed “Battle of the Bastards” and “Hardhome,” for example. One of Cogman’s episodes is “Oathkeeper,” which was directed by MacLaren. Cogman also wrote the first sexual encounter between Grey Worm and Missandei which desperately could have benefited from a woman’s point of view.

And a number of the major female characters in the series have been written by the series producers and Martin as women defying prescribed gender roles by operating in primarily male arenas. (An episode that specifically addressed that, “The Bear and The Maiden Fair,” was written by Martin and directed by MacLaren.) But at some point in these final episodes the story must reckon with certain aspects of their lives, particularly Brienne of Tarth’s budding affections for Jaime or even the romantic overtures Tormund is making. The latter has been illustrated through humor, but tying up the former calls for a subtler touch, and subtlety has rarely, if ever, been a hallmark of this show’s production.

As the series approaches the finish, all of its characters deserve a decent send-off including its women — heck, considering all they’ve been through, especially its women. Ending any series in a way that’s universally satisfying is a tall, if not impossible, order, and if Benioff, Weiss and the rest of the Brotherhood under the “Game of Thrones” banner can find a way to do that, few will take umbrage. But one suspects the odds of success would be improved if they had invited some female heavy hitters to carry the show home.

Guess we'll have to pin those hopes on the spinoffs.