Famously stubborn Breitbart chief is now groveling to Trump, after the entire GOP turns on him 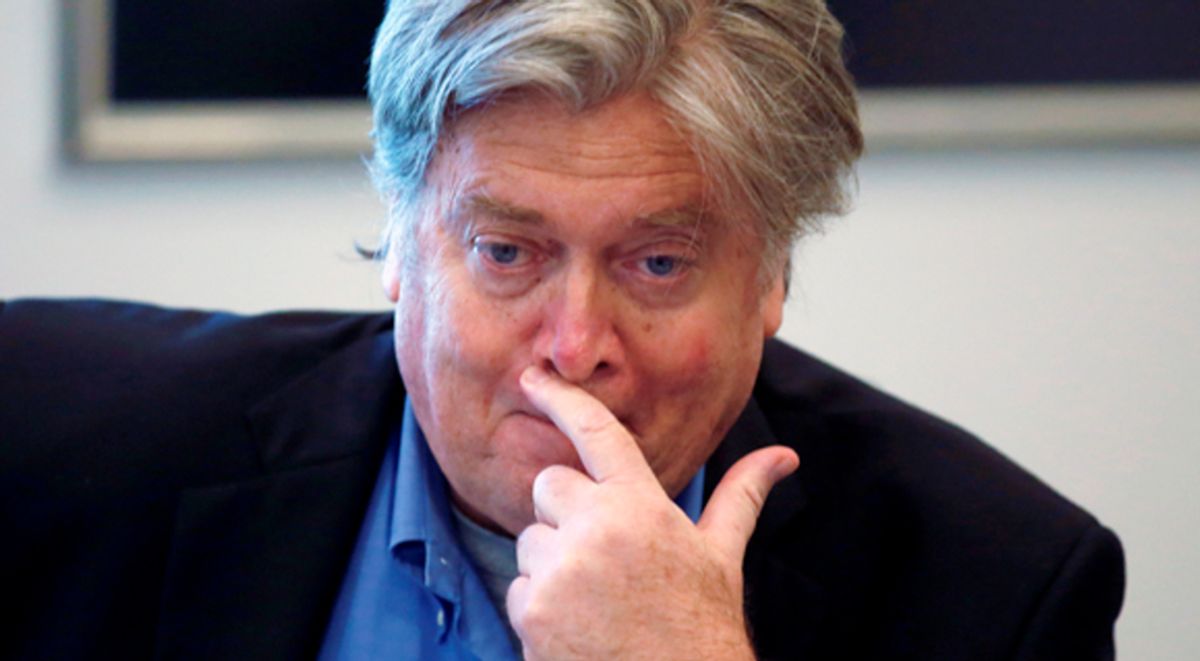 Former White House adviser Steve Bannon is trying to win back the good graces of Donald Trump after he repeatedly trashed the president in a new book, but thus far it's not working.

“He couldn’t have picked a worse day on the calendar for this to happen,” an anonymous Republican pollster told Politico, referring to the fact that Trump spent the weekend with the GOP’s top congressional leaders — people whom Bannon has sworn to overthrow — just days after the Breitbart News chief was quoted as vociferously criticizing presidential son Donald Trump Jr. and deriding the senior Trump as having a child-like mind.

The president has repeatedly denounced Bannon as “Sloppy Steve” and claimed that his exiled adviser had “cried” when he was fired from his administration job.

Bannon is also being blamed for inviting author Michael Wolff inside the White House where he was able to practically set up camp inside an employees-only area.

Several of Bannon’s old enemies in the GOP ruling class have been reveling in his exile from Trumpworld.

“This is a bigger win for the president, for whom Bannon is now less able to create problems,” longtime GOP strategist Karl Rove told Politico. “Bannon shredded his biggest claim, that he was the president’s leader on the outside, the keeper of the flame who had discarded the ‘influence’ of being a mere staffer for the ‘power’ of being the leader of the nationalist populist movement.”

But even Bannon’s former allies in the grassroots conservative world have turned on him, including radio host Rush Limbaugh, who confirmed reports from journalists working out of the White House that Bannon was a constant leaker.

“The thing that I think everybody believes and that everybody knows is that most of the leaking that was coming out of the Trump White House was Steve Bannon,” Limbaugh said on his program last Thursday. The popular conservative pundit also said he had “never heard of” Bannon before the latter joined up with the Trump presidential campaign in the fall of 2016.

Several of Bannon’s former financial benefactors have denounced him as well, including his most significant donor, Rebekah Mercer, who owns a minority stake in the parent company of Breitbart News. Last Thursday, White House Press Secretary Sarah Huckabee Sanders advised the company to consider firing Bannon from his role as executive chairman of its board.

Administration officials also seem to be encouraging Bannon’s former White House allies to condemn him. During a Sunday interview with CNN, senior Trump adviser Stephen Miller excoriated Bannon’s remarks to Wolff as “grotesque,” “out of touch with reality” and “vindictive.”

Faced with a cavalcade of criticism, Bannon issued a rare public statement of apology for his comments.

“Donald Trump, Jr. is both a patriot and a good man,” he wrote. “My support is also unwavering for the president and his agenda — as I have shown daily in my national radio broadcasts, on the pages of Breitbart News and in speeches and appearances.”