Winfrey's speech stirred speculation that she may challenge Trump in 2020. Now the president is talking 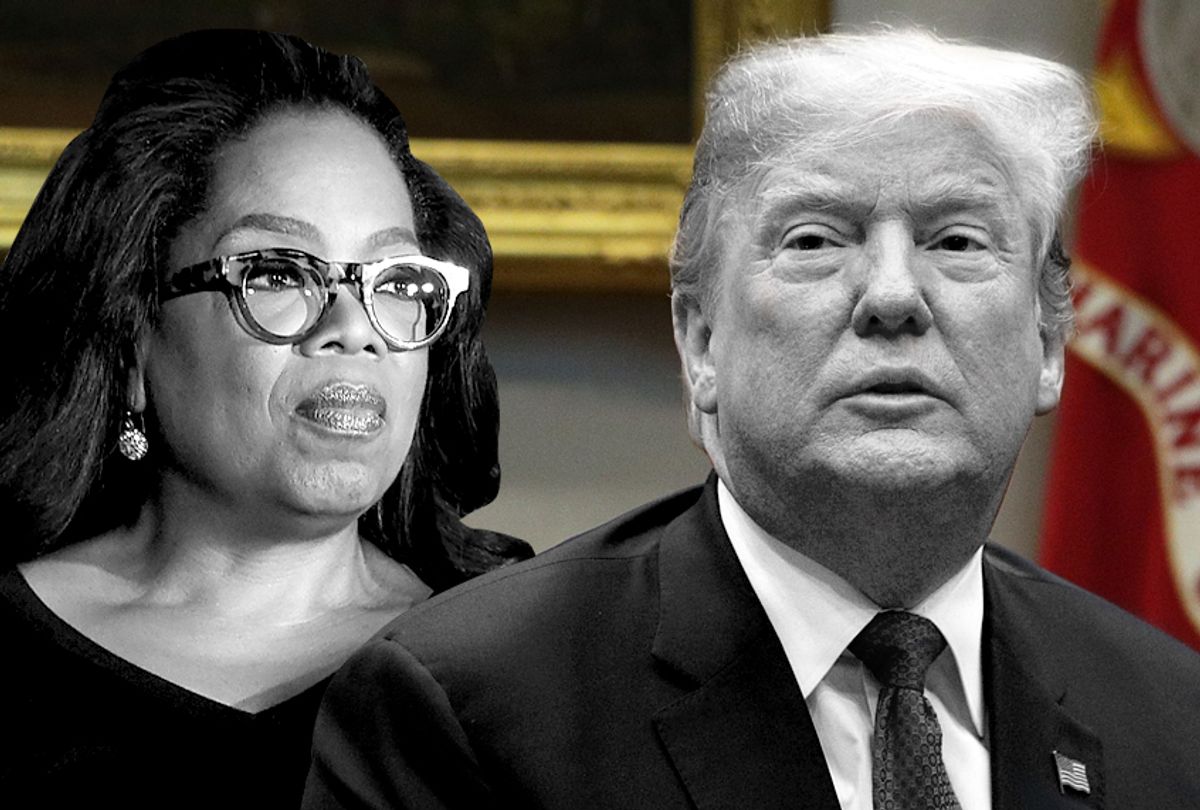 Oprah Winfrey’s moving acceptance speech at the 2018 Golden Globe Awards ceremony Sunday may go down in history, not just for her call to end sexual misconduct, but also perhaps as her first speech as a presidential candidate. At least many left-leaning internet users hope so.

The star’s show-stopping speech stirred speculation that she may challenge Donald Trump in 2020, with everyone from political pundits to late-night talk show hosts commenting about the possibility. One person who has particularly positive opinions on Winfrey is, oddly enough, her potential opponent in the race, President Donald Trump.

According to the White House press pool, the president said, "Oprah will be lots of fun," on Tuesday. "I did one of her last shows." Trump didn't seem concerned about facing off with Winfrey in 2020, however. "I don’t think she’s going to run," he said, adding that if she did, "I'll beat Oprah."

This is actually in line with the various Trump comments praising Winfrey that have resurfaced amid all the speculation. Turns out, the president not only "adores," her but also regards her as a worthy candidate. Well, at least he used to.

In past years, Trump has appeared on Winfrey's show, once in 1988 for an interview in which he teased a presidential bid, and along with his family in 2011.

But that is far from all. In a 1999 appearance on "Larry King Live," Trump said Winfrey would be his "first choice" for Vice President should he run, adding that "If she’d do it, she’d be fantastic. I mean, she’s popular, she’s brilliant, she’s a wonderful woman. I mean, if she would ever do it. I don’t know that she would ever do it. She’s got, you know. She would be sort of like me." As well, he once said that the television magnate "knows how to win."

Sunday wasn’t the first time Oprah had internet users hoping she’d consider a presidential bid. On September 28 of last year, Oprah shared a column by The New York Post’s John Podhoretz on Twitter that called her the Democratic party's best hope for 2020.

Although the star has previously squashed speculation of a potential presidential campaign, her best friend and "CBS This Morning" co-host Gayle King at least left the door partially open to the prospect Tuesday, saying, "I do think she’s intrigued by the idea."

Winfrey's longtime partner, Stedman Graham, helped ignite the discussion when he said she would "absolutely" run but that ultimately it would be "up to the people," in an interview with the Los Angeles Times on Sunday.

This is all very nice, but it's easy to guess that things could get ugly between the two should Winfrey run. During her 1998 interview with Trump, the same one in which he teased a presidential run, Trump said, "I wouldn’t go in to lose. I’ve never gone in to losing in my life."