Joe Arpaio's Senate campaign is just the start: The GOP's 2018 primary season will be a total fiasco 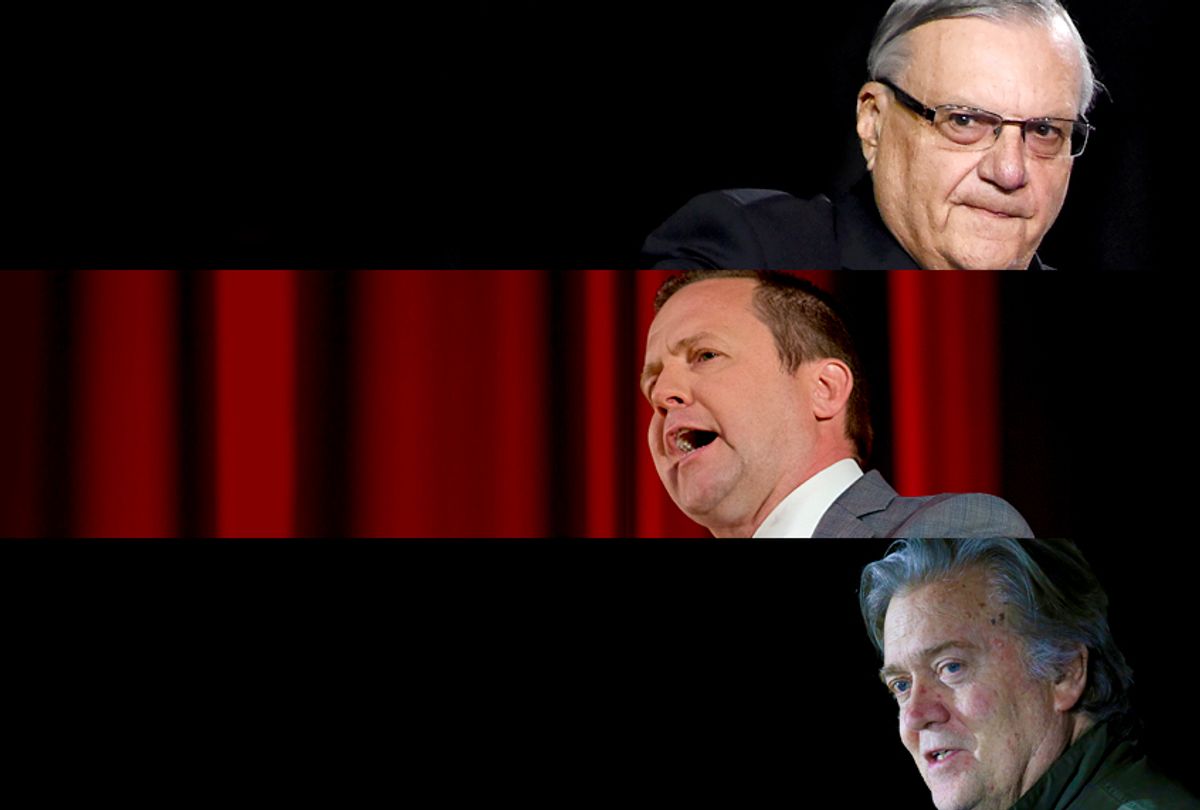 No one is celebrating the news of Steve Bannon’s unceremonious ousting from Breitbart perhaps more than Mitch McConnell. The Senate Majority Leader and his allies had been targeted by the right-wing media provocateur as part of Bannon's so-called plan to destroy the Republican Party and to remake it in his nationalist image. But Bannon is now out as chairman of Breitbart News, a job he'd held since 2012, except for brief stints as CEO of Donald Trump’s 2016 presidential campaign during the general election and then as Trump’s chief White House strategist. His downfall comes a week after the publication of Michael Wolff’s book “Fire and Fury,” in which Bannon is quoted criticizing Trump's children and administration.

In a not-so-stunning reversal of fortune for the anti-globalist faction of the president's political base, the GOP civil war Bannon promised to inflict upon McConnell’s establishment sphere has claimed Bannon as one of its first victims. The New York Times reports that Bannon was forced out by Rebekah Mercer, a conservative mega-donor who, along with her billionaire hedge fund manager father, Robert Mercer, is a minority owner in Breitbart. "My family and I have not communicated with Steve Bannon in many months and have provided no financial support to his political agenda, nor do we support his recent actions and statements," Rebekah Mercer said in a statement to The Washington Post on Thursday.

McConnell may well feel a sense of relief today, but Republicans’ prospects of avoiding a brutal 2018 primary season are not much better with Bannon off the stage. He’s already done his damage.

After leaving the White House last year, Bannon told Fox News' Sean Hannity that there was a "coalition coming together" to challenge every incumbent Republican senator up for re-election in 2018, with the sole exception of Ted Cruz in Texas. He seemed to willfully ignore the fact that all the GOP incumbents in question have voted with Trump at least 90 percent of the time during his first year.

Bannon said he would back any GOP candidate willing to disavow McConnell and vote to end the Senate filibuster. While he is clearly no longer the political force he was when he made his endorsements last fall, the slate of far-right candidates Bannon unleashed are still poised to cause a real headache for Republicans this year.

Although Democrats must defend a historically high number of Senate seats, some races that offer Republicans their best chance to pick up seats have soured into intra-party fights that may lead to avoidable GOP losses. Republicans are already navigating difficult political terrain with the massive unpopularity of Trump, and after the unexpected loss of a Senate seat in Alabama, the party's majorities in both houses of Congress are clearly in jeopardy.

In Arizona’s Republican race to replace Sen. Jeff Flake, who announced his retirement after one term last year, Bannon has already endorsed far-right candidate Kelli Ward, a former Arizona state senator who was unofficially endorsed by Trump and raised more than $1 million in 2017. Her campaign, however, has sought to downplay Bannon’s endorsement following the “Fire and Fury” fallout.

“Steve Bannon is only one of the many high-profile endorsements Dr. Ward has received. Her focus remains on winning this race, which she is in a great position to do, and then helping President Trump advance an America First Agenda,” Ward’s press secretary, Zachery Ward, wrote in a statement. Roll Call’s Bridget Bowman reported that Bannon has since been scrubbed from Ward’s endorsement page on her campaign website.

Complicating matters immeasurably for Republicans, only hours before Bannon’s firing from Breitbart was announced, America’s self-proclaimed “toughest sheriff,” Joe Arpaio, announced on Tuesday that he’s running for the Senate because Washington needs “fresh blood.” Arpaio is undeniably a right-wing hero with considerable appeal to the Republican base. He is also 85 years old.

After decades of negative press and court sanctions, voters in Maricopa County (which includes Phoenix) finally voted to oust the sheriff by a whopping 10-point margin in 2016, even as Trump carried Arizona's most populous county by three points. Arpaio's controversial policing policies included an infamous “tent city” prison characterized by numerous abuses, a long history of racial profiling and more than 157 deaths of inmates in his custody. By a two-to-one margin, Arizonans opposed Trump’s pardon of Arpaio after he was found guilty of contempt of court last July for turning his deputies into a “full fledged anti-illegal immigration agency." It’s no surprise then that Arpaio is expected to be a motivator for increased Latino political activism in the state this fall.

In nine of the 10 states won by Trump in 2016 where a Democratic senator is up for re-election this year, Bannon’s early involvement has already caused trouble for Republicans. In West Virginia, Bannon’s endorsement of Patrick Morrisey, the state’s conservative attorney general, is already being used as an attack line by Republican rival Rep. Evan Jenkins. The same thing is transpiring in Wisconsin, where Bannon backed businessman Kevin Nicholson, who is opposed by mainstream Republican state Sen. Leah Vukmir.

A prime Senate pickup opportunity in Indiana, meanwhile, has turned into a Republican brawl. The state’s crowded GOP Senate primary to take on vulnerable Democratic Sen. Joe Donnelly isn’t until May, but Republican Reps. Luke Messer and Todd Rokita already have five lesser-known candidates to compete against and have spent months attacking one another. In Virginia, the Bannon-backed Confederate-flag fan Corey Stewart is again running for statewide office, only months after losing the Republican gubernatorial primary to Ed Gillespie. “Corey Stewart is the reason Gillespie is going to win,” Bannon assured The Washington Post last fall. Gillespie lost to Ralph Northam by nine points in the historic Democratic statewide sweep.

Mississippi could see two Senate elections next year, as 80-year-old Sen. Thad Cochran has been unable to cast votes due to issues with his health, spurring speculation of an imminent retirement. State Sen. Chris McDaniel, who narrowly lost to Cochran in a wild election in 2014, is expected to announce a challenge to the state’s freshman senator, Roger Wicker.  A Tea Party member, McDaniel has reportedly been encouraged to run by both Bannon and the Mercers. According to The Washington Post, however, Trump in October assured Wicker of his support for his re-election bid.

In Nevada, Sen. Dean Heller is the only GOP senator up for re-election in a state won by Hillary Clinton in the 2016 election. First he must first fend off a primary challenge from Las Vegas businessman Danny Tarkanian, who is mounting his sixth try at elected office. The Bannon-backed conservative candidate (son of legendary college basketball coach Jerry Tarkanian, a Nevada hero) says Heller is not sufficiently supportive of Trump’s agenda. In a statement to the Associated Press, Tarkanian called himself a "conservative Republican who supports the policies of President Trump to repeal Obamacare and end illegal immigration."

“[I]f Mr. Bannon chooses to support me in our effort to repeal and replace Dean Heller with someone who will truly have the President's back, I welcome his support," Tarkanian wrote in a statement.

“Danny Tarkanian and Steve Bannon are frauds whose only skill is losing elections and costing Republicans seats,” Heller spokesman Keith Schipper responded in a statement.

More than half of GOP primary voters say they'll vote for someone besides Heller, according to an October poll. If Tarkanian beats Heller, he’ll face Democratic Rep. Jacky Rosen, who defeated him in a 2016 House race by fewer than 4,000 votes.

A Super PAC run by McConnell allies piled on Bannon this week. “We have said from the beginning that Bannon would be a liability for any Senate candidate who embraced him, and now that he has openly turned on President Trump, it’s hard to see how his toxicity helps anyone,” wrote the Senate Leadership Fund in a statement. As the current landscape makes clear, however, Bannon's toxic brew can't be put back in the bottle that easily.