A trick of fashion: The bait and switch of "The Assassination of Gianni Versace"

Ryan Murphy's latest "American Crime Story" proposes a vision of opulence, but that's just to get our attention 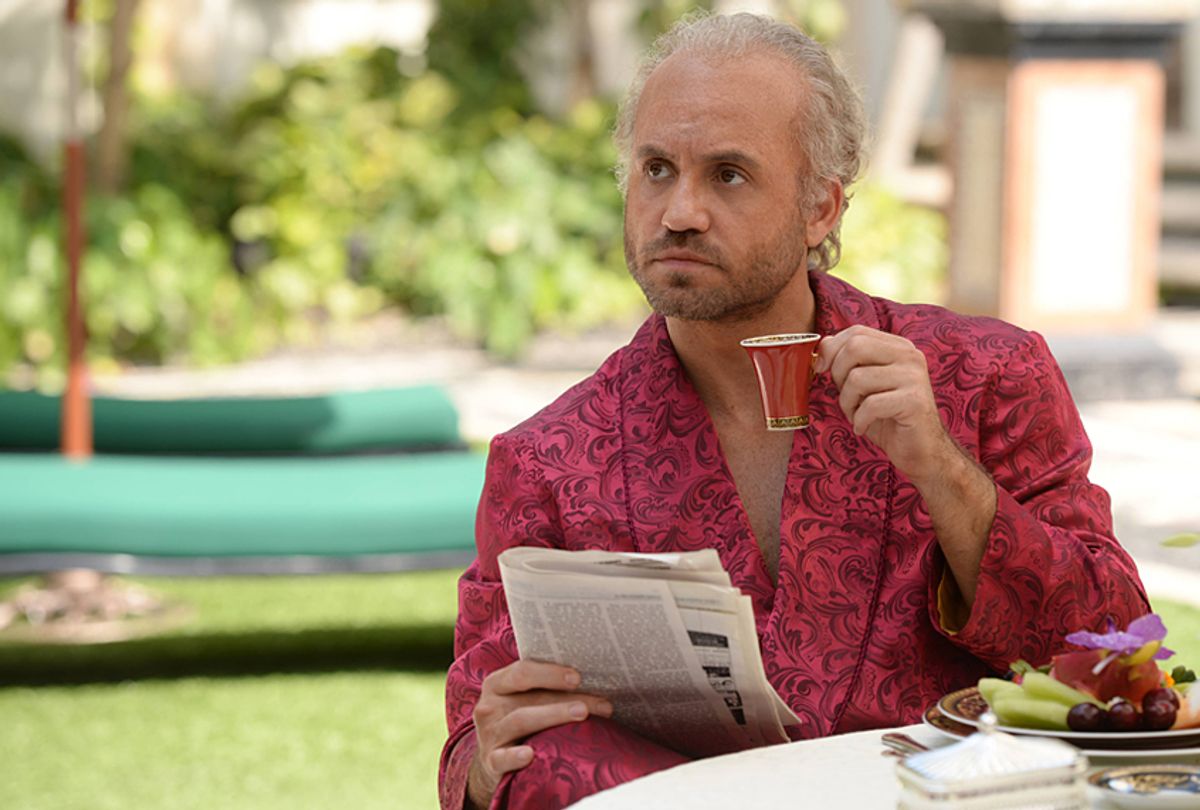 Gianni Versace’s legacy, his brand, evokes the art of commanding attention. Subtlety is not in the label’s DNA, and even at its most understated, hints of opulence sneak in to signal the glorification of luxury. Gaudiness is a virtue in the house of Versace, and in FX’s “The Assassination of Gianni Versace: American Crime Story,” premiering at 10 p.m. on Wednesday, extravagance leaps off the walls and inflames every inch of the hallways, tiles and stained-glass windows.

Aesthetics drive Ryan Murphy’s latest anthology installment as much as the story itself. More, actually, in some instances. One might argue said focus thematically aligns with the titular subject, but in making that assertion a person would betray an ignorance of the series’ true aims.

Fact is, Versace himself has less of a presence in the nine-episode limited series named for him than the man who murdered him, Andrew Cunanan. Accept this bait-and-switch and the squeamish implications of it, and you may find much to appreciate in this far-from-perfect examination of a crime remembered foremost for its brazen nature as opposed to any lasting resonance on its culture.

“The Assassination of Gianni Versace” is based on journalist Maureen Orth’s 1999 book, “Vulgar Favors: Andrew Cunanan, Gianni Versace, and the Largest Failed Manhunt in U.S. History.” Her reporting on Cunanan and Versace originally was published in Vanity Fair, and it is a meticulously rendered profile of Cunanan’s boundless hunger for wealth and status as well as his unmatchable skill as a fabulist.

Tom Rob Smith, who created the excellent series “London Spy,” channels Orth’s style and knack for detail into the script, particularly taking to heart Orth’s summation of Cunanan’s story as “a singular study in promise crushed.”

“The Assassination of Gianni Versace” seems to pore over every inch of that study in tandem, somewhat, with the designer’s biography and how those who loved him fell into conflict and struggled in the aftermath of his death to take the reins of what he had built. But the tale can be more accurately thought of as a crime story told in reverse, working its way backward to the beginning of two lives, one destined for great renown and the other careening toward infamy.

Cunanan gunned down Versace in broad daylight on the front steps of his South Beach villa in 1997. Murphy, who directed the first episode, captures the designer’s savage murder before the title card appears.

Like the series itself, the homicide is presented as an unexpected interruption of calm; the camera tracks Versace (Oscar Ramirez) in his final moments engaging in ordinary acts — awakening, eating breakfast served to him by impeccably clad servants — in an extraordinary fashion.

Through Ramirez’s embodiment of the designer’s quiet sensitivity, Versace becomes a living work of assured serenity. Cunanan (Darren Criss) is his opposite, a dazed young man in a t-shirt and shorts at the beach, contemplating the pistol he’s holding. Soon he’s screaming at the rolling waves.

Versace was the final victim in a string of murders Cunanan committed in a cross-country spree, taking the lives of former friends and strangers alike. But the fashion icon’s place in history was assured long before his death and far less defined by it than, say, O.J. Simpson’s association with his crime.

Besides, “The People v. O.J. Simpson” is a tough act to follow. The series' opening installment benefitted from the lasting cultural relevance of the case and subsequent trial.

Though it took place only a few years prior to Versace’s murder, the narrative surrounding the O.J. saga holds cogent parallels to modern conversations about race, gender and fame in America, and the way each is filtered and failed by an asymmetrical justice system. Simpson was one of America’s favorite celebrities, too — a star first and a black man second, some believed, until his arrest and darkened mugshot on the cover of Time magazine told us differently.

Murphy would have us view the circumstances leading up to and resulting in Versace’s murder as another parable of systemic injustice, positing that law enforcement’s thorough botching of the hunt for Cunanan, who was on the FBI’s 10 most wanted list by the time he made it to Miami, can be blamed on the rampant homophobia of the era.

Just because the creator of a piece declares that it stands for something does not mean that it does. While episodes show Versace and Cunanan facing bigotry in their separate lives, the police drama thread barely touches upon that idea. A subplot involving a team of Miami detectives portrayed by Dascha Polanco, Will Chase and Jay Ferguson is auxiliary at best, presented as if to let the audience know that yes, law enforcement was aware of the situation.

Every other aspect of the series favors its central players with such extremity as to obscure the procedural elements almost completely. But that’s the nature of this work; perhaps in a nod to its subject, every visual detail of “The Assassination of Gianni Versace” is immaculately curated, from Judy Becker’s attention-grabbing set design to its exemplary performances.

Not a hint of John Travolta weirdness is present in this cast. Penelope Cruz is a flawless stand-in for Versace’s sister Donatella, and Ricky Martin, playing Versace’s longtime partner Antonio D’Amico, is absolutely stellar. Even the cameos are outstanding, particularly Max Greenfield, utterly transformed into a rangy flophouse dweller befriended by Cunanan in the killer’s final days.

And while Ramirez turns in a robust performance that captures the quiet sensitivity of the designer, “The Assassination of Gianni Versace” places Darren Criss front and center.

Don’t get me wrong, the confident mélange of outrageous embellishment, quivering insecurity and frigid creepiness Criss exerts to create Cunanan is mesmerizing. His portrayal is such a coup that the viewer may soon overlook that they tuned in to this series expecting one man’s story and instead spending much more time with the man who killed him. Cunanan’s various relationships with his other victims Lee Miglin, Jeffrey Trail and David Madson receive a similar level of consideration as his stalking of Versace, and a late-season episode devoted to Cunanan’s relationship with his manipulative father (Jon Jon Briones) is as insightful as it is chilling.

Memorable fashion is often a triumph of artifice if not an unmitigated success. In that respect, “The Assassination of Gianni Versace” hangs together imperfectly, and its lines don’t quite flow with the level of unified elegance of its predecessor. Calling to mind the designer’s signature medallion, it is its own Medusa, beauty and horror in one long, complicated gaze. It doesn’t match its predecessor’s power to transfix the audience, but it is definitely worth seeing.