"Why do you do that to yourself, man?" Meyers questioned. "You just set off alarm bells." 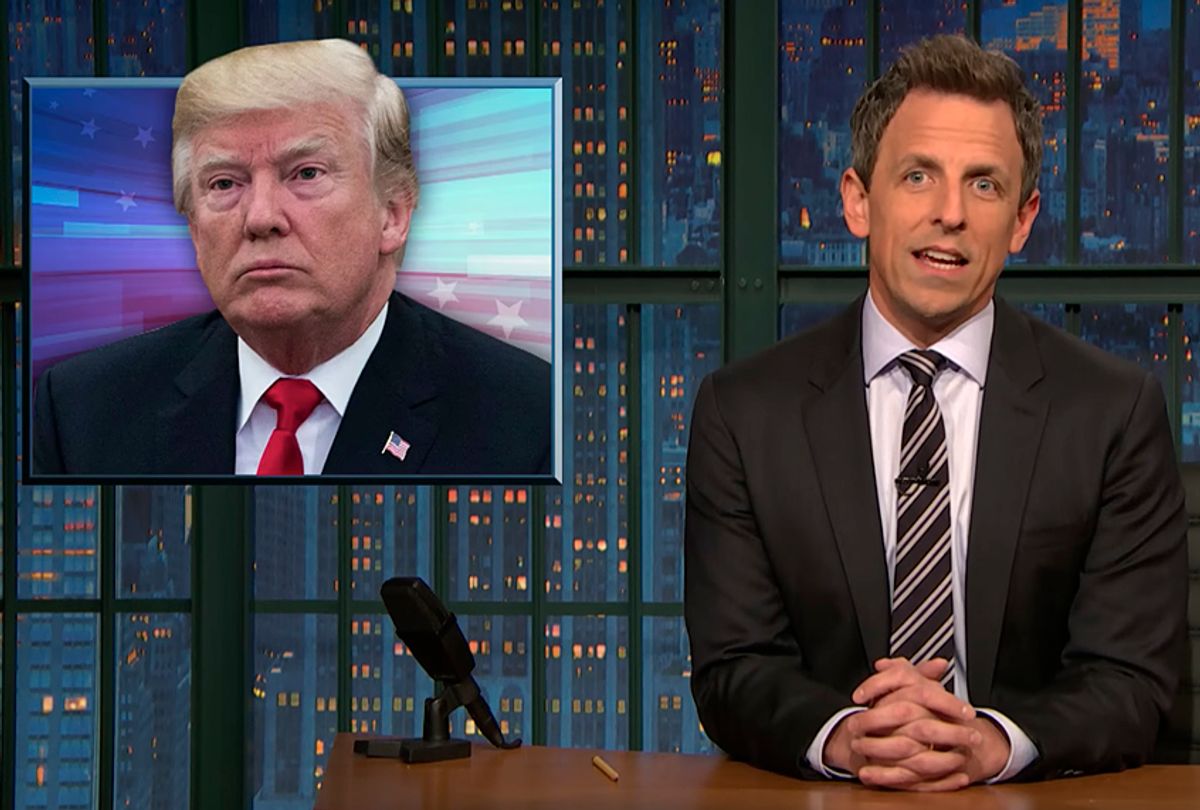 President Donald Trump has a pronounced habit of calling himself the "least racist person," particularly after saying very racist things. This time, he told a reporter Sunday exactly that, after being questioned about calling African nations "shithole countries" and saying he wanted less immigration from predominantly black places like Haiti and more from predominantly white places like Norway.

Monday on "Late Night," Seth Meyers offered some advice. "Why do you do that to yourself, man?" he asked. "If you’d just said, 'I’m not a racist,' then maybe you could muddy the waters and people would have to debate it. But when you say 'the least racist person,' you just set off alarm bells."

Meyers continued, "It’s the difference between saying, 'I’m a tall person' and 'I’m the tallest person on Earth.' With one, you go, 'Yeah, pretty tall, I guess,' and with the other, you go, 'Oh, he’s crazy.'"

"Also, let's not forget, this is a line Trump has used many, many times before, with little success," Meyers added. He then proceeded to show several of these occasions, where Trump repeated the sentiment in November 2015 and December 2015, in October 2016 and in February 2017, just to name a few.

"Why can't he just say 'I'm not a racist?'" Meyers asked. "Everything has to be a superlative with him: 'I'm the least racist, I've done more than any other president, this is the longest tie you'll ever see,'" Meyers mimicked Trump. "It's like he thinks there's a trophy for everything. 'You see that gold jug with the diamonds on it? I got that for least racist. I edged out the Dalai Lama.'"

Meyers went on to note how the politicians still defend Trump, even though fellow Congress members from both sides of the aisle have confirmed the harsh language Trump used in the meeting on immigration. He said that they are "finding new ways to blame everyone but Trump for his racist comments. Take Senator Bill Cassidy, [R-La.], who took issue not with the president's comments themselves, but the fact that they became public."

On Fox News, Cassidy said that the public broadcasting of Trump's meetings "undermines trust going forward." Similarly, Senator Rand Paul, R-Ky., took issue with "everybody" calling Trump a racist, rather than taking issue with Trump's comments themselves. Apparently, calling Trump a racist prevents healthy dialogue on immigration, while being an actively racist does not.

"What Trump's private comments reveal is that he doesn't actually want a merit-based system at all, he wants a system that takes in more white people and keeps out people of color. That's what he was saying in those comments," Meyers concluded the "Closer Look" segment. "It's as clear as ever that Donald Trump is a racist." No argument there.