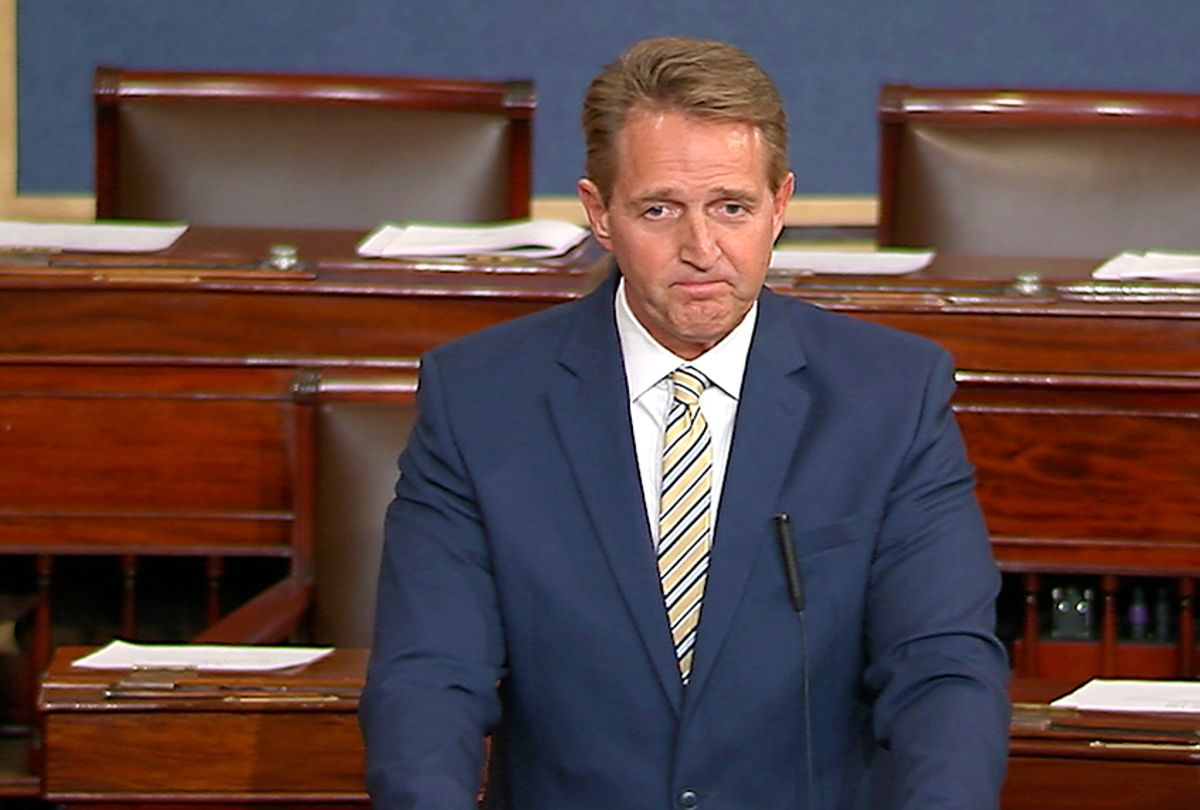 Soon after outgoing Arizona Senator Jeff Flake delivered his blistering Senate-floor speech denouncing President Donald Trump's attacks on both the free press and the concept of truth Wednesday,  many prominent Republican and conservative figures rushed to condemn it.

White House press secretary Sarah Huckabee Sanders denounced Flake by claiming that he "was recently defending an actually oppressive regime. He went to Cuba a few weeks ago and served as a mouthpiece for the oppressive Cuban government." She also attributed his decision to deliver the speech to "terrible poll numbers" (even though Flake isn't running for reelection) and argued that he's "looking for some attention."

Kelli Ward, a conservative Republican in Arizona who is seeking to replace Flake in the Senate, echoed Sanders during an interview on Fox News Radio with Todd Starnes.

"It was pure showboating on his side," Ward told Starnes. "He's enamored of being the so-called Republican leader of the resist movement and the never-Trump movement and he is taking advantage of his position as a senator to make these appalling disrespectful terrible statements. Remember that Jeff Flake has been very close to the Castro regime in Cuba and he has never used such harsh language against Cuban dictators as he did today against President Donald Trump."

Other prominent conservatives took to Twitter to both Flake and his speech.

One prominent Republican who supported Flake, however, was his colleague from Arizona, Sen. John McCain.

In a speech that compared Trump to Soviet dictator Josef Stalin, Flake argued that Trump's assaults on basic facts and truth, combined with his attempts to delegitimize the press, make him a threat to democracy.

"The free press is the despot's enemy, which makes the free press the guardian of democracy," Flake said. "When a figure in power reflexively calls any press that doesn't suit him 'fake news,' it is that person who should be the figure of suspicion, not the press."

Flake has not been alone in noting that Trump's attacks on journalists who criticize him may have ominous implications for democracy. The Committee to Protect Journalists responded to Trump's promise earlier this month to give awards to "fake news" outlets, by giving out its own awards to politicians throughout the world who have oppressed journalists.

"We wanted to raise the real issue of press oppression around the world, especially in light of the fact that 2017 was the worst year on record in terms of journalists jailed for their work," Courtney Radsch, advocacy director at the Committee to Protect Journalists, told Salon last week.