Tucker Carlson melts down on air, says "up yours" to elected official 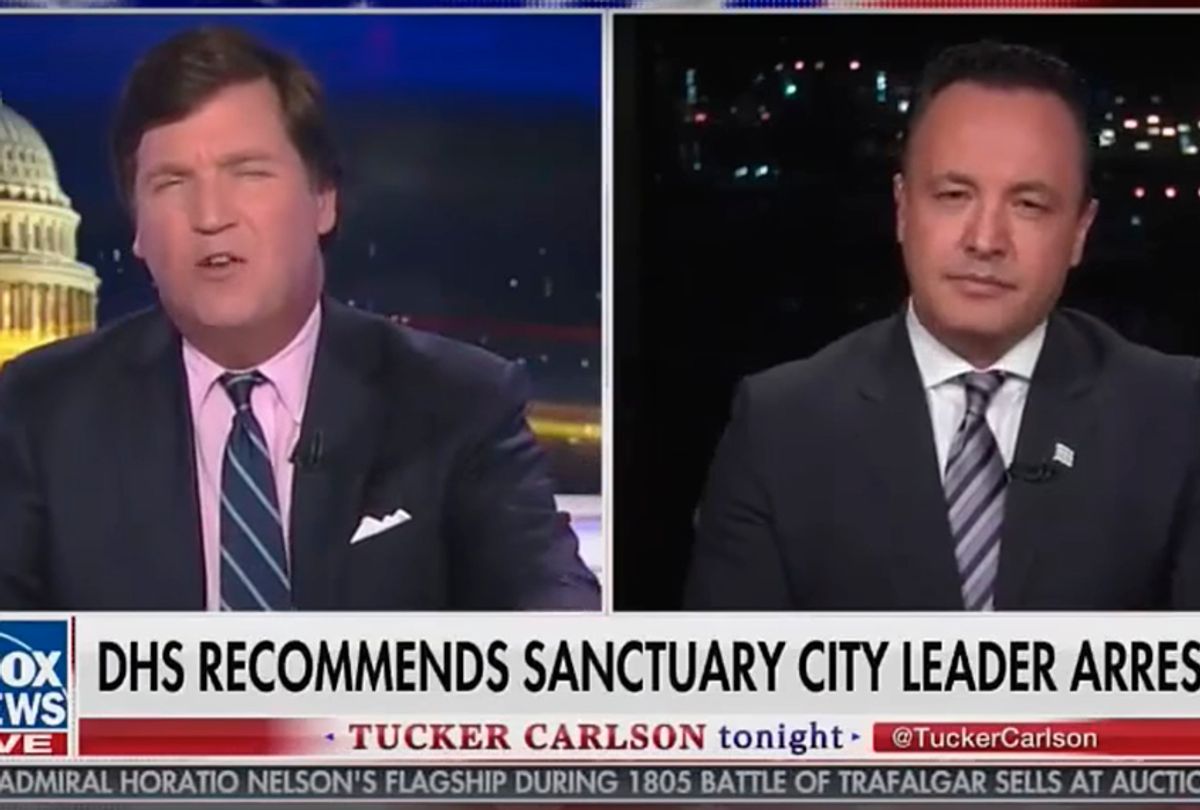 Fox News host Tucker Carlson has been ramping up his white-nationalist rhetoric over the last few months while also exhibiting a kind of angry recklessness previously unseen from the formerly establishment, club-tied Republican.

This mounting boil frothed over Wednesday night in a weather exchange with Chicago Alderman George Cardenas over so-called sanctuary cities in which he repeatedly called his guest a "loathsome little demagogue" and told him "up yours".

Carlson is a vociferous opponent of "sanctuary cities," known as a policy for state or local governments to not cooperate with federal immigration authorities on tactics such as holding undocumented immigrants beyond their release date. The Fox News host would not let go of the idea that American citizens had been slighted by men like Cardenas because of the policy, and Carlson demanded that his guest prove how citizens stand to benefit.

"Do you think that you have an obligation to represent American citizens first above people who are here illegally?" Carlson asked.

"Well, thank you, Tucker. I represent my citizens very well," Cardenas replied as Carlson interjected with laughter. "Everyone that comes through door — You want me somehow to get us, just guess, they have to be blue-eyed and blonde to be American?"

Carlson appeared to have quickly said, "You know what? Up yours," before cutting himself off. "It's ridiculous that you would even say something like that."

"Is that your test for citizenship? I don't know. I can't tell," Cardenas said.

Cardenas replied and said he meets all his obligations to all the residents of his area, and that he meets with many different types of people in Chicago, but that wasn't good enough for the Fox News host.

"How do Americans benefit from protecting illegal aliens in Chicago?" Carlson asked. To be fair to Carlson, Cardenas didn't have a real answer. But to be fair to Cardenas, it is not his job, nor is it in his ability, to separate undocumented residents from documented residents. Simply, he exists to help the residents of his district, not screen them. The point was lost on Carlson who was truly frantic by that time.

Chicago is the Holy Grail for conservative arguments. It's often utilized as a political vehicle to advocate for conservatives' staunch opposition to gun control and so they can draw equivalencies between illegal immigration, crime and cities that deem themselves sanctuaries.

Attorney General Jeff Sessions did just that in August when he said, "To a degree perhaps unsurpassed by any other jurisdiction, the political leadership of Chicago has chosen deliberately and intentionally to adopt a policy that obstructs this country’s lawful immigration system."

He added, "They have demonstrated an open hostility to enforcing laws designed to protect law enforcement — Federal, state, and local — and reduce crime, and instead have adopted an official policy of protecting criminal aliens who prey on their own residents."

But evidence overwhelmingly suggests this is much less a matter of "protecting criminal aliens" than of fostering trust between local law enforcement and immigrant communities. Yet because Chicago does not collect immigration data in police interactions, it can’t be known conclusively how many of its murders and gun crimes are committed by illegal immigrants "who prey on their own residents."

That absence of conclusive data to disprove Sessions doesn’t give him license to make claims that are groundless. Chicago’s sanctuary city policy does not protect undocumented people who commit crimes, despite what Sessions claims. Only the  microscopic sliver of ambiguity about conclusive data prevents us from labeling his statement "Pants on Fire," our lowest possible credibility rating. Instead, we rate it False.