Tucker Carlson guest: White supremacists may not be perfect, but at least they're not immigrants

"Arizona's future is as an Hispanic society," Mark Steyn said 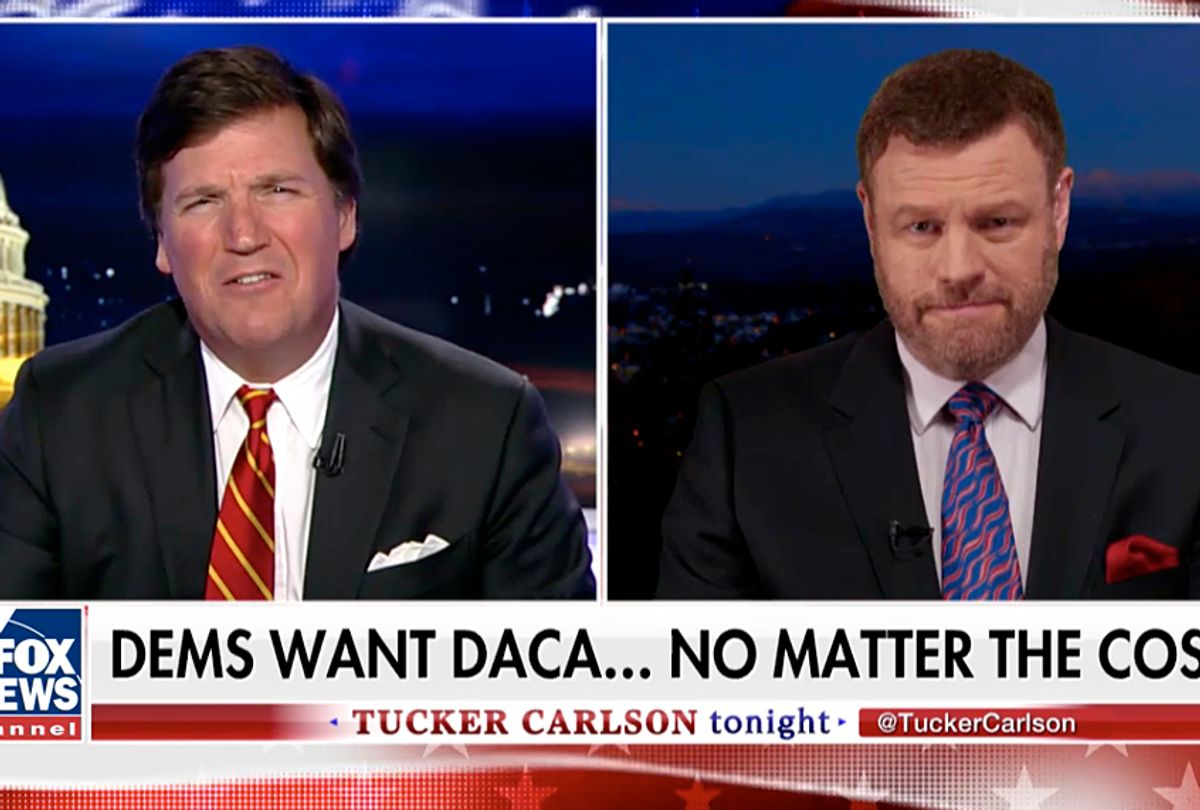 Tucker Carlson has been flirting with white nationalist rhetoric over the past few months. Case in point, thursday night, he and guest Mark Steyn — a Canadian-born immigrant and conservative commentator — lamented openly that the number of Hispanic and Latino people in Arizona are making the state less American.

"In Arizona, a majority of the grade school children now are Hispanic," Steyn said. "That means Arizona's future is as an Hispanic society. That means, in effect, the border has moved north, and the cultural transformation outweighs any economic benefits." Just to emphasize the point there, Steyn has just implied that being Hispanic, regardless of place of birth, disqualifies you as an American.

As well, Steyn launched into a angled defense of white supremacists with Carlson nodding in agreement. "Chris Cuomo went on to say that the real problem is white supremacists in America, they are the real monsters, not these nice, hard-working illegal immigrants," Steyn said. "And that may be well and true."

Fine, but Steyn offered a very odd, offensive "although" to the above. "I mean, for the purposes of argument, let's just say he's right, he added. "It's irrelevant. The white supremacists are American citizens. The illegal immigrants are people who shouldn't be here. And every — the organizing principle of nation states is that they organize on behalf of their citizens, whether their citizens are cheerleaders, or white supremacists, or whatever. You're stuck with them."

So, yes — Steyn's logic goes — white supremacists may not be perfect, but at least they're Americans, and thus better than illegal immigrants.

He continued, "And this preference that Nancy Pelosi and Chris Cuomo and increasing people have for actually importing a class of citizen that they prefer to the ones they are stuck with is actually very revealing."

Again, Steyn implies there is something wrong with siding with "nice, hard-working illegal immigrants" over people who use terrorism to enforce their false and corrupted notion that one race is essentially superior to another. It's a comment not so much revealing of the values of the Democratic leadership, as he would have it, but rather Steyn's.

Carlson has been going after so-called "sanctuary cities" on his program for a long time, but has ramped up his rhetoric over the past few months. On Wednesday, Carlson told off a Chicago politician who questioned his motives: "Everyone that comes through door — You want me somehow to get us, just guess, they have to be blue-eyed and blonde to be American?" That prompted Carlson to respond, "up yours."

Steyn has been very worried about the rise in minorities in white countries. Before complaining about Hispanic people — many of whom have claim to the lands in Arizona long before the United States existed — Steyn was claiming that when the Muslim population of a country hits 20 percent, "freedom disappears" as part of a long-running complaint that too many Muslims were living in Europe.

See the whole segment below, via Media Matters.