With anguish and defiance, Aly Raisman and dozens of other victims confront Larry Nassar in court

Nassar's plea agreement means every accuser can give testimony, and the number is growing 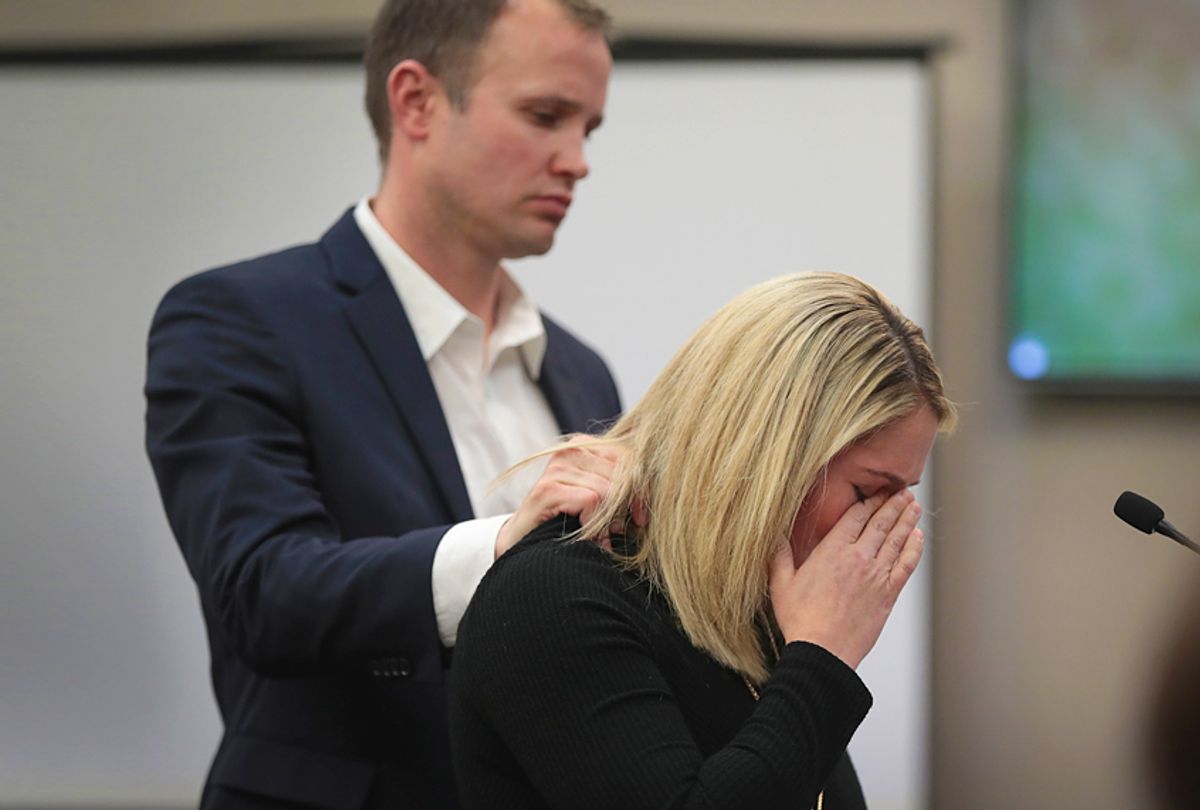 With her husband by her side, Chelsea Williams delivers a victim impact statement at the sentencing hearing for Larry Nassar. (Getty/Scott Olson)
--

Gold medalist Aly Raisman gave testimony Friday, on the fourth day of a weeklong sentencing hearing for Larry Nassar, the former doctor for USA Gymnastics and Michigan State University. The Olympian faced the convicted, telling him, "The tables have turned Larry. We are here. We have our voices, and we are not going anywhere." She also praised the "army of survivors" for speaking out against Nassar and described his actions as the "worst epidemic of sexual abuse in the history of sports."

The sentencing hearing comes after Nassar pled guilty in November to seven counts of criminal sexual conduct in Michigan and confessed to the sexual assault and abuse of girls under the cloak of medical treatment.

Olympic gymnast Jordyn Wieber also testified Friday, saying she was sexually abused by Nassar. "I thought that training for the Olympics would be the hardest thing that I would ever have to do, but in fact, the hardest thing I've ever had to do is process that I'm a victim of Larry Nassar," she said. "But even though I'm a victim, I do not and will not live my life as one."

Four out of five athletes of the 2012 women's gymnastic team say they were abused by Nassar. In the hearing Thursday, a statement from McKayla Maroney was read out loud. "As it turns out, much to my demise, Dr. Nassar was not a doctor, he in fact is, was, and forever shall be, a child molester, and a monster of a human being," she wrote. "He abused my trust, he abused my body and he left scars on my psyche that may never go away." Gabby Douglas also said via Instagram that she had been abused by Nassar.

Judge Rosemarie Aquilina said there were at least 120 victim statements to be read and that the number was growing. Numerous girls and young women testified this week, many of them claiming that they were first abused by Nasser when they were as young as 12 and 13 years old.

They described to the court experiences of going to him for treatment and the narratives were disturbingly alike: He would place them on their stomachs and then molest them or penetrate them with his fingers. "At only 12 years old, I had no idea that it was inappropriate, illegal and wrong," one victim said.

A graduate of Michigan State University, who says the abuse from Nassar started when she was 15, said in the hearing, "I am disgusted to my core that this man was able to harm so many under their responsibility."

Thursday, Nassar tried to halt the testimonies and wrote a letter accusing Judge Aquilina of turning the hearing into a "media circus" and complained that it was too hard for him to hear from each victim. "Spending four or five days listening to them is significantly minor, considering the hours of pleasure you had at their expense and ruining their lives," Judge Aquilina replied, after reading Nassar's letter out loud.

Many of the survivors see more than just Nassar as culpable for the abuse. Raisman said Friday that USA Gymnastics and the U.S. Olympic Committee, "have been quick to capitalize on my success," she said. "But did they reach out when I came forward? No." Raisman called for an investigation of those in leadership positions who may have knowingly enabled and protected Nassar. "If just one adult listened and had the courage and character to act, this tragedy could have been avoided," she said.

Similarly, many are questioning if a cover-up took place at Michigan State University. The New York Times reported that 14 people, including the University's president, had been alerted about Nassar's conduct and did little to nothing about it. "All enablers at MSU need to resign," Michigan students wrote in their newspaper, The State News.

As far as Nassar's sentence, Judge Aquilina promised that he will die in prison. "The next judge he faces will be God," she told one victim on Wednesday.