Automated "killbots" are a popular film trope. Will they soon be a reality? 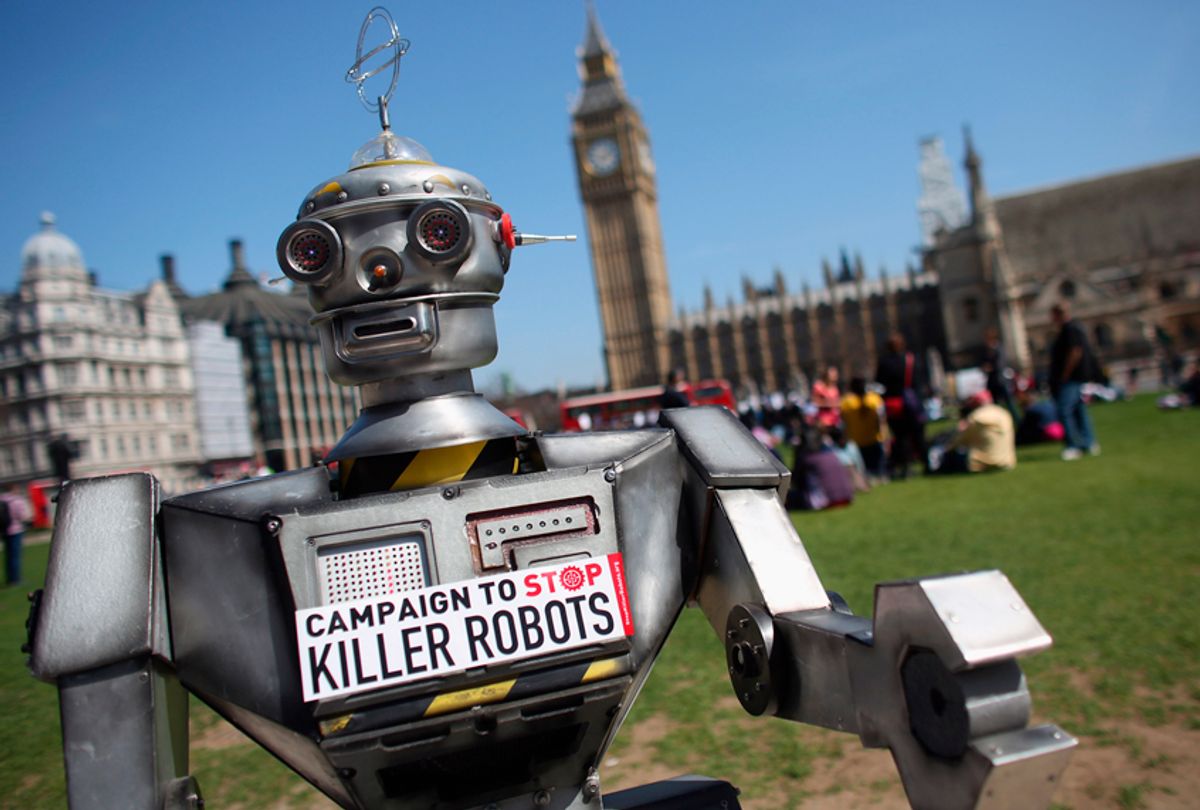 Last month, viewers of the popular sci-fi anthology show "Black Mirror" were treated to a story that was particularly terrifying because of its prescience. In the harrowing episode "Metalhead," a woman is chased by killer robots that appear loosely based on the Boston Dynamics robot “dogs” that have been making the rounds online. The technology displayed in that episode isn't too far removed from what engineers are developing (or have already developed). But while "Metalhead" has provoked a lot of discussion about its quality as a thriller, a more unsettling question has also emerged: Could this sort of machine actually be in humanity's future?

"We are still years away from perfecting this level of automation. But what makes this depiction so powerful is that all of the precursor technologies that would make it possible are already well-developed and in use," Ian Kerr, a professor at the University of Ottawa who specializes in ethics, law and technology, told Salon by email. "Although the necessary sensor devices have been in use for a long time, until recently, facial and object recognition technologies would have been the perceived obstacle — not yet sophisticated enough to enable the high levels of automation necessary to achieve these outcomes. But significant advances in processing power and in the field of machine learning are compressing the time periods in which this all starts to look real."

He added, "Perhaps most interesting, from a robotics perspective, the actuators needed to carry out such attacks are not all that sophisticated. That is what makes this depiction so frightening."

Toby Walsh, professor of artificial intelligence at the University of New South Wales and author of "It's Alive!: Artificial Intelligence from the Logic Piano to Killer Robots," had similar observations.

"There isn't off-the-shelf technology that would pose a threat to ordinary civilians today that terrorist organizations and other bad actors could buy," Walsh told Salon by email. "But we are not far away. I could ask one of my graduate students to build a rudimentary weapon based on currently available drones. It might take them a month or two."

Is there any public awareness on the issue of killbots? Sure, "Black Mirror" is a popular show and "Metalhead" a particularly acclaimed episode — but though sci-fi parables warning humanity of killer robots have existed since "The Terminator" series or the infamous Mechanical Hound in "Fahrenheit 451," a lot of people in the Western world don't seem overly concerned about killer robots in their own personal future.

"People seem less concerned than they should [because], even if they believe these technologies are near-term, they trust that such technologies will be used on others and not on them," Kerr explained. "We have seen this with drone strikes. But technologies like those depicted in [film] bring home the reality that what might once have been exclusively military technologies could soon be developed and used just as easily by a local police force or even some smart kid operating out of his parents’ garage."

Walsh had a similar point. "One problem is that the term 'killer robots' makes people think of 'Terminator,' which is still 50, 100 or more years away. But it is much simpler technologies, stupid AI and not smart AI that we need worry about in the near future. Unfortunately in every case but one (blinding lasers), we've had to witness the horror of the technology being used for it to banned."

He also added a rather sobering prediction: "I fear that we may too have to witness the horror of automated warfare being waged perhaps against an innocent civilian population before we decide to ban it."

In a strangely dark way, there is no more apt symptom of the moral quandary posed by early-21st-century technology than that which we see with killer robots. It is true that, as Kerr pointed out, the presence of killer robots "confuses current legal and ethical approaches," but there is also a deeper relevance when it comes to social, economic and political inequality throughout the world. To the extent that killer robots have had a terrible impact on real people's lives, it has predominantly been individuals in poorer and less empowered nations — for instance, the victims of President Barack Obama's drone strikes against Pakistan, Somalia and Yemen. Even many of the sci-fi stories popular in the West that show technology being used by the government often see it deployed primarily against "bad people" — such as how the "RoboCop" trilogy shows technology being used to stop crime.

Either way, like so many other technological developments once initially deemed merely ominous, it is likely that killer robots will eventually be the realm of newspaper headlines rather than fanciful fiction.