Getting past Bernie vs. Hillary: Signs of real hope for Democrats

If Democrats can finally put their endless 2016 hangover behind them, there's a massive opportunity just ahead 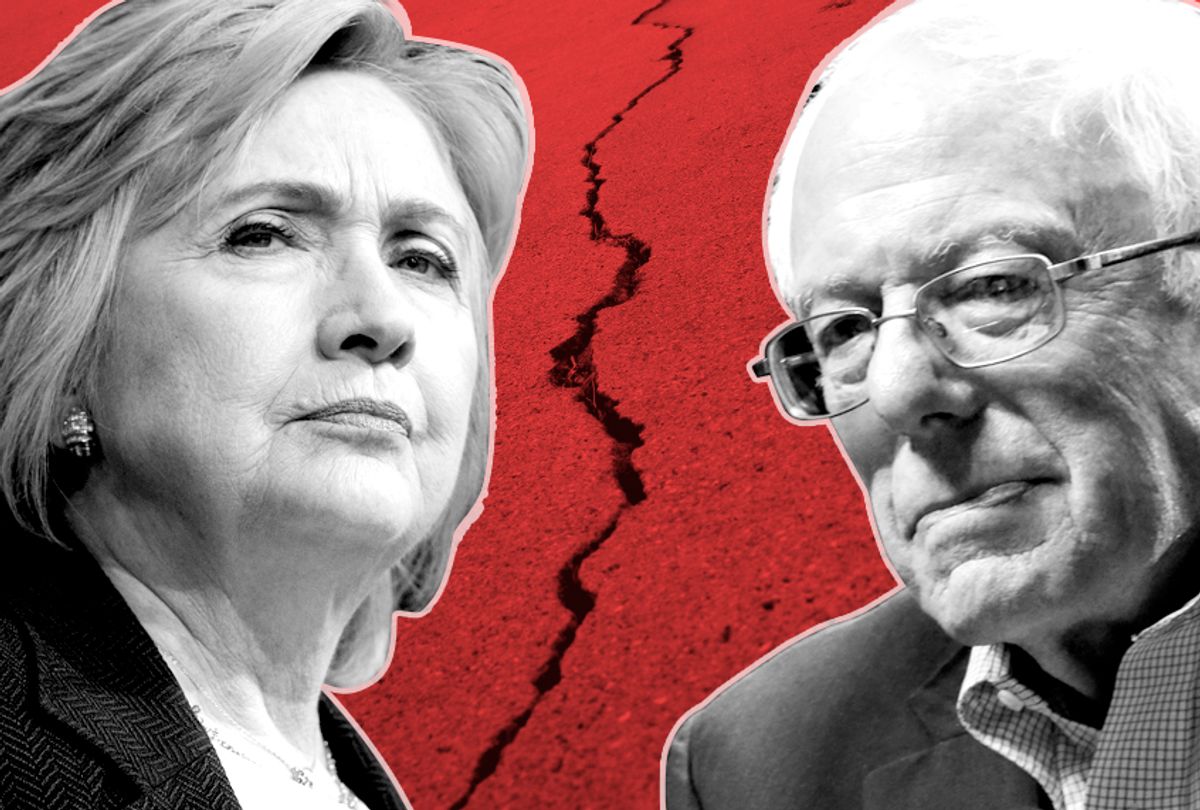 I have encountered an unexpected and perhaps unwarranted sensation lately, with respect to the Democratic Party. I think there are signs of hope. That hope comes with a countless array of qualifications and asterisks: The political landscape is still treacherous, full of pitfalls both obvious and hidden. (I mean, look at the state of the other party, the one that actually won the last election.) No one should underestimate the Democratic capacity for self-sabotage, which is deeply rooted in the party’s recent history as a chaotic coalition of competing interests with no clear ideology or core principles.

Too many liberals still appear to believe or hope that the current administration (and everything that led up to it) can somehow be erased from history by an almost literal deus ex machina. Robert Mueller or the slumbering conscience of the Republican Party (ha ha, I know!) or the blue tsunami on the horizon or some other Jovian intervention will make the entire Trump phenomenon un-happen. Newsweek actually ran an article last week floating a spurious alternate-universe hypothesis under which Hillary Clinton could still become president, which ranks at least an 11 on the 10-point “Hamilton elector” scale of anguished liberal self-trolling. (Here’s how it goes: Trump resigns or is impeached over Russia; same with Mike Pence. Then President Paul Ryan names Clinton as his veep — and OMG resigns himself!)

I’m still not convinced that the “blue wave” this coming November will be the resounding sweep many in the liberal quadrant are now hoping for, or that its consequences will include the impeachment of Donald Trump or the salvation of humanity. (I agree with the consensus that Democrats are now likely to win a House majority, and that I was overly pessimistic about that question.) It is also entirely possible that congressional Democrats have allowed Trump to outmaneuver them in the current DACA/shutdown battle, creating a situation where the correct moral and ethical choice is not the best political strategy. Such optimism as I see requires looking past short-term political damage and past the question of exactly how many seats the party will hold in Washington this time next year.

So where’s the hope? It pretty much boils down to this: The historic unpopularity and massively divisive character of the Trump presidency gives the Democrats some breathing room to get their s***house in order. While it remains true that being the anti-Trump party is not enough — and is not really an identity at all — it appears to be almost enough, at least for now. This is an enormous opportunity not just to win a congressional majority and elect a different president (those are actually the easy parts) but to begin rebuilding a left-liberal party from the ground up. It’s very far from a sure thing, but it might just happen.

No matter what your social media feed may suggest, Democrats are gradually getting over the poisonous Bernie-Hillary feud of 2016, which was never as important to actual voters as it was to highly energized members of the political-media caste. Please note: I am not endorsing the view that the issues that divided the warring “progressive” and “moderate” tribes were insignificant or entirely symbolic. It’s more complicated than that. There are fundamental questions of philosophy, ideology and policy that remain unsettled and may take years or decades to work through.

That latter point is especially true when it comes to foreign policy and “national security,” an area where a near-perfect circle of non-information and disinformation persists. Few voters are motivated by such issues except at moments when they command the headlines (as the Iraq War did in the latter stages of the George W. Bush administration), and still fewer bother to study them in any depth. Nearly everyone in both parties and in the national media, meanwhile, neglects to mention that there is widespread agreement on such issues across the elite political spectrum, based on a set of underlying assumptions about the nature of American power that is almost never discussed. That contradiction was captured in a caustic Onion story about the FISA reauthorization vote that went viral this week: “Pelosi: ‘We Must Fight Even Harder Against Trump’s Authoritarian Impulses Now That We’ve Voted to Enable Them.’”

Nonetheless I think it’s fair to say that in a medium-term, large-canvas sense the Clinton-Sanders rift is healing itself, if not quite in the way hardcore partisans in either camp might wish. It’s worth developing this idea a little, because I think two seemingly contradictory things are simultaneously true: The 2016 primary battle was a highly significant event in recent political history and it didn’t matter all that much to most Democratic voters.

An overwhelming majority of Sanders supporters voted for Clinton in the general election; had the nomination gone the other way (which was never likely, however it felt at the time), the reverse would have been true. Fanboys and fangirls of the two candidates continue to accuse each other of massive world-historical crimes on the internet entirely because of the unexpected and disastrous outcome of the entire process.

That’s understandable in human terms. But no serious person, in the fullness of time, will conclude that Donald Trump was elected president because the Democratic Party had a vigorous primary contest. (There is no clear historical correlation between a difficult primary campaign and what happens in the fall election, as Hillary Clinton’s husband can attest.) Yes, Clinton ran a poor general-election campaign, but, as has now become clear, her defeat was overdetermined by too many factors to count. Yes, it’s conceivable that Sanders could have beaten Trump, but that’s an unknowable counterfactual with way too many “ifs.”

The proposition that Hillary Clinton was such a flawed and despised figure that she was doomed from the outset to lose an election to the Worst Person Ever has exactly the same truth-claim status as the proposition that the crypto-sexist, crypto-racist BernieBro hordes torpedoed the First Woman President and paved the path to the Trumpian Reich. That is, neither one can be conclusively disproved, since they purport to explain what actually happened, but they’re both roughly 111 percent fake news, built on anecdotal evidence and faulty assumptions. In fact, they’re not categorically different from Donald Trump’s 3 million “illegal” voters — an invented excuse for a real-world event the inventor refuses to accept.

Considering the dismal and desperate state of the Democratic Party in the wake of the 2016 election — and the 2014 midterms, which in their own less charismatic fashion were just as bad — there’s plenty of room for blame and recrimination. But the idea that the party’s path forward lies in one side of the Bernz-Hillz battle forever banishing the other to the dustbin of history is found only among the Bad Vibes Brigade of the internet. Mainline Democrats were never going to purge or silence the energized millennials of the Sanders electorate, a course of action that would be disastrous if it were possible. Nor was the party ever going to rededicate itself to democratic socialism from top to bottom and march forward under the red flag.

Politics is the realm of the possible, the conditional and the half-baked, borderline-mendacious compromise, and we’re going to see a lot of that going forward. What we can say for sure is that no one in the left-liberal quadrant of American electoral politics wants to go through that again, and that almost every leading Democrat who appears to be testing the waters for a potential 2020 campaign is already positioning herself or himself as the ideal BernHill (or is it HillBern?), Binder of Wounds and Bringer of Gifts.

No one in the hypothetical 2020 field — with the possible and (one hopes) doomed exception of Joe Biden — is going to run against single-payer health care or a $15 minimum wage, as Clinton effectively did. No one will claim not to be the candidate of big ideas and sweeping policy changes, but rather the competent engineer who can repair broken machinery on the margins. (Give Clinton credit: As her memoir makes clear, she now understands that was a massive strategic error.) That alone represents a significant rhetorical victory for Team Sanders, and it’s not quite fair to say that political rhetoric doesn’t matter or that campaign promises have no effect on real-world policy — despite the glaring present-tense counter-example in the White House.

Consider the remarkable metamorphosis of Sen. Kirsten Gillibrand, formerly a middle-path, Blue Dog Democrat from the hinterlands of upstate New York who entered politics as a protégé of Bill and Hillary Clinton. (In Congress she represented a vast, largely rural district that had been held by Republicans for decades, as it is now.) Not only has she built a national reputation as a political leader of the #MeToo movement, Gillibrand has now created as much distance between herself and the Clintons as possible, and has seemingly embraced the Sanders wing’s positions on every high-profile issue.

A recent Daily Beast profile inquired whether Gillibrand was too ruthless and opportunistic to be president, which might have been amusing if it weren’t so blatantly and blindly sexist. No doubt it’s true that Gillibrand is trying to execute the calculated maneuver known as the “reverse Romney,” in sliding rapidly from the center toward the perceived progressive base, and it’s not unreasonable to question the depth of her conviction. But actions matter more than words, in politics as elsewhere. Like many other people in and around the Democratic Party. Gillibrand is clearly reacting to an intense popular hunger for a larger vision and a clearer sense of mission than the party has presented for decades.

Kirsten Gillibrand’s sincerity, or lack thereof, is not the point, and her caterpillar-into-butterfly act is not an isolated phenomenon. Sen. Cory Booker of New Jersey, another likely 2020 candidate closely linked to Big Pharma and the insurance industry, has suddenly emerged as an advocate of legal marijuana and a foe of mass incarceration. Virtually every elected Democrat from Chuck Schumer down to the local school board has rediscovered an appetite for big-think policy ideas and major structural changes. (Whether those people can wean themselves from the donor class that has drained away the party’s ideological coherence and class consciousness over the last 40 years or so is another matter.)

None of that means the Democrats’ internal crisis has been resolved, still less that the Sanders faction “won.” What it means is that the bitterness, irresolution and painful defeat of 2016 — and the resulting political, social and cultural crisis that has shaken America to the core — has presented the party with an unprecedented opportunity: It can win elections (or so it would seem) while reinventing and rebuilding itself at the same time.

There are any number of reasons to believe that will all go south, starting with the entirely plausible theory that America has become ungovernable and what we’re now witnessing are the death throes of democracy. But Democrats hold one important advantage: Republicans got a similar opportunity first, when they weren’t ready for it and didn’t think it would happen. It hasn't gone well, honestly. They responded by reinventing the party of Lincoln and Eisenhower as a racist criminal death cult and turning the federal government into a season of “Jersey Shore” directed by Hieronymus Bosch. So there’s probably nowhere to go but up.