Facebook promises to clean up its toxic news feed: Is that even possible? 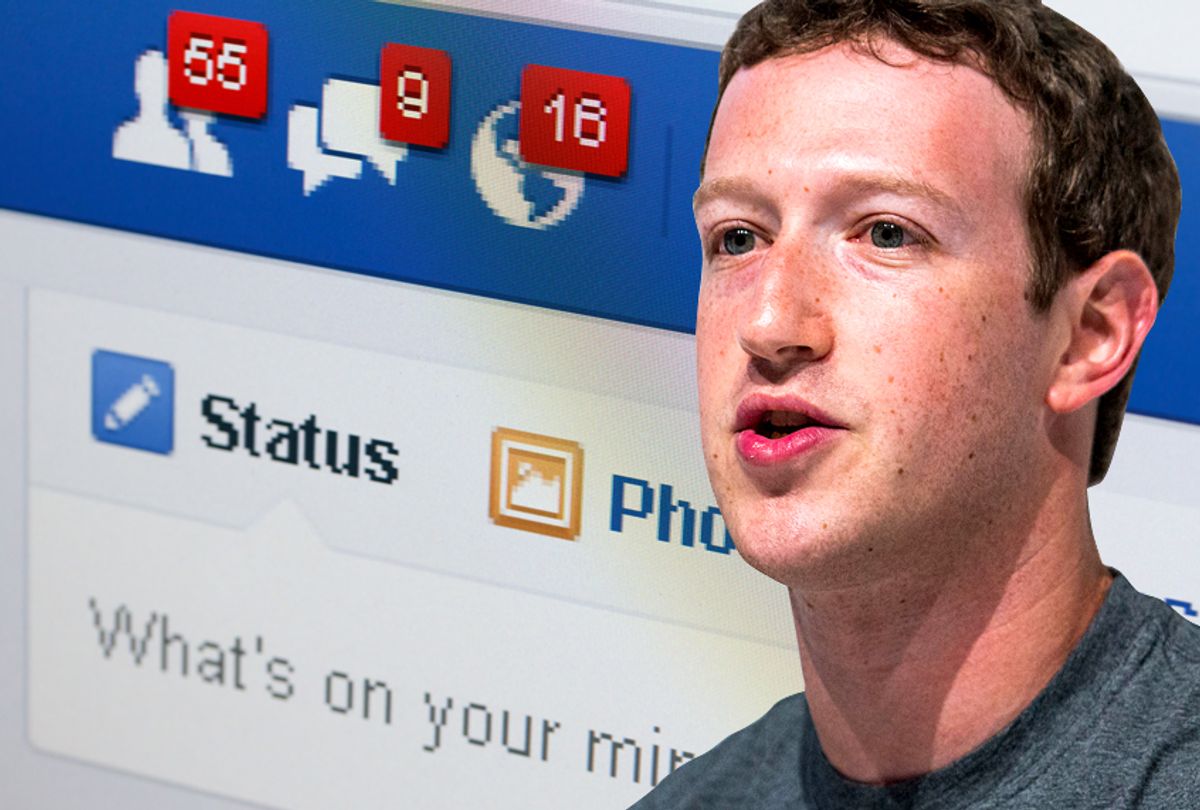 In a post shortly after New Year’s Day, Facebook co-founder and CEO Mark Zuckerberg vowed that 2018 would be be the year when he will “fix“ his social network. Last week, he announced that as part of that focus, Facebook will be attempting to clean up its News Feed Feature, the portion of Facebook that features a mix of updates from users' friends along with content posted by businesses, nonprofits and political organizations.

The most significant change, Zuckerberg wrote on Jan. 11, will be that “public content” from brands and media outlets will no longer be given as much prominence in users' feeds. Instead, posts from friends and family will be boosted.

“We feel a responsibility to make sure our services aren’t just fun to use, but also good for people’s well-being,” Zuckerberg wrote. He then referenced several academic studies that have shown that Facebook addicts who scroll through the site’s news feed for even relatively short periods of time end up feeling depressed as a result, whether from feeling that they’ve wasted time, a sense of information overload or an unhealthy desire to compare their own lives to the unrealistically positive narratives their friends are posting.

Citing other research claiming that online conversations with Facebook friends was psychologically more helpful to people, Zuckerberg wrote that the social network would give higher priority to posts “that spark conversations and meaningful interactions.”

In a Jan. 13 interview with Wired, Adam Mosseri, the Facebook vice president who runs the News Feed feature, stated that the company would be giving lower priority to published videos because watching them is a “passive” activity. He also said that content with long-winded comments posted would also receive higher visibility than posts with lots of “likes.”

Given the massive popularity of Facebook, it is no surprise that some online publishers have reacted negatively to the announced changes, which have been in the works for a while.

“The end is nigh,” a recent piece at the online media industry website Digiday began.

“It’s kind of strange, this mass de-prioritization,” an anonymous publisher told Business Insider. “We’ve been very much encouraged to build audiences here. People spend lots of money to build these operations. At some point it grows tiresome. You start thinking, over time, is this really worth it?”

In his Jan. 11 post, Zuckerberg argued that the news-feed changes were likely to resort in people spending less time on Facebook, at least in the short run:

Others in the industry argued that despite Zuckerberg’s high-minded rhetoric, the change was really about the bottom line, since the adjustments will not apply to advertising content.

“The goal of Facebook for a very long time has been to keep users on its pages as long as humanly possible. These changes are really about forcing publishers to pony up,” a digital publishing veteran told Salon. The source did not wish to be named for fear of offending the social media giant.

In his Jan. 11 note, Zuckerberg did not address another pervasive criticism that Facebook has received: that it enables junk websites that deliberately fabricate or exaggerate news items in order to get angry fans to read, click and share posts. Several publications, including Salon, have written extensively about how influential such publications are, especially on the right, where several low-quality or "fake news" sites were found to be more influential than Fox News on Facebook during the 2016 presidential election.

Despite some modest efforts by Facebook to enlist a few underfunded fact-checking groups to help it tag debunked content, the fake news tsunami on the social network has not subsided at all. By contrast, Google has succeeded to a much greater degree in striking at the business model of spam publishers.

In large measure, this is because Facebook places almost no restrictions on content that can be advertised. As of this writing, Facebook seems only to disallow ads for specific stories that have been fact-checked. It will happily take promotional cash from junk web publishers who want to push their other articles, however. Given that most of these sites have almost no overhead and many have been making millions of dollars a year, shelling out a modest sum off the top to Facebook is something they can easily afford. Paying people to paste spam comments into posts would be easy to do as well.

According to one person familiar with the tactics of such sites, several have figured out they can just pay people to boost content in a manner that would comply with Facebook’s new proposals.

“Expect to see a lot more profiles featuring boobalicious 50-year-old women who love Jesus and Donald Trump to be sharing the same sort of stuff you see now,” the person said. “The margins will be smaller but ultimately, nothing will change.”

On Friday, the Facebook chief acknowledged the issue in a passive manner in a post bemoaning "too much sensationalism, misinformation and polarization in the world today." Zuckerberg also announced a new initiative to survey Facebook users to have them determine the credibility of news sources.

"The idea is that some news organizations are only trusted by their readers or watchers, and others are broadly trusted across society even by those who don't follow them directly," Zuckerberg wrote, adding that the opinions of people who hadn't heard of a particular news source would be excluded.

In his post, Zuckerberg indicated that the "news quality" survey was his attempt to remove the company from making value judgments about media outlets and to avoid consultation with "outside experts," whose objectivity would invariably be questioned.

Almost certainly, the idea is going to provoke strife in the political realm, largely because conservatives, especially those on the far right, get their news from sources most other people have never heard of.

In a 2014 Pew Research Center poll, only 45 percent of respondents said they knew who Sean Hannity was, even though he has been the host of a prime-time evening news program on Fox News Channel for about 20 years. The study found that only 35 percent of respondents knew of the Drudge Report, the conservative news aggregator that has been popular among news junkies for two decades. An even smaller number, 15 percent, had ever heard of Breitbart News.

The only right-leaning outlet that has almost universal name recognition is Fox News Channel which, thanks to its polarizing effect, is simultaneously the most trusted and distrusted major news operation.

Added together, the conservative media's isolation and Facebook's desire to ignore professional reputations in favor of asking its users to determine news outlets' merits is likely to create a problem. It will either resort in a profusion of exaggerated or fabricated stories flooding into users' news feeds, or it will result in complaints about Facebook's perceived unfairness to conservatives.

While Facebook has offered a few clues as to how its news-feed changes will impact users and publishers, the company admits that it still has not quite figured out its strategy.

“This change will take some time to figure out,” Campbell Brown, the former NBC reporter who is now Facebook’s head of news partnerships, told publishers in a Jan. 12 message. Off the record, the company has been telling legitimate news sites that their content will still have a chance in users’ news feeds but has not provided much in the way of specifics.

The new policies have underscored just how powerful the company has become in the global media landscape. As things stand, Facebook is the news source for about 47 percent of Americans, half of whom say they don’t turn to any other social media outlet.

“I think that news is going to remain highly popular on Facebook because people will always want to know about the world and their communities,” David Chavern, CEO of the News Media Alliance told Poynter. “This change does highlight, however, the power of Facebook to decide (and alter) the kinds of information that people are exposed to. It is an incredible power that carries incredible responsibilities.”