Beyond the shutdown: Bipartisan dysfunction masks a deeper crisis 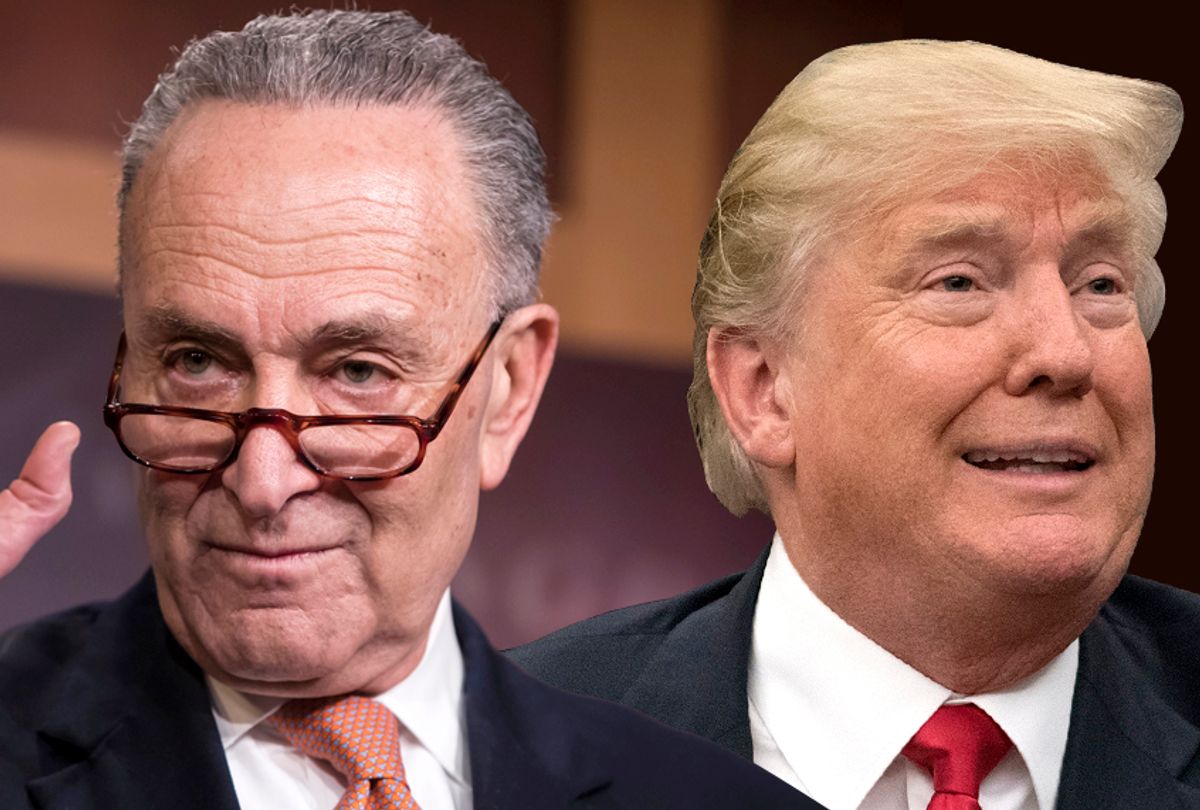 This article originally appeared on Insider NJ. Republished by permission.

According to the corporate media narrative, last weekend’s federal government shutdown was a quirky parlor game played by a political class using it to edge out a competitive advantage in the next election. That takes the sting out of this bipartisan betrayal of the public trust by putting it in the context of a national economy the media claims is humming along, with a stock market that, supposedly thanks to President Trump, knows no ceiling and an unemployment rate that is at near-record lows.

That narrative explains that our “economic upswing” is courtesy of Trump’s tax cut, which has released the animal spirits of investors. Main Street America is about to be flooded with $3 trillion in repatriated multinational cash that will lift all boats, or so the story goes. So what if the millionaire Beltway class wants to play games over the operation of the federal government? We know the essential stuff like the military, the Postal Service and the distribution of Social Security checks will continue. Put the popcorn in the microwave and enjoy the free Trump-Schumer show.

But what if in reality tens of millions of American households were continuing to struggle from paycheck to paycheck and our national political leadership was helping add to this cohort of underreported misery by furloughing close to a million federal workers? What if it turns out that letting the Children Health Insurance Program, which covers 9 million working-class kids, expire months ago means that a doctor misses a serious diagnosis? It is an abstraction for these folks. They have insurance, both the media talking heads and their elected officials and professional partisans.

Both the corporate media complex, our Congress and our “billionaire” president are insulated from the real economy that has nothing to do with the stock market but everything to do with evictions, bankruptcy, utility shutoffs, suicide and opioid addiction. These stories are reported, if they are reported at all, as unique data points without context. "Hmm, for the second year in a row American life expectancy is on the decline. That’s too bad, but I feel pretty good."

What’s a tad ironic is that President Trump touts the very same Bureau of Labor Statistics on unemployment that during the 2016 campaign he said were “phony-fake” data points that failed to capture the increasing squeeze play felt by working-class Americans. Candidate Trump knew better. He drilled down on the Bureau of Labor Statistics Labor Force Participation as a more revealing data point. The latest data indicates that as we closed out the first year of the Trump administration it was stuck at 62.7,  a near-historic low.

Trump’s campaign pitch worked. And in states like Pennsylvania, Michigan, Ohio and Wisconsin, in 200 counties that had voted for Barack Obama twice, white voters went with Trump while African-American turnout slipped. Of course, history never happens for just one reason. Did eight years of an African-American being president and Trump’s nativist racist rhetoric motivate the billionaire’s base? For sure. Did Hillary Clinton help him out by not visiting Wisconsin and taking labor for granted? Absolutely.

In the here and now, the underlying social and economic conditions still exist in these places that see globalism and the “browning of America” as an existential threat. Anecdotes about an isolated new factory opening up doesn't come close to the major realignment that’s necessary to fix decades of hollowing out.

For Christmas, Trump's Department of Labor rolled back an Obama-era requirement that restaurant wait staff could personally hold on to their tips. Now they have to turn the tips over to management, for the latter to disburse as it wishes. That’s how it has gone: Worker and environmental regulations rolled back as required by industry (especially if Obama put them in place).

The Wall Street business press heralds wage gains, but if you look at the latest BLS data, released earlier this month, America remains very much a “StuckNation” a year into the Trump presidency. The BLS reports that between December of 2016 and December of 2017, the real average hourly wage went from $10.70 to $10.74. America remains a part-time workplace, with the average work week going from 34.4 hours in December of 2016 to 34.5 hours last month. Factoring in the 2.1 percent increase in the consumer price index for basics, paid by urban consumers, workers actually lost ground.

What’s not depicted even in those statistics is that since the 1970s conditions have steadily deteriorated for American workers. Even as productivity increased, those gains went to the very top, as unionization declined and globalization took hold. Workers  were extended consumer credit, so it felt like they were living their parents' lives, but they were not. And then they sold their children into debt slavery when they sent them to college.

During the 2016 presidential campaign, the New York Times flagged the fact that both Clinton and Trump were largely ignoring housing, one of the nation’s most pressing issues. “We don’t have a full-voiced condemnation of the level or extent of poverty in America today,” Matthew Desmond, a Harvard professor of sociology ,told the Times.“We aren’t having a serious conversation about the fact that we are the richest democracy in the world, with the most poverty. It should be at the very top of the agenda.”

Desmond’s book “Evicted: Poverty and Profit in the American City” raises the curtain on an enduring legacy of the Great Recession largely ignored by the corporate news media. Millions of Americans, including infants and the elderly, are evicted from their homes every year because they can’t afford their rent.

In the 2008 Wall Street mortgage heist, and the Great Recession that followed, Main Street lost $20 trillion in household wealth. For African-Americans, while President Obama was in the White House, household wealth dropped by historic levels.

Last year, CareerBuilder reported that almost eight out of 10 American workers told survey takers they lived from paycheck to paycheck. Several years after the so-called end of the Great Recession, Mike Erwin, a spokesman for CareerBuilder, told CBS the trend was troublesome. “Living paycheck to paycheck is the new way of life for U.S. workers,” Erwin told CBS. “It’s not just one salary range. It’s pretty much across the board, and it’s trending in the wrong direction.”

Decades ago, before our politics became so small and petty,  the economic well-being of the mass of the American people was the concern of leaders like President Franklin D. Roosevelt, who floated a proposal for an economic bill of rights in 1944:

In 2018 we're lucky if our leaders can keep the government open.