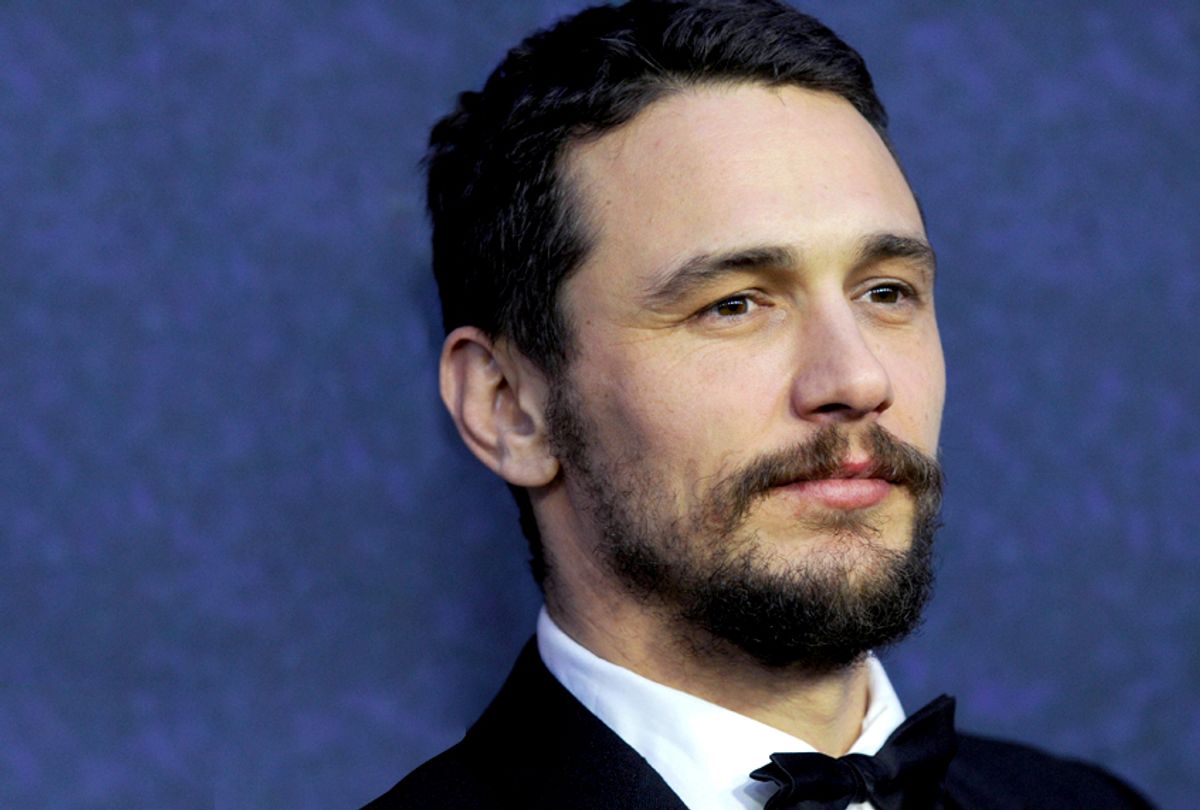 The Hollywood Reporter has confirmed that the decision to digitally remove the actor came after allegations of sexual misconduct mounted against him. "We made a decision not to include James Franco on the Hollywood cover once we learned of the misconduct allegations against him," a Vanity Fair spokesperson told The Reporter.

As far as Franco, the Reporter says that:

According to multiple sources familiar with the shoot, James Franco sat for a photo shoot and interview and was to be featured in the magazine's Annie Leibovitz-shot portfolio. He was removed from the cover digitally, however, due to allegations of sexual misconduct that surfaced in the wake of his Golden Globe win for "The Disaster Artist." Subjects for the Vanity Fair cover are often photographed separately in small groups and combined via digital imaging — Franco's removal, then, did not require a reshoot. That said, it's highly unusual for a star to be removed from an elaborate photo layout, especially so close to publication.

Franco has halfheartedly denied the accusations that first surfaced on Twitter during and after the Golden Globe Awards ceremony earlier this month. He's also taken exception with the allegations reported in a Los Angeles Times exposé, which included five women accusing Franco "of behavior they found to be inappropriate or sexually exploitative."

While Franco maintains his innocence, he told Stephen Colbert during an appearance on "The Late Show" this month that "I pride myself on taking responsibility for things that I’ve done," Franco added, "The things that I heard that were on Twitter are not accurate, but I completely support people coming out and being able to have a voice because they didn’t have a voice for so long. So I don’t want to shut them down in any way. It’s, I think, a good thing, and I support it."

The reveal of Vanity Fair's annual Hollywood issue cover, while highly-anticipated, is often marked with some sort of controversy. This year's visual mistakes, such as the appearance that Reese Witherspoon has three legs and that Oprah Winfrey has three hands in a behind-the-scenes photo, are fairly minor compared frequent stumbles over representation. In past years, magazine has been criticized for failing to feature people of color and women over a certain age on the cover.

To Vanity Fair's credit, it did respond to the confusion about Witherspoon and Winfrey's extra body parts.

What's becoming clear through stories such as this is that, like the Golden Globes, this year's Academy Awards ceremony will be inseparable from #MeToo, Time's Up and the reckoning taking place in Hollywood. In that sense, the Hollywood issue cover is following suit.

And, yet, it's not so simple. A HuffPost reporter questioned the omission of Franco from the Oscars' Best Actor and Best Director categories this year — which many feel is in response to the allegations against him — when the awards have history of honoring accused abusers. The article specifically highlighted the alleged physical assault by Gary Oldman of his wife in 2001. It is, however, unlikely that Franco was removed from contention due to the allegations as the nomination process was already nearly complete when those they surfaced in the media.

Yes, the industry is encountering difficulties, like many of us, while navigating this new era in which women are being listened to in ways they never have before. But there are minor victories attached to this year's Oscar ceremonies.

For one, Casey Affleck has decided to opt out of presenting the Best Actress award in this yearm something he would normally be expected to do having won Best Actor for his for his role in "Manchester by the Sea" in 2017. He has also declined to attend the awards altogether.

Last year, Affleck went largely unscathed, and richly awarded, despite accusations of sexual misconduct from two former colleagues against him. What a difference a few months make.